Taylor Swift: “I Love Jason Isbell.” “Cover Me Up” Becomes a Standard 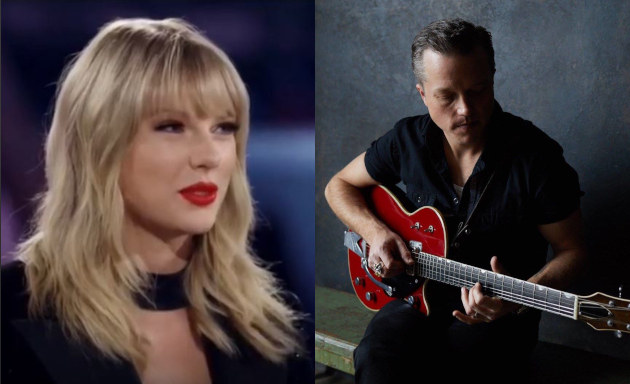 There was a time in music where quality songs, regardless of where they came from, would find their way through the music system and ultimately rise to the top and stay there for an extended period, often being covered by numerous artists and sometimes becoming big hits—songs regularly referred to as “standards.” In today’s fractured and often shallow culture, standards generally feel like a thing of the past. The celebrity status of the performer appears to be the most important thing to people, not the songs they sing.

A song that would pass for a standard these days would be something like Old Crow Medicine Show’s “Wagon Wheel.” It was covered by many and eventually became a big hit for Darius Rucker. But that song’s been so worn out, people are tired of hearing about it. A better example might be “Tennessee Whiskey,” which was a quality song for David Allan Coe in 1981, then became a hit for George Jones in 1983, then was an even bigger hit for Chris Stapleton in 2015. Here four years later, “Tennessee Whiskey” is surprisingly still one of the biggest songs in country when it comes to streaming numbers and downloads.

But these are the exceptions, not the rule. Standards just feel like a thing of the past. But there’s another song that appears to not only be withstanding the test of time, but slowly growing in popularity and stature to where it’s beginning to feel like it should be considered a legitimate standard of country and Americana music. We’re talking about Jason Isbell’s “Cover Me Up.” It was the first song on Isbell’s breakout record from 2013, Southeastern.

The Zac Brown Band was the first mainstream act to recognize the power of the song, and recorded it acoustic style for a Spotify exclusive back in 2017. Then the mullet-headed Morgan Wallen of all people covered it earlier in 2019, first as an acoustic video that went viral, and based off that reception, Wallen recorded a studio version that actually charted at #46 on the Billboard Hot Country Songs chart, even with little promotion behind it. Then Rodney Atkins got in on the act, cutting the song as part of his 2019 album called Caught Up in the Country released in May.

On NBC’s The Voice Monday night (10-28), a contestant named Jake Hoot performed “Cover Me Up” as part of the singing show. For some independent music fans, it may feel like a clashing of worlds, similar to when a Cody Jinks song appeared on American Idol. Taylor Swift, who was acting as a coach on the episode, even remarked “I love Jason Isbell,” when Jake Hoot said he was covering “Cover Me Up.” That’s right, Taylor Swift has now given Jason Isbell a ringing endorsement (at the 1:15 mark of this video).

The power of Jason Isbell’s “Cover Me Up” is undeniable. And though Isbell’s dedicated fans will never feel comfortable with the song being sung by anyone but Jason as wife Amanda Shires stands at his side, it’s obviously something the resonates deeply among general audiences. There was a time when compositions from artists like Guy Clark, or John Prine, or Dean Dillon (who co-wrote “Tennessee Whiskey”) would regularly find their place among popular music simply from the power of the song. “Cover Me Up” rising from vast catalog of modern music to become a standard is a good sign of the re-emergence of quality back into the mainstream.

Jason Isbell recently concluded his yearly sold-out residency at the Ryman Auditorium, and announced at his final show on October 26th that he’s heading into the studio in December to record a new album. Isbell is one of the few truly independent stars who’s found mainstream acceptance. His last record The Nashville Sound from 2017 was nominated for a CMA Award—something many Isbell and independent fans never thought possible. But they probably never thought it possible that “Cover Me Up” would be performed on primetime television either. But that is the power of the song.