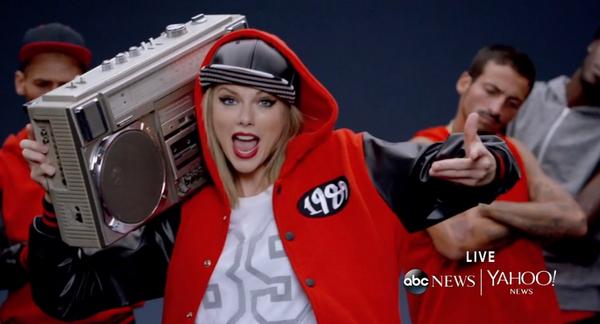 Monday afternoon (8-18), Taylor Swift conducted a 30-minute Yahoo! online stream from New York City in front of a live audience with all the irrational exuberance of a Ron Popeil infomercial, where she unveiled a new song called “Shake It Off,” announced that her new album 1989 to be released on October 27th, and after a protracted explanation, made it abundantly clear that this new album will be her “very first documented, official pop album.”

So yes country music, see you later. And sorry Country Music Hall of Fame, but your education wing is now forever named after a pop star who has officially featured twerking asses in one of her videos.

After unveiling her new single, the second portion of the informal Taylor Swift press conference played out like a protracted scene of a nasty breakup where the heartbreaker can barely muster the guts to spit out the bad news. In fact he word “country” was never uttered once throughout the presentation, and it was left very much up to the audience to put together what exactly Taylor Swift was trying to imply.

Along with the portions of Taylor Swift explaining the late 80’s influence to her new album, this is how the scene transpired.

We went into the studio and decided it was our #1 priority to make a song that sounded nothing Max and Johan [Shellback] had done, and sounded like nothing I had done.

I like to work on albums for two years, because two years gives you enough time to grow and to change, and to, you know, change your priorities. Change where you live, change your hair, change what you believe in, change who you hang out with, what’s influencing you, what’s inspiring you. And in the process of all of those changes in the last two years, my music changed. So, what ended up happening was, I woke up every single day I was recording this record not wanting, but needing to make a new a new style of music than I had ever made before. So essentially, what ended up happening was, in my opinion, we made the most sonically cohesive album we’ve ever made. We made my favorite album I’ve ever made.”

“So the inspiration behind this record. I was listening to a lot of late 80’s pop because I really love the chances they were taking. I loved how bold it was. I loved how ahead of its time it was. And so being inspired by that, I started delving into the late 80’s and what that period of time actually meant. And what I found from asking people and reading up on it, and just really just diving into the late 80’s, was that it was apparently a time of just limitless potential. And the idea that you can do what you want, be who you want, wear what you want, love who you want, and you get to decide where your life is going. Bright colors, bold chances, rebellion. And the idea of that was so inspiring to me, and the idea of endless possibility was kind of a theme from the last year of my life.

And for the record, this is my very first documented, official pop album.

1) Who explained to Taylor Swift that late 80’s pop music was all about “bold chances” and “rebellion”? This is bold revisionist history, or at the least, a greatly slanted perspective.

2) Is the song “Shake It Off” in any way a departure from previous output of Taylor Swift, Max Martin, Shellback, or even what this team released on Taylor Swift’s last album? The answer is an unequivocal, “No.”

READ: Taylor Swift Is Leaving Country. But Will Country Let Her?