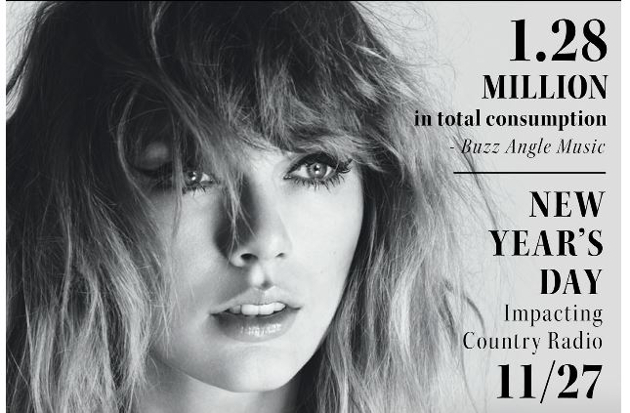 We were already alerted last week that Taylor Swift would be making the move back to country radio with her new tune “New Year’s Day.” But nobody anticipated just how aggressive this move would be. In short, Big Machine Records has launched one of the biggest ad campaigns for a country radio single in modern memory, and will not stop until “New Year’s Day” hits #1.

Taylor Swift’s new album Reputation sold 1.23 million copies in its first week, already making it the best selling album in 2017. “New Year’s Day” debuted at #57 on the Billboard Country Airplay charts this week, with impressive early numbers, including 1.3 million audience impressions led by strong spins in key markets on stations such as WUSN in Chicago, and KKBQ in Houston. But this tells only part of the story, especially since “New Year’s Day” is not officially going for adds on country radio until November 27th.

In this week’s edition of Country Aircheck—one of country radio’s most important weekly circulars—Taylor Swift is all over the place. Along with a full page ad pushing “New Year’s Day” to country’s radio professionals, four additional pages have huge Taylor Swift images embossing the left margin. Taylor Swift and Big Machine aren’t just making a play for country radio, they want to dominate it with “New Year’s Day.”

This is a major change of strategy from Big Machine and the Swift camp compared to the approach they took with her last record 1989 where Swift specifically requested Big Machine withhold the music from country radio. Though there’s not anything especially “country” about “New Year’s Day,” there were similar stripped-back songs on 1989 that could have been offered to country radio if Big Machine had chosen to, and Taylor Swift had signed off on it.

But Taylor Swift refused, and did so against the wishes of Big Machine as explained by Taylor Swift herself at the time.

“Even calling this record 1989 was a risk,” Swift said to GQ in 2015. “I had so many intense conversations where my label really tried to step in. I could tell they’d all gotten together and decided, ‘We gotta talk some sense into her. She’s had an established, astronomically successful career in country music. To shake that up would be the biggest mistake she ever makes,’ . . . I’d go into the label office, and they were like, ‘Can we talk about putting a fiddle and a steel-guitar solo on ‘Shake It Off’ to service country radio?’”

“I was trying to make the most honest record I could possibly make,” Swift continued. “And they were kind of asking me to be a little disingenuous about it: ‘Let’s capitalize on both markets.’ No, let’s not. Let’s choose a lane.”

In other words, as Big Machine was really trying to push Taylor Swift to remain country, she was putting up a big fight, later saying there was “like a dozen sit-downs” with Big Machine to hammer out the issue, with Swift eventually prevailing.

READ: The Lesson of Taylor Swift’s Success: Choose a Lane

This is what country fans and critics had been calling for when it came to Swift’s music for years: quit calling it country, and then we can perhaps respect it. So why the change in strategy all of a sudden with “New Year’s Day,” and why so aggressively by Big Machine?

One of the reasons their campaign to put “New Year’s Day” on the radio is so ostentatious is likely due to the failure of pop stars crossing over to country recently. Country is not like pop; the format likes to have a current, working relationship with an artist before allowing them to enter the format. We saw this when Justin Timberlake attempted to release “Drink You Away” to country radio, and the song didn’t even chart. Similarly, John Mayer’s “In The Blood” was released to country radio failed to chart. With Swift, some stations may be a little frustrated she didn’t release 1989 singles to country.

The worst thing Taylor Swift could do is release a song to country radio and have it fail, potentially shutting the door on making a country comeback record in the future. So if Swift and Big Machine were going to move on country radio, they had to move hard, and it must be successful. Both Swift and Big Machine are smart enough to know this, hence the war chest being opened to help put “New Year’s Day” in front of country stations.

But there’s another, bigger issue that is opened up with this aggressive move. Swift’s “choose a lane” strategy is what won her a lot of respect from country fans, and her biggest sales accomplishments to date. Swift was adamant on this point. Behind-the-scenes, is Swift happy about all this country radio promotion from Big Machine? Or is it a source of friction like it was with 1989? And what ramifications could this have for the country radio format, which over the last few years has been making small steps towards setting clearer boundaries when it comes to pop singles, and allowing more traditional country songs to bubble up?

Some are saying that regardless of genre concerns, Swift’s “New Year’s Day” is an improvement from many of country’s current singles. This may be true, but it also may set a bad precedent that if anyone is willing to spend enough money, they can make a move into country radio, even if the single isn’t appropriate for the format, and even if they’ve stated specifically that the music is pop. Does Taylor Swift think “New Year’s Day” is country? If it’s a success, will she release a second single to country radio?

This isn’t just the story of one song. All of a sudden, Taylor Swift has once again opened up the age old arguments about genre, the integrity of the country format, the encroachment of pop into country, and how the country industry should handle it. And will this create the same confusion among Taylor Swift fans that Taylor was concerned over when releasing 1989? Will this make Swift so ubiquitous that she could become over-exposed? Will this bring many of her critics back out of the woodwork, who retreated after she started calling herself pop?