On Labor Day weekend of 2011, artists and fans of independent/underground country and roots music from all around the country and world gathered in a big field just north of Cookeville, TN for the annual Muddy Roots Festival. Record heat on Saturday was chased by torrential downpours on Sunday, as the remnants of Tropical Storm Lee that made landfall in the middle of the Louisiana coast veered east into the deep South corridor.

As buckets of rain were falling on Muddy Roots, 950 miles away, in a portion of central Texas undergoing a drought of historic proportions, Lee’s remnants weren’t offering any rain, but whipping up massive winds. By the time one central Texas resident named Lucky Tubb was taking the Muddy Roots stage in Cookeville on Saturday, dozens of brush fires were burning out of control, causing massive evacuations, strapping local fire resources, and causing general panic back home. 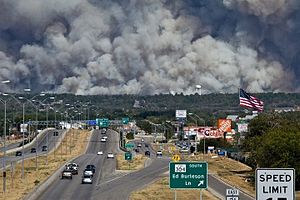 On Sunday, things got even worse. About the time the first drops of rain began to fall on The Muddy Roots Festival, back in Texas a massive gust of wind snapped branches off of a loblolly pine tree that was already under stress from the historic drought, knocking over power lines and starting what would become the biggest and most destructive of the 2011 Texas fires in the area is known as “Lost Pines” for it’s thick concentration of loblolly trees unusually-far west from the Piney Woods of east Texas. The Lost Pines are in and around the town of Bastrop, just east of Austin.

The fire quickly spread out of control, with residents forced to evacuate with little or no time to grab personal effects. The whole area between Austin and Bastrop became like a war zone, with massive evacuations and smoke bellowing into the sky. Lucky Tubb was . . . well . . . Lucky, and his home was not effected. However his brother and road manager Brian Kelly was.

He may not have any blood relation, but he’s definitely my brother. My best friend, my driver, my mechanic, therapist, hunting and fishing buddy, he’s the whole 9 yards. I’ve never had a best friend as close as Brian is to me. He’s my Hoot, just like Ernest.

The “Hoot” Lucky refers to is Hoot Borden, a legendary bus driver, and just like Brian Kelly, so much more. Hoot got his start driving for Lucky’s Great Uncle Ernest, but then moved on to rock n’ roll and was known and respected from people as wide reaching as Willie Nelson to Megadeth. (Read more about Hoot Borden). While in the Texas State Prison in Huntsville, Lucky decided the best thing he had going for him was his last name, and learned guitar from an old black man who was in for life. When he got out, Brian Kelly helped him get on his feet.

He started driving me around in his pickup truck when we first started doing shows. He’d load up all the stuff and drive me to these shows at his own expense. I didn’t have any money back then. Hell, I still don’t. He’s a wonderful person, and he’s still out here driving with me after all that time.

The Bastrop County Complex Fire destroyed over 1,500 homes, burned 34,000 acres, and Brian Kelly’s family’s land was right in the heart of the fire, on Cottle Town Rd. The 2 people that died in the fire lived on the same road as Brian’s property.

Everything I had out there is gone. Trucks blowing up, cars meting down. Motorcycles, 4-wheelers, boats, all my tools, pictures and family stuff that you just can’t replace. We’re talking 30 acres of stuff. I heard from one of my boys that a truck was 100 feet from where he left it because the gas tank blew on it. Chicken coops, animals, two outbuildings, workshop. 25 years worth of saving whatever you got. A lot of the stuff is financial, but some of the stuff is your life. Pictures and things. Titles, papers, and legal things, it’s all gone. 25 years of stuff that I’ve pushed, pulled, dragged, hold on to it, rat holed, set it somewhere, looked after it, move it around, store it in a shed.

I’d really been trying to liquidate down, so the things I lost were very close and personal. It’s like moving. Every time you move, you throw a little away until you’re down to the memories you want to keep. Driving down the road, I just keep thinking, “If I don’t have it, you can’t take it from me.”  My folks live on the other side. My dad just retired from Houston and they lost everything. He had just retired on Friday, then got evacuated Saturday.

Despite Brian’s loss, he never went home. He is still on the road, driving for Lucky who has a set of Florida dates to play before returning to Texas. He’s still by Lucky’s side like he’s been since Lucky was released from prison.

I’ve been there from the beginning, when we had to go out and book our own gigs, before there was an album, before “Generations.” We were working at an iron shop in Austin. We started playing little coffee shops and such.

I can go look at a big pile of burned up today, or I can look at it in a week. I still can’t bring it back. It takes a while for insurances and stuff like that, and the money you get is like tenths on the dollar. I don’t want to put a number on what I lost, but say 25 years of your life. Fire takes everything and you don’t get it back.

It sounds like Brian Kelly has some insurance and a place to stay in Austin, but if anyone wants to donate something to him, you can simply use the SCM donate button near the top right corner of the page. Make sure to put a note that it’s for Brian Kelly, and we will get it to him.

Lucky Tubb is this month’s guest on IBWIP.