This last weekend, the eyes of the country music world were affixed on the 7th Annual Stagecoach Festival in Indio, CA. Combining mainstream acts like Toby Keith and Lady Antebellum, with classic country acts like Marty Stuart and up-and-coming talent like Justin Townes Earle, Stagecoach and its 50,000 attendees comprise the starting gun for the summer’s big, corporate-run country music festivals.

But relatively unnoticed, and certainly less-covered in the national country media, the 25th annual Larry Joe Taylor Festival transpired outside of Stephenville, TX, with an equally-impressive 50,000-head crowd and a beefy lineup of Texas Country / Red Dirt headliners like The Departed and Jack Ingram, legends like Ray Wylie Hubbard and Chris Knight, and up-and-comers like The Damn Quails. The price of a Stagecoach? $239.00 for a general admission pass. Larry Joe Taylor Festival? $105 for five days of music instead of three. 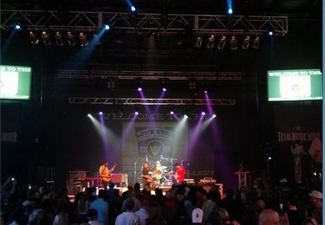 On the Sunday after the Larry Joe Taylor Festival, many of the same performers and patrons trekked down to the Texas Music Theater in San Marcos for the 5th annual Lone Star Music Awards. Big winners were the Turnpike Troubadours for Album of the Year (Goodby Normal Street) and Song of the Year (“Good Lord, Lorrie”), and Ray Wylie Hubbard for Songwriter of the Year, Singer/Songwriter Album of the Year (The Grifter’s Hymnal), and Producer of the Year with George Reiff (see list of winners).

Performers at the awards included Robert Earl Keen, Ray Wylie Hubbard, Cody Canada & The Departed, Jason Eady, and Grammy-nominated John Fullbright among others, with each act playing four or five songs. The event was completely open-to-the-public, and the price of admission was $5.

Robert Earl Keen was arguably the biggest winner at this year’s Lone Star Music Awards, becoming the organization’s inaugural Hall of Fame inductee. In bestowing the honor to Keen, the owner of Lone Star Music said that Robert Earl was vital to the formation of Texas music’s own radio charts. That’s right, Texas music has its own radio charts. It also has its own radio stations and radio shows, and its own television programs like Ray Benson’s Texas Music Scene and others. It has its own hard print magazines, publications, and websites.

Of course the Lone Star Music Awards pale in the scope of mainstream country’s CMA’s or ACM’s. The Texas radio and TV infrastructure cannot compare to the CMA and CMT.  And despite the recent success of headliner Texas artists like Jack Ingram, they’re still nowhere the draw of Music Row’s biggest acts. But what Texas/Red Dirt has that Music Row/Nashville doesn’t is a true sense of community and a handle on artistic quality that Texas/Red Dirt artists and fans would never swap for more exposure to the teeming masses.

Cody Canada of the Departed might be Red Dirt’s biggest star, and just looking a the guy with his outward rock star persona, you might mistake him for a man that could sell out stadiums. And if Cody had left Cross Canadian Ragweed years ago for a record deal on Music Row, he very well might have made it to that stature. The man just drips cool. But after the Lone Star Music Awards, Cody Canada didn’t retire to the back of his limousine or tour bus, he walked down the street with the rest of the average joe’s and was mingling with fans in a laid-back setting at a free admission afterparty at the Cheatham Street Warehouse in San Marcos. An up-and-coming Texas country band called The Hill Country Gentlemen were playing, and giving their CD’s away for free.

For artists and fans intimately involved in the Texas/Red Dirt movement, none of this is news. This is the reality they’ve been enjoying for many years now. What’s interesting about what is happening in the Texoma entertainment corridor is how little its sustainability and growth is being recognized by Nashville and the rest of the outside world. The scope and the depth of organization that Texas/Red Dirt boasts is nothing short of astounding when it is studied from the outside looking in.

Texas music is becoming hard wired and institutionalized, and this creates a few game-changing, long-term effects on the overall country music landscape. With it’s own infrastructure, the chances that the Texas music scene and the revenue it generates will ever re-integrate with mainstream country dwindles with each passing day. Though mainstream country is still very much alive in Texas and Oklahoma, and even overlaps when it comes to certain Texas/Red Dirt artists, the independent scene is able to thrive thanks to the entrepreneurial spirit of some to create enterprise around the music, the undying loyalty of fans, and the willingness of the artists to not abandon the roots that led to their success.

But maybe most importantly, Texas/Red Dirt is also offering a template to the rest of the music world, and not just country music, of how to regionalize and organize a group of like-minded musicians and fans together to where they’re not dependent on corporate America’s traditional musical industrial complex for sustainability; where you can have artistic integrity and an independent spirit, and not sacrifice financial success. Even other music scenes that exist in Texas right now–some that may not want to associate with Red Dirt because the ease with which it mingles country and rock–could learn how to get organized by the Red Dirt/Texas Country’s road map.

It is not all rosy in Texas/Red Dirt. Though the scene offers tremendous support to its artists, it also acts as a ceiling. It has been hard for some of the biggest regional names to graduate to national recognition once they get pegged as a Red Dirt act. And despite being so big and boasting impressive infrastructure, Texas/Red Dirt finds itself mired with the same trappings that some small music “scenes” do. Political drama, and a culture that sometimes doesn’t want to be critical of artists can result in mediocre music. As the movement has grown, quality control has become an issue, with some acts appearing to be “selling out” for commercial viability no different than mainstream Music Row acts.

But in Texas/Red Dirt, they’ve graduated from simply complaining that Nashville sucks to doing something real, something substantive about it, and something that has proven to be sustainable now over a period of years. JUst like many other “buy local” movements, fans are now considering where the dollars they spend end up. Is this a big threat to Nashville? The biggest threat may be if other regional, like-minded music movements pattern themselves around the Texas model, and begin to institutionalize as well. Either way, independent-minded artists, fans, and scenes should be paying more attention to what is happening down in Texas. And so should Nashville.