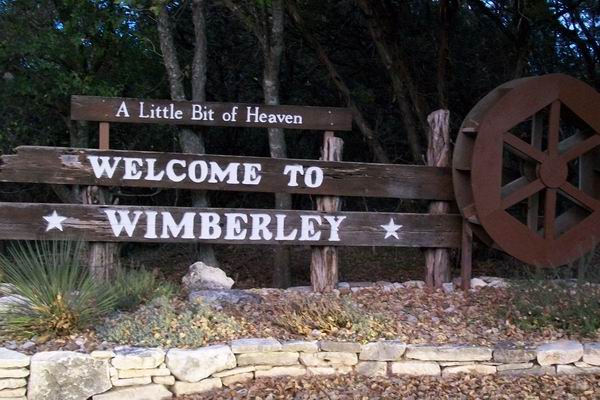 Many of your favorite Austin, TX musicians who list their hometown as Austin actually live in a small community south and west of the city in the panoramic Texas Hill Country called Wimberley. About a 45-minute drive from Austin, the small town of less than 3,000 sits on the banks of the Blanco River, and is a favorite day trip for many central Texas residents.

The picturesque town and its surroundings have been the inspiration for many country songs since the greater Austin area became a haven for musicians in the 60’s, and Wimberley has boasted a strong artist community for many years. Ray Wylie Hubbard calls Wimberley home, and Hal Ketchum used to live in a cabin in the community. Bluegrass prodigy Sarah Jarosz is originally from Wimberley, and so are many other songwriters and musicians who have lent their creative efforts to country and roots music over the years. The Wimberley United Methodist Church regularly hosts “Susanna’s Kitchen” concerts where local artists like Ray Wylie Hubbard play.

On Saturday night (5-23), the Blanco River that runs through Wimberley overran its banks to historic levels amidst the devastating storms Texas has been experiencing. The heart of Wimberley was ravaged, and an estimated 350 homes were destroyed when the river reached a historic level of 43 feet. The previous record flood for the Blanco was set in 1929, and was eight feet lower than where the river crested Memorial Day weekend. Flood stage on the Blanco River is 13 feet. According to the National Weather Service, the river was flowing at a rate of 223,000 cubic feet per second, which is 2.5 times the flow of Niagra Falls. The water was so intense, it swept away an entire bridge (see video below).Eight people are currently missing in the Wimberley flood from two separate families. Laura McComb and her two children Leighton and Andrew, Ralph and Sue Carey, Randy and Michelle Charba (daughter of Ralph and Sue), and their 4-year-old son Will have all been confirmed missing by authorities.

“I’m overcome with sorrow as my little Texas town lie(s) in ruins,” songwriter and performer Robyn Ludwick posted Monday morning (5-25) along with pictures of much of the devastation around Wimberley. Robyn is the sister of famous Texas singing brothers Bruce and Charlie Robison. “Wimberley, Texas, one of the most beautiful spots in the world has endured incomprehensible damage from flooding. My neighborhood is in the National news. Just 500 yards away, my neighbors are missing and still haven’t been found. This morning I walked a mile to get one bar on my cellphone to let every one know that we are safe. But we are not okay. What has kept me with strength is the messages of concern and love from my family, friends, fans, and unbelievable perfect strangers.”

Ludwick posted pictures and video of trees ripped out of the ground by flood waters, structures swept off their foundations, and cars overturned in trees.

“As I type, search and rescue helicopters circle. My little girl says ‘please let this be a bad nightmare mommy.’ Please pray for our little town, a gem along the Blanco River. We need every possible prayer. Rain drops fall and the sky darkens again. No way to get news or weather. Hopefully we can get thru the next round and start repairing our hearts and this little town.”

Information has been difficult to get out of Wimberley since access to the town is difficult, and communication channels are down. Ray Wylie Hubbard’s home, which is close to the center of Wimberley, was spared from the worst because it sits on a hill. “Thanks to all who have reached out to check on Ray Wylie & I,” Ray’s wife Judy Hubbard posted on Twitter. “We’re on a hill so no water in our house but lots of devastation in Wimberley.” Musicians Andrew Hardin and Susan Gibson were also spared the worst of the flood, though they lost power like most of the community during the devastating storm, and have friends and neighbors who’ve been heavily affected.

Another artist wasn’t so lucky. Bob Stafford, known to some as “Texaco,” who Wayne “The Train” Hancock can be heard calling out to on many of his early albums, had his Wimberley recording studio inundated with two feet of water in the disaster according to reports. Stafford was able to save his guitars, but amps, PA’s, and computers were damaged in the flood.

The flooding was also felt upstream in Boerne, TX where songwriter and performer Possessed by Paul James lives. He was forced to evacuate his family to higher ground, though Borene was spared the brunt of the flood. Downstream in San Marcos where many Texas/Red Dirt artists live, more homes have been destroyed or flooded, and more people are missing. And the threat of floods in Central Texas is not over. With highly saturated soil from weeks of historic rains, and more storms already flaring up on Monday including with multiple tornadoes, more flooding could occur.

UPDATE 3:20 PM CDT: Sarah Jarosz has posted, “Thanks to all who have reached out with concern in regards to the recent flooding in my hometown of Wimberley, Texas. My family is ok, but this is a very difficult time for the Wimberley community. Please keep all those who have lost their homes and loved ones in your thoughts and prayers.”

Wimberley has two organizations already set up and would prefer donations be sent to Barnabas, PO Box 737 Wimberley, Tx 78676 OR
My Neighbors Keeper, PO Box 528 Wimberley, Tx. 78676. Both are established 501c3 non-profit organizations and will ensure funds go directly to Wimberley area families.