Whatever your country music question is, Marty Stuart is the answer.

Are you looking for more twang? Look to Marty Stuart. Do you want music that respects the roots? You want Marty Stuart. Are you searching for that one artist that can appeal to the young, to the old, to the hardcore country fans, to fans of country from the outside looking in, and whose appeal spans from gospel fans to punk kids? Then Marty Stuart is your man.

Marty Stuart is on an amazing roll ladies and gentlemen. What he’s doing right now with lead guitar player “Cousin” Kenny Vaughan and The Fabulous Superlatives is stuff that legends are made of. You know those periods in an artists’ career that you look back on like they can’t do wrong, churning out amazing songs and albums one after another? Hank Jr. from Whiskey Bent & Hell Bound to The Pressure Is On, Willie & Waylon after they’d shaken loose from the grips of RCA in the mid 70’s. That’s the kind of epic and influential period were in the midst of right now with Marty Stuart, and what a blessing it is to realize this and to be able to experience it all in the present instead of trying to relive it through the past. 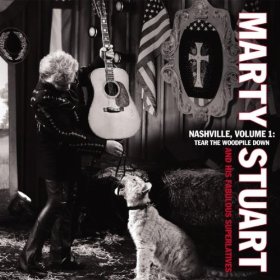 Everything is firing on all cylinders, from Marty’s live show, to The Marty Stuart Show on RFD-TV, to his last album The Ghost Train, to now Nashville Vol. 1 – Tear The Woodpile Down. Say what you want about the Marty Stuart of the past, and who knows what the future will hold, but right now, as simply as it can be said, Marty Stuart is single handedly saving country music.

And this is no accident. Oh no. Marty knows exactly what he’s doing, and he knows exactly why it needs to be done. At some point he identified the need and then decided to roll up his sleeves, reach down deep into the roots of the music, and resurrect them with such fervor that nobody could ever accuse the music of being boring or outmoded or in need of progress.

First and foremost this is guitar music. Over-twangy, too-loud, sexy, dirty, evil, beautiful, in-your-face, unapologetic guitar music punching and kicking its way into you by-God American country soul until sitting down or standing still is no option. The dueling Telecaster work between Marty and Kenny Vaughan is something so tasteful and technically superior, it transcends the entire country genre to elevate these two men and the groove they evoke into the guitar god stratus.

Songs like “Tear The Woodpile Down”, the instrumental “Hollywood Boogie”, and the mandolin-driven “Truck Drivers’ Blues” (which you have to listen closely for the Mick Jagger-like “Uh!” in the intro) have the stones enough to make country converts out of rock fans. Marty’s gospel fan club may not want to hear it characterized like this, but there’s sex embedded in this music from its swagger. Its got balls, and don’t be thrown off by the silver hair, Marty brings a young, enthusiastic approach, winding you up in the intros, and then letting you go like a spinning top in a swirl of dizzying, Jerry Reed-style close guitar harmonies and hot lick tradeoffs. 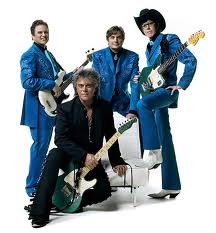 But all this is just noise without the gift of good songwriting. Even the slow songs bring such passion, conveyed in the studio in no less measure than they would be live. That is what you get in songs like the subtle, but stabbing indictment of Music City “Sundown in Nashville” written by Dwayne Warwick, and sad songs like the Stuart-penned run that takes you toward the end of the album from “Going, Going, Gone” to “A Song of Sadness”. I can’t help but hear a little of the Dwight Yoakam, West Coast approach in these songs, and in the tear-jerking, swinging waltz “A Matter of Time”, the usually-composed and perfect Marty Stuart let’s his voice crack with emotion in one of the most stirring vocal performances I’ve heard from the man. With every one of The Fabulous Superlatives boasting superlative abilities at composing and performing harmonies, the only way to characterize the caliber of vocal performances on this album is “unfair.”

Something else remarkable about Nashville Vol. 1 is how similar it is to his previous The Ghost Train. Traditionally this is an unwise decision, but when you’re in such a groove and hitting on all cylinders, why shake it up? At some point the need for change will present itself, but for right now ride that groove until it’s worn out. What Marty has found with The Fabulous Superlatives is too good not to. 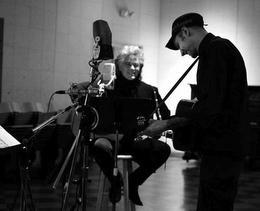 One of the great things about Marty Stuart is that he can be all things to all people. The gospel crowd can’t help but love him. Mainstream and young fans can’t help but pick up on the guitar work if they’re exposed to it. And even the punk and heavy metal country converts can find what they’re looking for here. Marty helps point them the way by including Hank Williams III on the final track, “Pictures From Life’s Other Side” written by Hank Sr. A perfect gospel tune sung with such heart and grace by both men, it chills your bones with the stark, ancient country language portraying a haunting, unveiled moral. Even without the loud Tele or the original songwriting that defines most of this album, this might be one of the album’s best tracks.

But let me waste no more time slaving away with mortal words trying to describe this music, just go listen. Get this album, listen to it loud and frequently, and save your country soul.

Thank God for Marty Stuart! (Please, somebody put that on a T-shirt. I’d buy two.)

Preview & Purchase Tracks of Nashville, Vol. 1 – Tear The Woodpile Down

You can also listen to four complete songs, including the duet with Hank3 on Soundcloud.