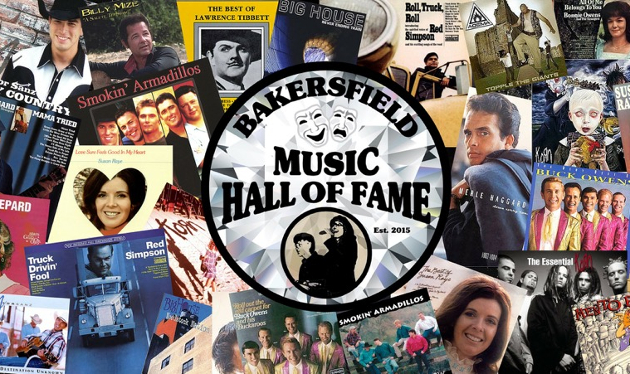 The Bakersfield Music Hall of Fame in cultural-rich Bakersfield, California has announced their inaugural class of inductees to be enshrined in the Hall of Fame in correlation with the one year anniversary of opening its doors to the multi-use facility. Not your average Hall of Fame, it includes two professional recording studios, and a 250-seat performance hall among other facilities in the 100 year-old building located at 2230 Q Street in Bakersfield.

The inaugural class of inductees are Bakersfield legends Merle Haggard, Buck Owens, Red Simpson, singer and steel guitar player Billy Mize, and Bonnie Owens. According to the Hall of Fame, a total of 17 individuals will eventually be recognized in the inaugural class, with the rest of the inductees to be named later. Each inductee will be honored with a life-sized commemorative vinyl portrait along with a summary of their musical achievements to be hung on the wall of the hall of fame, as well as a star to be placed in the concrete walkway of the building.

The induction ceremony will occur on Friday, January 27th, with two additional shows later in 2017 also commemorating the inductees.

Bakersfield Music Hall of Fame founders Kimberly McAbee-Carter and Kyle Carter purchased the property at 2230 Q Street and started the Hall of Fame to revive Bakersfield’s great musical heritage to its former grandeur and help the next generation of local artists propel forward to achieve greater accomplishments in the future. The facility is not a museum, though they may have displays from time to time. Instead the purpose is to support local artists through the facility to continue the legacy of Bakersfield music and performing arts.

The inductees to the Hall of Fame are nominated by a six-person advisory board that elects potential nominees, and then votes on those nominees for induction.