“The Ballad of Shovels & Rope” Chronicles the Band’s Unlikely Rise 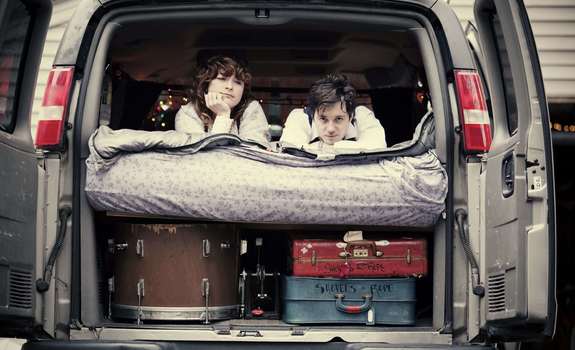 Fortuitous would be one way to describe this project. Moving would be another.

Rewind back to 2010, when singer and songwriter Cary Ann Hearst was still working as a waitress part time to pay the bills in between music gigs, including with husband and solo artist Michael Trent in a duo known as Shovels & Rope. Two years before in December of 2008, the tandem had already released an album called Shovels & Rope, and in 2009 the two solo performers got married, but Shovels & Rope was never meant to be a permanent thing. It was more of a collaboration between their two respective solo shows.

It was in 2010, around the time Cary Ann Hearst reached out to filmmakers Jace Freeman and Sean Clark to make a couple of videos for her individual music that serious plans were being laid to make Shovels & Rope the preferred project of both Hearst and Michael Trent. Jace Freeman and Sean Clark, known collectively as the Moving Picture Boys, saw an opportunity to chronicle the formation of the band by following the duo around for a few months with no real plan of how to feature the content once it was captured, but with a sense something interesting might come of it. Four years later, Freeman and Clark were still filming, and Shovels & Rope was becoming the biggest new band in Americana, winning top industry awards, playing Letterman and Austin City Limits, and generally exploding on the national scene.

Shovels & Rope and the filmmakers put the cart before the horse, but in this instance it paid off in a brilliant and inspiring film. The Moving Picture Boys didn’t have the daunting task that most documentary makers face in attempting to tell a compelling story about an unknown or mundane subject, or having to embellish the important moments to keep viewers entertained. The story was telling itself in a way no script could ever facilitate. They just had to make sure they did justice to the story unfolding before them. Then when a Kickstarter was launched to fund the final production of the film, the fierce Shovels & Rope fans doubled the pledge drive’s initial goal of $20K, pulling out any and all stops to making The Ballad of Shovels & Rope one of the best music documentary films of 2014. 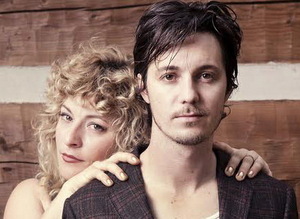 The beginning of the film starts off a little bit awkward as you can tell Cary Ann and Michael are adjusting to having cameras in their creative and home space, and some of the moments come off a little more choreographed than spontaneous. But eventually everyone settles in and soon you’re witnessing the reality of this band in its formative and humble incarnation when crucial decisions are being made that will enable their eventual success. Their struggles, their second guesses and vulnerabilities are on display as they play frustrating shows and take a chance on going to LA to record an album in two days, and ultimately scrapping everything they cut. Though you go into this film knowing there’s a happy ending that is beyond all odds in a cutthroat business known for crushing 1,000 dreams for every one it fulfills, the documentary shows that even amidst their success, there was a litany of preliminary failures.

But perseverance, and the self-awareness of knowing when something is right, and when something is not is what powered this husband/wife duo through adversity, and landed them on the stage of the Ryman Auditorium, walking away with the Americana Song of the Year award for a composition the cameras are there to capture Cary Ann Hearst carving out of inspiration four years before in the very early stages of the film. You literally see a career-defining song go from scribbles in a notebook to being played at the Country Music Mother Church and being awarded the greatest distinction any song in the Americana realm can receive.

In between The Ballad of Shovels & Rope captures the band deciding to record their premiere album O Be Joyful DIY style in their own house as Cary Ann is still waiting tables and haunting laundromats in the throes of poor musicianhood. It shows them soliciting the services of Amanda Shires to record fiddle parts in the duo’s tour van as Shires’ future husband Jason Isbell sits in the background with a fedora and a mixed beverage in his pre-sober condition. The cameras are there when the duo is approached by the Dualtone label, and when they’re consternating and eventually make the fateful decision with their manager to sign the record deal, putting them on a path to roots music success. And there’s more intimate moments throughout the film, like the duo bedding with their dog Townes in Wal-Mart parking lots, and hanging out at Cary Ann’s parent’s house.

No matter how emotionally invested you may or may not be in Shovels & Rope’s music when you begin this 70-minute feature, both the rarity of being able to watch a quirky, cool, and creative band make it in the music business, and to have cameras there capturing all of the most important moments, makes The Ballad of Shovels & Rope something universally appealing beyond the musical quotient. The perseverance of hope is really what is chronicled in this film, along with a lot of wisdom to understand for a rag tag band to make it in 2014, it takes a tremendous amount of work, a few lucky opportunities, and not just the ability to make the right decisions, but the insight to not allow oneself to make the bad ones.

Just like the band itself, The Ballad of Shovels & Rope is an achievement beyond all odds that results in art that uplifts as it entertains.

Purchase The Ballad of Shovels & Rope