The Brotherhood Between Hank3 and Marty Stuart 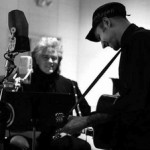 They say it’s a shame you can’t pick your family like you can pick your friends, but who would have ever picked the hellraising Hank Williams III and the holy cross-clad Marty Stuart to be buddies. But that’s exactly what they have been for years now, and the relationship has resulted in in some great music for the fans of both men.

“I love him, he’s like my brother. Shelton is like family to me. I support him in everything he’s doing,” Marty told The Boot when talking to them about his just-released album Nashville Vol. 1 – Tear The Woodpile Down.

The last track of the album is a Hank Williams Sr. gospel song originally recorded under the pseudonym “Luke The Drifter.” Hank3 and Marty first performed it as a duet on RFD-TV’s “Marty Stuart Show.” As Marty explained to The Nashville Scene, getting Hank3 to perform one of his grandfather’s songs is sort of a feat. The youngest Hank has staked his career on trying to stay out of the shadows of his famous father and grandfather. It might have been a suit from Hank Sr. that Stuart had as part of his vast country music archive he keeps in a warehouse in Nashville that helped seal the deal. 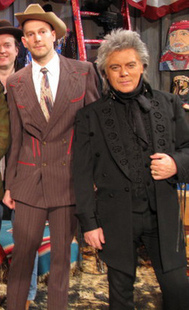 “I knew that that side of him is one that has been, you know, pressed upon him: ‘You go down grandpa alley.’ And I didn’t want to be one of the guilty ones for that. But I simply asked him if he would even consider coming to do a Hank song on [The Marty Stuart Show]. He was in the mood to do it. So he came out to the warehouse to rehearse with me, and I showed him one of his grandpa’s old suits. … He just peeled off in the middle of the office and put it on, and it fit! He showed up on that TV show and came around the corner, and everybody just lost their breath.”

When it came time to record Stuart’s new album, Marty liked the collaboration so much he asked Hank3 to do it again in the studio. But this wasn’t the first time the two men collaborated on a recording. Hank3’s 2008 album Damn Right, Rebel Proud included Marty Stuart on mandolin and some lead guitar, proving that Hank3 is not the only one of the two men willing to work outside of their comfort zone.

“They can bring Assjack next time,” Marty Stuart laughs.