The Cadillac Three Poised for a Big 2014 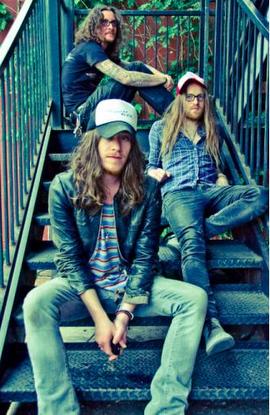 As we head into 2014, country music is primed to have a tumultuous year filled with historic change and big events. We’re looking at a year that has started with the continued dominance of hip hop-inspired laundry list country songs from male performers on the mainstream dial, but countered by a historic backlash from artists, radio programmers, and even Big Machine Label Group’s President Scott Borchetta who recently said, “We can’t keep talking about Fireball and Coors Light and having the tailgate down, etc. So we’ll task our writers and artists to dig a little deeper.”

Poised to be Big Machine’s 2014 big breakout act is a band called The Cadillac Three—a rough-edged, hard-rocking trio that if not touring honky tonks has been tearing it up in opening slots on big tours for artists like Dierks Bentley and Eric Church, while contributing songs to some of country music’s biggest names including the recent single from Jake Owen, “Days of Gold,” Tim McGraw’s “Southern Girl,” and Keith Urban’s “You Gonna Fly.”

Hard to pigeonhole, and certainly not what one would traditionally consider mainstream country music, The Cadillac Three’s following is fairly small at the moment, but their ability to appeal to mainstream fans, Southern rock fans, and even some independent and underground fans with a sound that despite whatever lack of depth is hard to not label as authentic and gritty, The Cadillac Three could be a band who finds themselves at the nexus of being able to take advantage of the “bro-country” phenomenon, and its backlash.

The Many Names of The Cadillac Three

The Cadillac Three started out as The Cadillac Black, but really the heart of the band goes back to a group called American Bang, and even a group before that called Llama. Lead vocalist, guitarist, and songwriter Jaren Johnston, slide player Kelby Ray, and drummer Neil Mason all grew up together in the Nashville area and have been playing music together since high school.

Name changes have been the name of the game for the band that would eventually be called The Cadillac Three. Llama, originally known as the Dahlia Llamas, was a band consisting of Cadillac Three drummer Neil Mason, a lead guitar player named Ben Brown, and 3 others. It was a high school band, but one that was signed to MCA Records and released an album in 2001 called Close To The Silence. Llama broke up in 2003, and a band called Bang Bang Bang was formed with Neil Mason, Ben Brown, and current Cadillac Three members Jaren Johnston and Kelby Ray. Bang Bang Bang also signed with Warner Brothers Records in 2006, and changed their name to American Bang when they found out another band was using the Bang Bang Bang name already.

After guitarist Ben Brown left, American Bang reformed into The Cadillac Black. When the band signed with Big Machine Records in February of 2013, once again the name was found to be too similar to other existing bands, and too hard to disambiguate with bands like The Black Cadillacs, and The Cadillac Black became The Cadillac Three.

Though the sound, the style, the image and presentation of The Cadillac Three seems to be a very stripped-down, ugly, underground affair, the band and it’s numerous predecessors have mostly existed within the industry and been signed to major labels. It’s interesting to note that when The Cadillac Three signed with Scott Borchetta and Big Machine, they were not slated for one of the label’s side imprints—Valory Music Group or Universal Republic—which some artists are delegated to so they can develop into larger names. From the start, The Cadillac Three are running with the big boys on Big Machine proper.

The band has been the perfect opener for artists like Eric Church and Dierks Bentley because they are a rocket-fueled, full-tilt act that can rev up an arena crowd, yet they offer a fairly narrow range of textures so they won’t upstage their headliner. Boiled down, The Cadillac Three’s lyrics are very typical laundry list fare, relying heavily on Southern artifacts spoken on with great reverence in a revolving fashion and delivered with Tommy Gun rapidity. It’s not that the band doesn’t have songs that shift gears, but The Cadillac Black may be a case where a band is simply doing what they’ve always done, and it’s the relevancy arch that inadvertently coincides with their sound instead of a band attempting to chase the current, relevant trend.

Like when Blake Shelton recorded Rhett Akins’ song “Kiss My Country Ass,” it’s not necessarily Rhett Akins’ fault that a song he wrote many years before became a trendy hit. The Cadillac Three aren’t trying to ape Florida Georgia Line and Luke Bryan; it’s more like vice versa. But being the less-recognized name may make it appear otherwise.

What listeners will not be able to lose sight of is that The Cadillac Three are far from the polished pretty boys currently pervading the top of the pop country ranks. Jaren Johnston’s patchy beard, Kelby Ray’s unruly hair, and three greasy baseball caps with the bill’s pointed in the right direction is not what mainstream country fans are used to looking at. Even their lineup is a little weird, with Kelby Ray handling the bass parts and guitar duty simultaneously through a steel guitar rig. 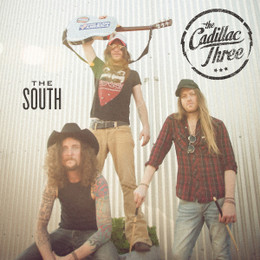 At the same time, many independent and underground country fans who see this band on paper and think it may be their kind of medicine will immediately be repulsed by their formulaic checklist tunes. Case in point is their first Big Machine single “The South” that features appearances by Florida Georgia Line, Dierks Bentley, and Mike Eli of the Eli Young Band. Yes, “The South” is The Cadillac Three’s coronation into the mainstream if there ever was one.

It all adds up to 2014 potentially being a huge year for The Cadillac Three, for better or worse.