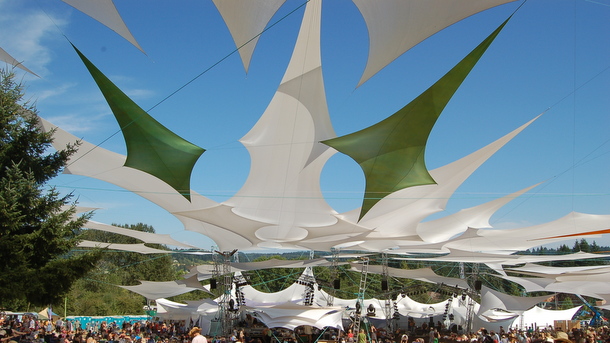 There are a lot of things I could praise Pickathon for, like the fact they can throw a festival for over 3,000 folks and generate virtually no trash, that they can broadcast all of their stages online in super-high quality, and for free, and implement all manner of other forward-thinking ideas into the music festival format while thinking out all the little dilemmas and ensnaring tentacles that may arise when trying new things.

But the thing I am most thankful for when it comes to Pickathon is that in this age of music and cultural mypoia, where technology and media that intuitively should give us access and awareness to so much more seem to instead be fueling the narrowing of the music reality tunnel, Pickathon works to erode music myopia by filtering off the cream of many different scenes and styles of music and offering them all for your listening enjoyment in one place, and at the same time offering that music in multiple formats and settings to be enjoyed.

Almost like a Choose Your Own Adventure novel, with so many different stages and performers playing multiple times over the weekend, everyone’s Pickathon experience is going to be unique, and it is going to be filled by both enjoying the familiar, and discovering the unknown. 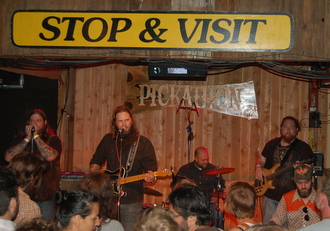 My Pickathon 2012 experience started with the familiar in the form of Whitey Morgan & The 78’s. Whitey played Pickathon in 2011 as well, but only had one remaining member from last year’s lineup; pedal steel player Brett Robinson. New bass player Joey Spina and harp/harmony vocalist Danny Coburn looked like they belong in Whitey’s band more than Whitey, with their long hair, huge build and beards, and black vests, while Whitey appeared to have lost half a hundred pounds since last August. With new drummer Tony DiCello, you may consider this the “hot” version of The 78’s with generally faster-paced songs.

This 78’s lineup may be new, but they were tight. Danny Coburn has been singing harmonies with Whitey since they were 15, and you got these sense you weren’t just watching a tight band, but a tight group of friends. Numerous times during both of Whitey’s Friday sets he capped off barely-veiled shots at old lineups and old players. “My band’s totally different from last year, and twice as better. It’s the best band I’ve ever had, dot dot dot!”

They featured a new cover of Thin Lizzy’s “Cowboy Song”, and a new version of their old song, “I Ain’t Drunk”:

Between Whitey’s sets on the main stage and the Galaxy Barn, I caught Cajun Country Revival consisting of Caleb Klauder, members of the Foghorn Stringband, and real deal Cajun musicians Jesse Lege and Joel Savoy. They stimulated the biggest crowd of dancers in the Galaxy Barn all weekend.

Integrating Cajun and country, French and English, weaving in and out of the different styles sometimes in the same song awakens that deep-rooted roots appeal embedded in all of our souls and sets the body in motion. Whether it was when Joel Savoy and Foghorn’s Stephen Lind got sawing together on the fiddles, or when elder Cajun music legend Jesse Lege took the lead on accordion or belted out a chorus in authentic Cajun French, or Caleb Klauder then parroted the line in English in his sublime country voice, the Cajun Country Revival created shivers.

And no matter where you put Caleb Klauder, the quality of the music project rises, and its sometimes hard to not focus on him alone. With his own band, with Foghorn, or sitting in with someone like Justin Townes Earle like happened at Pickathon three years ago, Caleb Klauder is quality, and a very familiar face around the Pickathon grounds. After the Cajun Country Revival set, I felt the need to take to Twitter and unilaterally declare him the “Mayor of Pickathon.”

Here they are performing Buck Owens’ “I Don’t Care (Just As Long As You Love Me)”:

At the end of the year whenever I look back on all the live performances I’ve seen, Pickathon usually facilitates one of the top musical experiences, and that was the case when Thee Oh Sees took the Galaxy Barn stage late Friday night. It is physically impossible to put out more energy then they did in their wild set of psychedelic surf guitar rock. Hard, driving, and fast, but still ethereal and dreamy, it was one of those fully-encompassing music experiences where you’re completely taken in by the music and nothing else matters. They mix the mod/retro feel of the B-52’s, the style of Dick Dale, the energy of West Coast punk, and the boy/girl high harmonies indicative of fellow San Francisco-based Jefferson Airplane. No words would do them justice so just watch the video below (and here’s another from Pitchfork). If you like music, you need Thee Oh Sees in your life.

Saturday started by checking out Andy Bean and the Two Man Gentlemen Band, drenched in their period garb and offering the neo-traditional fare for the weekend. Call them a bit if you want, but they had the crowd up on their feet with their up-tempo, catchy tunes bolstered by humorous lyrics and tight harmonies. Then after a second round of Thee Oh Sees on the main stage, it was time for clawhammer banjo player Abagail Washburn accompanied by Kai Welch. Progressing way beyond her primitive instrument, Abigail offered a diverse set that went from gospel, to ambient keyboard loops and ethereal vocals accompanied by Kai’s trumpet, to traditional Chinese music complete with appropriate hand gestures. And then she finished up with what else, but dancing a jig while leading the crowd in a gospel sing-along.

This year’s Pickathon had a very distinct Cajun/New Orleans flavor, from the previously-mentioned Cajun Country Revival, to the big and boisterous Hot 8 Brass Band–a New Orleans street marching street act–to the Lost Bayou Ramblers, which featured Gordon Gano from The Violent Femmes on fiddle, both of which delivered blazing sets on Saturday night to big crowds.

Other Saturday highlights were Reverend KM Williams keeping the blues alive at Pickathon, and Ohio’s Southeast Engine who offered a breather from all the bits and showed that straightforward rock songs and substantive songwriting will always have their place and appeal in music.

Last year when Pickathon released their lineup and Langhorn Slim was not on it, fans raised such a clamor, there was no keeping him off this year. It certainly wasn’t from lack of talent that Langhorn Slim was left off, only that he has performed the fest so many times in recent memory. If Caleb

Klauder is the Mayor of Pickathon, Langhorn Slim is the King. His use of dynamics is the most enchanting thing this side of Phish, and the energy is virtually unmatched. But what you can’t overlook is Langhorn’s lyricism, and for how entertaining his fast, dynamic numbers were, his slow songs may be the most memorable.

Saturday night was also when pseudo-headliner Neko Case (Pickathon is famous for not having traditional headliners) had her first set on the Woods Stage, which as the name implies, is set way back in the woods in a primitive setting. I’ll say first that this was not Neko’s primary slot. She would play Sunday night as well on the main stage and from all accounts (I had to leave before her set), it was excellent. But this first one Saturday night was the most off and uninspired set of music I witnessed all weekend, or at any Pickathon, and coming from someone dubbed as one of the biggest name at the fest, this was disappointing. 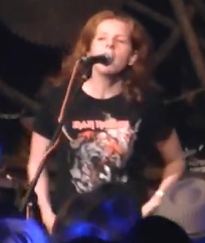 Her set was supposed to begin at 9 PM, and didn’t start until after 10. I’m not sure if this was completely her fault. I know the stage had been running about 45 minutes late earlier in the day, but the crowd had been standing there for more than an hour in the darkness, with no other music that bled over into her slot. The lone beer stand back in the Woods ran out of booze. Dust had been a big issue over the weekend, especially at the Woods Stage, and people sat or stood breathing it in to in the end watch a mild set of music.

When Neko finally came out on stage sporting an Iron Maiden t-shirt and stroking the hair back out of her face every few minutes, she looked bothered and unfocused. She flubbed numerous songs, having to start one over, and messing up another one by forgetting her guitar player was not there, which also aided to the hollow and uninspired sound. A big chunk of the set was filled with only partially-humorous, and many times confusing and incongruent stage banter about leaking nipples and Hobart mixers. When Neko was singing and focused, the music was excellent, but after 3/4’s of the set and a nose full of black buggers, I raised a white flag and headed for the Dr. Dog show on the main stage.

Dr. Dog never does not deliver. You can ask the question why they and other bands like The War on Drugs are performing at a festival that is basically roots-based (and they ask that very question themselves from the Pickathon stage two years ago, the first time they played the fest) but the magic and appeal of their music is undeniable.

After seeing Lake Street Dive perform at Pickathon’s “Pumphouse”, a small shack isolated in the woods where bands go in and make top notch videos for the site Live & Breathing, I made a vow to catch their set on Sunday at Pickathon’s Workshop Barn, where bands not only perform, but get a chance to tell stories about their songs, and sometimes engage in question and answer sessions with the crowd. Right up there with Thee Oh Sees, Lake Street Dive from Brooklyn was one of the new take-aways for me from 2012 Pickathon. Though maybe a little more polished and jazzy for traditional Saving Country Music fare, their style and musicianship was enthralling and made me a fast fan. After their last Workshop Barn song, they got the biggest ovation I think I have ever seen for a live performance, possibly ever. I was afraid the floor was going to cave in.

Shovels & Rope was also a top priority for Sunday, and Cary Ann Hearst and Michael Trent delivered. On a weekend that showcased some of the greatest pickers and players out there today, Shovels & Rope showed that passion and heart are still the most important parts in connecting with music. They’re like the underdogs you love to root for, though they may not be underdogs for long. Pickathon has a way of finding talent and showcasing it right before its meteoric (and sometimes too expensive to book in the future) rise, and Shovels & Rope might have been that band this year.

Unfortunately, even with Pickathon offering two performances from artists, there were still folks I wanted to see and missed, like Doug Paisley and Blitzen Trapper, and Todd Snider who played both sets before I arrived on Friday. But still the amount of music I saw was enough to satiate the music brain for months, and the new bands I discovered gave me plenty of homework.

Once again Pickathon put on an excellent festival that I can comfortably call the most well-operated, most forward-thinking, and most hospitable festivals you can find, music or otherwise. This year dust was an issue for some folks, but that is a solvable problem, and though Pickathon seems to be teetering right at the edge of overcapacity, some smart thinking in the routing of people, and making small changes like an overflow area for the Workshop Barn and moving the beer stand away from the Galaxy Barn to relieve congestion helped stave off those concerns for now.

A big hand goes out to Terry, Zale, all the Pickathon performers, organizers, workers, and volunteers for another excellent an inspiring music experience! 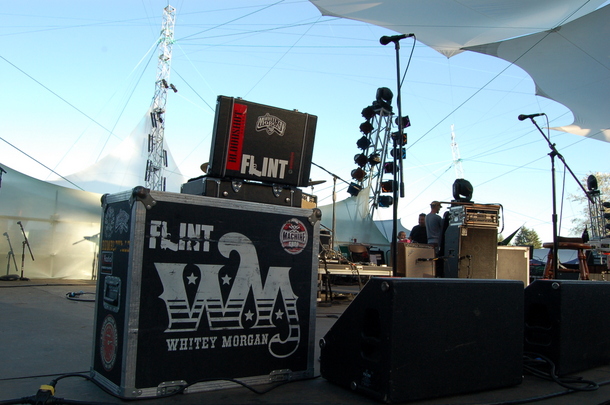