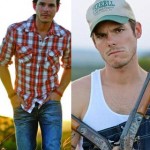 A little under a year ago, Earl Dibbles Jr., the alter ego of Texas country music star Granger Smith, released a song and video called “The Country Boy Song” that had us all in stitches. The way it seemed to parody the current trend of country music laundry list songs and their idiotic obsession with beer, pickup trucks, mud, and chewing tobacco was beyond poignant, and was punctuated by the hilarious video. In the Saving Country Music review I praised how the song and video exposed “the moronic, stereotypical, rehashed, and creatively-vacant world of corporate country’s checklist culture.” Earl Dibbles Jr., and his real life counterpart Granger Smith came across like heroes for true country music.

Then in mid-October of 2012, Granger Smith released the single “We Do It In A Field” from his new album just released today called Dirt Road Driveway, and all of a sudden we had to re-write what we thought about Granger Smith. Here he was seemingly perpetuating the same laundry list filth we thought his counterpart Earl Dibbles Jr. was lampooning.

“We bump down dirt roads in jacked-up trucks…We do it in a field, rock it all night ’till the sun comes up. We got 100 blue cans sitting on ice in the back of my truck. And George Strait blaring in a Chevrolet…”

Yes, that’s three references to trucks before the end of the first chorus.

Though without a doubt Earl Dibbles Jr. is meant to be parody, maybe it was not meant to convey the irony about the state of mainstream country some of us wanted it to.

Today to mark the release of his album Dirt Road Driveway, Granger Smith posing as Earl Dibbles Jr. has released another equally-hilarious video and song to “The Country Boy Song” called “Country Boy Love.” This thing has more pelvic thrusts than a troupe of Paula Abdul backup dancers, and more cleavage than a rock quarry, with buxom girls dry humping farm machinery and other scenes of sexual ribald. Eat your heart out Dustin Lynch and Luke Bryan. But I can’t help but think that if Earl Dibbles isn’t demeaning pop country, then is he demeaning someone else? Or maybe if you try to read anything into the Earl Dibbles Jr. character, then the joke’s on you.