The Deslondes: A New Way of Making Old Music

Boy did I ever think I had stumbled upon an undiscovered gem when I inadvertently found myself listening to a live set of The Deslondes at South by Southwest a couple of years ago. That’s sort of what you hope for from your SXSW experience: finding something nobody else has heard yet that’s bound to set people’s hair on fire. I had my head down and was headed somewhere else when I heard them banging away in the parking lot of a St. Vincent de Paul thrift store, playing an unpretentious and earnest set of throwback roots music mixing a concoction of influences the likes I’d never heard thrown together before.

As they continued playing, I rubbed my hands together like a criminal mastermind does, and my mouth began to water at where this little humble little band from Louisiana could go. It appeared to be in its infant stages, and they were just a short period removed from still calling themselves “Sam Doores + Riley Downing and the Tumbleweeds.” I picked up one of their CD’s. It showed promise, yet you knew the future of this band would be what was worth banking on.

But I was already too late to be credited with a discovery. By the time The Deslones had trekked out to SXSW 2013, they were already being courted by Bloodshot Records, New West, and who knows who else. Eventually the settled with the latter, and that’s where this debut, self-titled LP emanates from.

The Deslondes is not a songwriters project per se. This is not a superpicking troupe or a project that’s all about exuding a bunch of punk energy through unplugged instruments. On paper, this band doesn’t work at all. It’s too busy, there’s no discernible frontman or definable direction, and there’s nothing fashionable or cutting edge about their approach or style. 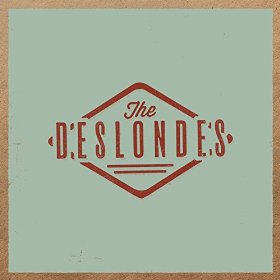 But The Deslones have something that every band wants but few have—something you can’t learn in music school or structure into a band on purpose. It’s that undefinable “vibe” or “it.” It’s that quirky nature that you either have, or you don’t. It’s extra quantities of chemistry enhanced by a regional flavor that as a listener you could never say you have a craving for until discover it, because it is so unusual, but inherently intuitive and familiar all at the same time. It’s the accidental magic that happens sometimes when random friends get together to play music, only it happens every night. It is The Deslondes.

We’ve been wearing out the records of neotraditional roots bands for years, but we’ve never heard one like this. This is a new way of making old music. When the first song “Fought The Blues and Won” starts out with a Fats Domino piano rhythm indicative of the song “Blueberry Hill,” you have the sense immediately this is something a shade different. New Orleans never gets fair credit in the country world for being one of the essential origination points of the music, but when it comes to The Deslondes, this knowledge is baked right in, and pushed to the front.

From New Orleans originally, The Deslondes, and their default frontman Sam Doores had a slight head start in the Americana scene from being close friends with Alynda Lee Segarra of Hurray for the Riff Raff. But what truly makes The Deslondes unique is this really is five young men all contributing equally. They all write songs, they all sing and harmonize, many switch instruments in and out, and how seamlessly it all works is at the heart of its enchantment. No ego would be allowed to dwell within The Deslondes boundaries—it would be starved and spit out immediately. There’s just no space for it.

At the same time, this project still feels young. And I would be lying if I said it wasn’t a challenge translating the live vibe one witnesses when watching them perform in a thrift store parking lot unexpectedly, to putting them in front of a bunch of microphones in a stuffy studio and telling them to try and recreate the magic. I’m not saying The Deslondes magic didn’t make it onto the record, but it may be beneficial to first experience it live to understand the approach they take, and necessary to pick up on that vibe in the recorded context.

And once again we get a record where it was recorded to sound old and scratchy, which I agree fits the motif a band like The Deslondes is throwing down, but makes you wonder if a more clear audio experience would afford this music a much wider listening audience. It is a fuzzy-sounding album to begin with, and then they have a song “Time To Believe In” which is even more vintage-sounding and throwback. It’s like a Spaghetti Western song which actually works for the old-school feeling.

With all of the talk of R&B influences overtaking the sound of mainstream country right now, The Deslondes do this same treatment of mixing country and soul, only they do it in a 60-year-old context when the two styles were still in their nascent years, and their similarities were so much more apparent and intuitive.

A lot of artists and bands reach for that plateau of originality, but The Deslondes actually have achieved it. But even more enchanting is the acute sense that the best from this band is yet to come.

Preview & Purchase Tracks from The Deslondes