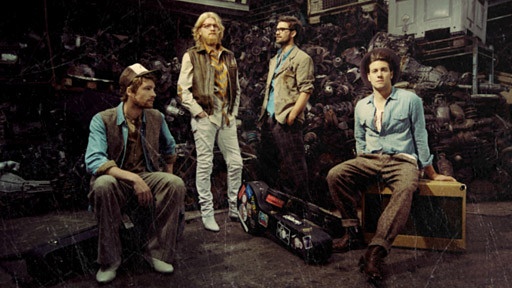 Holy mother. Find something big and heavy to grab on to and hold on tight, because Deutschland’s Dinosaur Truckers are about to blow your ass DOWN!

Not since the legendary days of the .357 String Band have we seen this combination of machine gun speed and precision mixed with sheer energetic madness. Instrumentation at the height of human abilities and high caliber songwriting and composition like this defy all the stereotypes when you must resort to using “punk” as a prefix to describe a band’s blazing speed and unrelenting attitude. While the Mumfordization of roots music has left so many string bands looking for the right watered-down derivative to forge mass appeal, The Dinosaur Truckers offer up the pure, uncut, unadulterated form–potent and dangerous and not for the faint of heart. Listen to The Dinosaur Truckers at your own risk.

I know what you’re asking. How in the world can four guys from Germany, so foreign to the soil that bred bluegrass music be so good? Free from scene or stereotypes or silly arguments and expectations of what bluegrass is or is supposed to be, The Dinosaur Truckers can simply put their music out unhinged and uninhibited, and wait for the rest of the world to figure it out.

And these dudes might be new to us, but they’re not new. Their first album Songs For Homefolks came out in 2008, and their followup Down This Road was released in 2009. Their latest, self-titled album will be released in Germany on April 12th, and according to Amazon will hit the US April 26th. They’ve played more than 100 shows in 2011 and 2012 respectively, and have toured Germany, Austria, Switzerland, The Netherlands, Belgium, and will be playing Muddy Roots Europe this summer.

With a new album to poised to invade the English-speaking world and a wild-eyed energy, The Dinosaur Truckers are a band to watch, and you can do that below.