The Dirt Daubers to Release “Wake Up, Sinners!”

In the still relatively young underground roots scene, there’s only a few folks you could really call a “legend”, but one would certainly be Col. JD Wilkes of Th’ Legendary Shack Shakers. Over the last couple of years, the “Jekyll” to JD’s Wilkes “Hyde” from the madhouse Shack Shakers performances, has been a side project called The Dirt Daubers. Recently The Daubers have picked up steam, including a recent tour with Scott H. Biram. They released a homespun self-titled album in 2009 but are now planning their first proper release Wake Up, Sinners! for September 13th via Colonel Knowledge Records, distributed by Thirty Tigers.

The Dirt Daubers include JD’s wife Jessica on mandolin, and Shack Shaker’s bassist Mark Robertson. A recent press release gave some good insight into what songs and style we can expect on the album: 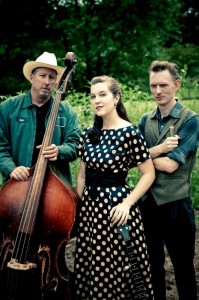 Mixing acoustic rockabilly, blues, jazz and country into a thrilling Frankenstein hybrid, Wake Up, Sinners is a collection of raw originals and covers, recorded together in real time in a big, live, open room…From the crooked, Gothic hymn of “Wayfaring Stranger” to the Coney Island dream of “She and Us Pets,” the band knits together a patchwork of vivid American imagery… topping it off with a none-too-subtle, acoustic-sonic sucker punch.

On their rollicking homage to working-class heroes, “Trucks, Tractors and Trains,” the sounds of J.D.’s harmonica buzz in the breaks between his old school clawhammer banjo.  But Jessica holds her ground, belting out fiery lyrics over the Hot Jazz jangle of “Get Outta My Way.”  And the wooden thump of Mark’s “bull fiddle” takes a wild turn in the Gospel rave-up “The Devil Gets His Due.”

Other songs, such as “Can’t Go to Heaven” recount real stories of real people.  From the opening sound of distant thunder, you are instantly swept into the dramatic, TRUE tale of the mysterious John Akin, a misunderstood bogeyman from the deep woods of Kentucky. And the ghostly polka of Jessica’s original “Be Not Afraid” is a tribute to her grandmother, whose memories of a bygone time are hauntingly recounted to bittersweet effect.

When I interviewed JD Wilkes about a year ago, he mentioned he would probably always do the Shack Shakers “just to get the devil out of me”, but explained how he found the simple approach of The Dirt Daubers appealing.

I’ve always appreciated the roots of what we do. Sometimes I think the roots of it get lost in the rock n’ roll aspect. It’s just a way of breaking it down and making it a little more obvious. I also just indulging my appreciation for mountain music, string band music, jug band music, hot jazz. I just love that stuff and want to be a part of it. I feel sometimes the sheer volume of the Shack Shakers diminishes it at times. I want to be able to purely touch base with that.

You can catch both Th’ Legendary Shack Shakers and The Dirt Daubers at this year’s Muddy Roots Festival Sept. 3-4.