This Saturday (4-6-13) Texas music legend Ray Wylie Hubbard will be hosting his 4th Annual Grit ‘n Groove Fest at the Whitewater Amphitheater in New Braunfels, TX. Over the years, Hubbard has made a name for himself as someone who’s famous for not being famous. You won’t find a true country or blues fan who hasn’t heard the name, but it is other musicians that make up the core of the Ray Wylie fandom, allowing the influence of his “grit ‘n groove” approach to spread far and wide throughout music.

Where most musicians might peak in their 20’s, Ray Wylie Hubbard seems to be hitting his stride in his 60’s. Since the release of his latest album The Grifter’s Hymal, he’s been asked to play David Letterman, and write and record with Ronnie Dunn of Brooks & Dunn fame. Ray Wylie spoke to Saving Country Music about the inspiration behind Grit ‘n Groove Fest, and about the surge in interest in his music since the release of The Grifter’s Hymnal.

You played David Letterman a couple of months back, and they let you play an extra song for the web, which they don’t do for everybody.

Yeah, how cool was that? The story is about 4 months ago my booking agent receives a phone call and this girl said she was Jennifer from Worldwide Pants, and Dave would like to know if Ray would do his show. She didn’t know what Worldwide Pants was so she goes, “Dave who?” And Jennifer goes, “Dave Letterman, January 9th.” And the booking agent goes, “Well let me make sure he’s not playing a happy hour gig in Waco, those things are hard to re-schedule.” So Dave said he wanted us to play the song “Mother Blues” but we only had 3 minutes and 35 seconds. So we take out a couple of verses and then we get up there and after we finish and he says, “Thank you, goodnight,” he asks if we’ll do “Screw You, We’re From Texas.” And I said, “Man, you’re from Indiana.” And he said, “Yeah, but I like the attitude.” So we did the extra song for the website which was really really cool of him.

Wow, so Letterman called you?

Well he didn’t personally, but yeah Jennifer who works at the production office did. Yeah, we didn’t have our publicist working it at all. Somehow he’d heard the song and had his people call us.

You’ve been doing a lot of touring lately. Do you get the sense that this is a time to push in your career? That’s there’s a renewed hunger out there for what you do, and now is a time to strike?

Well The Grifter’s Hymnal came out and I was really proud of that record, and it seemed to strike a chord with people. So we’ve really kind of worked that record through the web and all of that, and people have found us because as you know we’re not mainstream country and all of that. If you haven’t heard of Jerry Jeff Walker, you haven’t heard of me. So to answer your question, yeah we’ve really been pushing it and are really enjoying it. 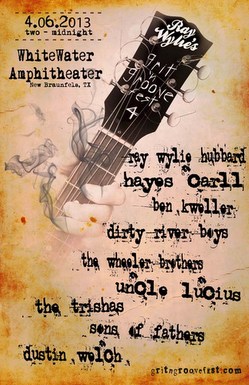 You’ve got so many things going on. You’re touring, you’re always writing, you’re writing with other people, you’re doing songwriting workshops. So why bite off another chunk and decide to do a festival of your own?

I play a lot of festivals and I really enjoy them. When I started off I wanted to do a festival of the musicians and songwriters that I really like. We did the first one in Luckenback with Gurf Morlix, Sam Baker, The Trishas, and Hayes Carll. So it’s really kind of a festival of friends. I know these people. It seems like most of the musicians I listen to, I’m very fortunate to know. So we decided to make it a festival of people that I like and I respect their writing and what they’re doing. This year I’m really proud of the lineup.

For the folks out there that don’t know, what does your term “Grit ‘n Groove” embody?

Well the grit is you’ve got to have some dirt and soul to your music. You have to write some songs that have some depth and weight to them. That have some grit to it, that’s not just homogenized pap, run-of-the-mill, top 40 country songs. They have to have a little bite to them. And then the groove is that it’s got to feel right. And the whole festival, it’s just the vibe of it, you know what I mean? It’s a bunch of cats that give across a really good vibe. There’s no divas. These musicians have chops and their heart is in the right place. That’s kind of the basic of Grit n’ Groove.

Well, it is important. Maybe you’ve heard of Hayes Carll, but you haven’t heard of the Dirty River Boys. But because of the roster, if you haven’t heard of them you’ll say, “Well I think I’m gonna like them because Ray Wylie likes them.” (laughing). You know what I mean? I just kind of shows my taste in music. With The Trishas, I think that was only their second gig when we did Grit ‘n Groove for the first time, and they’ve just shot off. And of course Dustin Welch has a great new record out. All these bands, Uncle Lucius, The Wheeler Brothers, Sons of Fathers, those guys are just exploding down here, and are about to get big nationwide.

You said earlier that if you don’t know Jerry Jeff Walker, you may not know Ray Wylie Hubbard. It’s funny because in certain circles, the name ‘Ray Wylie Hubbard’ holds so much weight. We’ve been getting these little bits and pieces of information about you writing and recording with Ronnie Dunn of Brooks & Dunn. Without giving too many of the secrets away, how do you know Ronnie Dunn? Does it go back to your Oklahoma days?

No, I had never met him before. I get this phone call, and he says, “This is Ronnie Dunn.” And I’m like, “Who?” And he says, “Ronnie Dunn.” And I said, “You’re kidding.” And he said, “No, Tony Joe White gave me your phone number.” Ronnie told me he was talking to Tony Joe White and told him how much he liked The Grifter’s Hymnal album. And Tony said to Ronnie, “Well you ought to write with him.” So we went up there, met with him, and wrote 4 songs. They’re really cool songs, I really like them. Ronnie actually came to Austin. He said, “I want to get that Grit ‘n Groove. I want to get The Grifter’s Hymal sound.” So we went to George Reiff’s house where I recorded Enlightenment, I got Rick Richards and George Reiff who’d just been out on the road with Joe Walsh. And then I got Brad Rice of Son Volt on guitar, and of course Mack, Ian McLagan who once played with The Stones and Faces. So lo and behold, I had him a hellacious band, and he came here and we cut these four songs, and they’re just really roots cool. So we’re talking about maybe trying to write some more, and see what happens with them. And I’ll tell you what, that son of a gun can sing, and his heart’s in the right place as a songwriter, it really is. I really enjoyed it. You know I’ve written songs with other people, but songs that I wouldn’t do. But these with Ronnie I’d do them in a heartbeat.

So once again it’s the strength of The Grifter’s Hymnal. You just put it out there, and stuff is coming back to you.

I guess it is. I’m really proud of the record. You know we cut it in an old Methodist church built in 1888. We went in there and set the whole record with divine reverb. I wanted to do a record like the first Buffalo Springfield, the first Beatles, the first Stones, the first Black Crowes. The first records they did, those were real guys playing their music. So we just plugged the guitars directly into the amps, no pedals. When we mixed it we left in all the coughs, string noises, pedal squeak, and 60 cycle hum. You may not like the singer or the songs, but you cannot deny that it sounds really good (laughing). 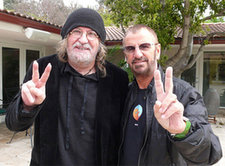 That’s also kind of what happened with the Ringo (Starr) song. I met Ringo out in California. He said, “I really like your songwriting.” and I said, “I really like yours too.” and he said, “People don’t think of me as a songwriter, they think of me as a drummer and a Beatle.” I said, “On Beaucoups of Blues there was a song on there called ‘Coochy Coochy.’ It was kind of a bonus track. I love that song because it’s just one chord.” So we were at a studio, and we just turned on the tape and just did it, you know? Just one time through. We sent it to Ringo, and he said the drums were too good, so he just played shakers and sang. I was really fortunate and grateful to have Ringo on it.

Ringo Starr’s another name. You’re the artist that the artists are listening to. It speaks to your influence, and if people really want to find the heart of the music, that’s where to go.

Your son Lucas plays guitar with you upon occasion when he’s not bowling. In your opinion, do you think he’s a better bowler or guitar player? And are his varying passions in some way a validation that you raised him right, to teach him to follow his heart?

That’s a great question. He earned the gig when he first said he wanted to play full time and not just come out and play a couple of songs. He didn’t just want to come out and show off. So we played a full 90-minute set with him and afterwards I talked to George (Reiff) and Rick (Richards) and they said, “Yeah, he’s in the band.” Because he doesn’t show off, he just plays the lick. Then again he’s been working at this bowling alley for 2 1/2 years. We did Letterman on a Wednesday and the next night he bowled a 300–the youngest kid to bowl a 300 at the Sunset Lanes. This summer I think he’s gonna start getting into a little engineering. He’s gonna kind of do an intern with George Reiff. I’ve never forced him to do anything. I always give him a choice. But I am very proud of him.