See, this is just the kind off roguish garbage that we need more of.

With all the stuff missing from today’s country like steel guitar and fiddle, strong voices, quality songwriting, heartbreak, talent, twang, actual country music, not enough is made about the loss of wit and humor in much of the country music you hear today. Whatever happened to the hilarious songs of Shel Silverstein and the innuendo of Roy Acuff’s early material? Like so much of the great stuff about country music, it’s mostly gone.

That’s where the Hellroys out of Ohio come in with their new record, Hellroys Is Real. And no, this isn’t just another version of Wheeler Walker Jr. with a bunch of salacious material and swear words being run down your throat machine gun style. No offense to Ol’ Wheeler, but there’s nothing laid between the lines there. With an outfit like the Hellroys though, a lot more tact goes into this music, and the result is something that is enjoyable to a wider crowd, and longer lasting.

Humor in country songs is just so much better when you have to beat around the bush a little bit, and rely on innuendo and metaphor to get your point across. It gets the imagination of the audience stirring, and it takes a lot more cunning to craft. Not that the Hellroys don’t let a dirty word slip in here and there, but they let your imagination go to the bad places first. They just light the spark. 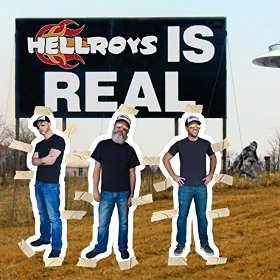 And like all great sarcasm, a lot of it works so well because it’s rooted in truth, like in the opening song of the album, “My Truck Is Loud.” All of us know one of these yahoos, or see them at the local Wal-Mart or whatever. It’s a universal archetype no matter where you are in America, and that’s what makes it so hilarious.

The Hellroys have a great energy to their music. It’s country with a punch, sort of like the the side project country stuff of Eddie Speghetti, but funnier. They bring skill and smarts not just to the lyrics, but to the music, and walk the line between humor and indecency just about perfectly, like it in the ode to corporal punishment, “My Kids Are Getting Too Big (to Hit)” or the entertaining “Weremilf.”

The Hellroys call themselves the “Sole Purveyors of Dumb Country Noise.” That’s probably an appropriate subtitle. But it’s also tightly-crafted and dare I say kind of intelligent for what it is. But most importantly, it’s really funny, and just downright entertaining.

When you’ve worn out all of your Unknown Hinson records and if you were one of those kids that grew up on the stylings of Weird Al Yankovic, you’ll love yourself some Hellroys.