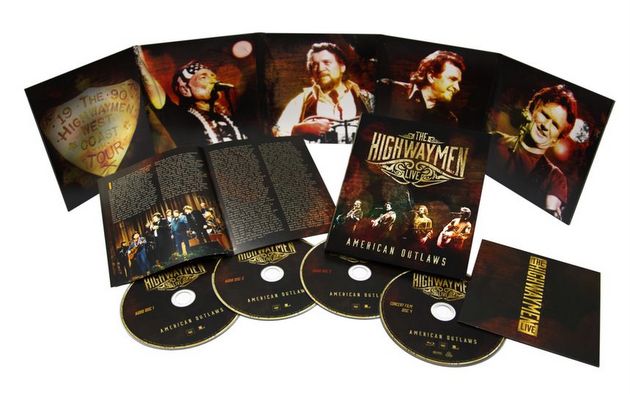 As first announced by Saving Country Music in December, country music’s most famous supergroup, The Highwaymen, will be getting their own American Masters television special. The Highwaymen: Friends Till the End will air Friday, May 27th, at 9 p.m. on most PBS stations as part of the documentary series’ 30th anniversary season. It will tell the story of The Highwaymen through vintage performances and new interviews about life on the road and in the studio with the “Mount Rushmore” of country music, including new interviews from the band’s surviving members and archival footage from both Johnny Cash and Waylon Jennings.

Just announced, accompanying the documentary will be the release of a four-disc CD/DVD live box set called The Highwaymen Live – American Outlaws. It will be released May 20th—a week before the documentary. It will include one disc of live performances from Farm Aid festival performances in 1992 and 1993, a two discs of a complete recording from a show in Uniondale, New York in 1990.

The Highwaymen: Friends Till the End is the second American Masters documentary special of 2016 to cover country music. Loretta Lynn: Still a Mountain Girl aired on March 4th to coincide with the release of her new record, Full Circle. The film explored the country legend’s hard-fought road to stardom, and her struggles to balance home life with with her music career. American Masters also has a special on Janis Joplin coming May 3rd.

You can see a trailer below.

Disc 1 (Recorded live at Nassau Coliseum in Uniondale, New York, March 14, 1990)
1. Mystery Train
2. Highwayman
3. Mammas Don’t Let Your Babies Grow Up to Be Cowboys
4. Good Hearted Woman
5. Trouble Man
6. Amanda
7. There Ain’t No Good Chain Gang
8. Ring of Fire
9. Folsom Prison Blues
10. Blue Eyes Crying in the Rain
11. Sunday Morning Coming Down
12. Help Me Make It Through the Night
13. The Best of All Possible Worlds
14. Loving Her Was Easier (Than Anything I’ll Ever Do Again)
15. City of New Orleans
16. Always on My Mind
17. Me and Bobby McGee

Disc 3 (Live tracks recorded at Farm Aid V and Farm Aid VI, March 1992 and April 1993)
1. Mystery Train
2. Highwayman
3. The King Is Gone (So Are You)
4. I’ve Always Been Crazy
5. The Best Of All Possible Worlds
6. City of New Orleans
7. Folsom Prison Blues
8. Intro/Highwayman
9. Shipwrecked in the Eighties
10. Desperados Waiting for a Train
11. One Too Many Mornings (Previously Unreleased Studio Recording)