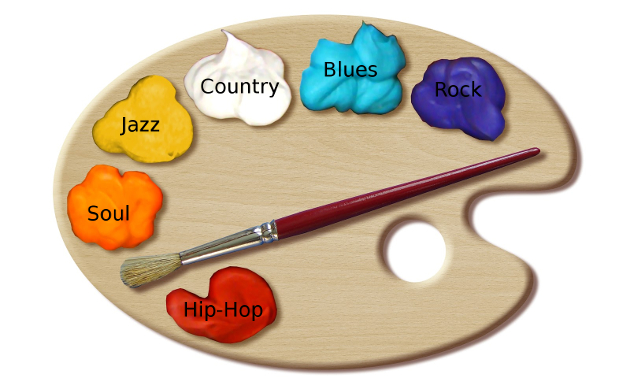 The topic of the importance of music genres comes up often in country music, especially over recent years (and recent days) as we’ve seen the encroachment of other genres into country music like never before. For years Saving Country Music has been forwarding the theory that all popular music in America is becoming one big mono-genre, where no matter what radio station you pull up or popular album you stream, it all pretty much sounds the same.

As the mono-genre has come to fruition, it’s very popular for music artists and fans alike to ask, “Why do we need genres?” as if it’s an outmoded system that doesn’t make sense in the modern world and should be relegated to the dustbin of history. Today, people listen to all kinds of music. They’ll listen to a hip-hop song right after a country one. We even hear artists whose music we might appreciate, not just the mainstream set, say they see the classification of music into genres as unnecessary.

On paper, there’s nothing wrong with combining two or more genres of music to create something unique. The problem is that often when this enterprise is undertaken, it’s not creating something unique, it’s meant to mimic something that is patently similar to everything else being released in popular music, making it even more uninteresting and non-creative to try and appeal to as many people as possible, regardless of what the artist may attempt to sell you. Folks will say combining influences is necessary for music to “evolve,” but that evolution regularly sounds like devolution with rehashed melodies and structures. Even more dangerous is when artists or the media wrongly classify a song in a genre when it is clearly the product of another genre, even though many times these are the same people who will preach that genres don’t matter. Breaking down genres is not enhancing the diversity of popular music, it is the death of diversity in popular music.

This issue came into clear focus recently when Beyonce was invited to perform her supposed country song “Daddy Lessons” on the 2016 CMA Awards. Many country fans had a problem with the CMA’s putting a pop star on a country presentation regardless of who that pop star was, as they have had similar problems with other pop stars on awards shows in the past. But amidst the Presidential election season, all of a sudden it became a story about how racism was driving the dissent against Beyonce on the CMA’s. Certainly a few anecdotal comments can be cited as where racism was the driving force behind the dissent, but many country music fans and artists have always been opposed to the inclusion of pop in the genre.

To try and illustrate why it is important to keep the influences of America’s founding genres pure, I’ve always used one tried and true illustration. And to prove that this illustration precedes Beyonce at the CMA Awards, instead of presenting it anew here, I’ll transcribe it from a recent podcast from Wide Open Country I participated in before the 2016 CMA Awards took place.

“Think of genres like dialects. One way I try to illustrate it is, think about an artist’s [palette]. Think about Bob Ross standing there with his fro, and he’s got his [palette] there with the oils on it in the primary colors. Then you take those primary colors and you mix them in to make certain hues for shadows and trees. The genres of American music are like those primary colors. And then you can take those colors and mix them together, and you can do whatever you want with them. That’s art. That’s how art gets created. However, if you took all of those primary colors, all those paints, and put them in the middle of the artist’s [palette] and gobbled them up, you can never pull those primary colors back out. That mishmash is the mono-genre, which is all the genres all together. So if you need that pure white color for those wispy clouds, it’s no longer on your easel. That’s why it’s important to keep those pure influences of each of these individual American music genres autonomous. Artists can do whatever they want with those [genres, or colors], but if you start to say, ‘Blue is actually white,’ that’s where I start getting up on a soap box and preaching. Blue is not white. White is white, and blue is blue.

“With Lady Gaga, Beyonce, and a couple of these other artists, it’s all become a media narrative. Pop media loves to write the “gone country” story. Jay-Z’s gone country, Lady Gaga’s gone country. It’s very buzzy. It gets people’s attention. And so whether there’s any country validity to this music or not is irrelevant. It’s just a good narrative. It’s a good way to get people to pay attention to your song, so we’re seeing it a lot. And as you see that happen, and then people actually go listen to that song, that’s what dilutes the integrity of country music. That’s what takes that pure white color and adds a little bit of blue, and adds a little bit of red to it, until you don’t know what country music is anymore. And then you talk to people that are 16, 18, 21, and they’re like, ‘What is genre? Why do we even need genres? Why do we need these influences?’

“When country music very first started off back in the 30’s and 40’s, there was no (or very little) recorded music. The music that was played as country music, you had bands going into radio stations all around the country and playing live to those local audiences. That’s how Hank Williams started, that’s how Bill Monroe started. And then you would have broadcast shows like The Grand Ole Opry or the Ozark Jubilee. So you could go to Dallas, TX, or Shreverport, LA where the Louisiana Hayride was, or Nashville, TN, or you could go to Bakersfield, CA, and each one of these radio stations you would listen to would have a distinct dialect to it. It was all country music, but each one was a little different. Each one had a different approach to it. The ones in Appalachia were more bluegrass and old time. The ones in Texas were more Western Swing. The ones out in California were more honky tonk. And if you take it all and you put it together, you lose that distinctiveness.”

The point of trying to preserve the autonomy and pureness of genre influences in American music has never been about attempting to limit creativity, and it certainly isn’t about racism. It has been an effort to enhance creativity and the diversity of music by preserving the tools (or influences) that music artists can work with, bestowed by the brilliant tapestry which is America’s founding music genres, similar to the basic colors on a painter’s palette they then use to blend into whatever hue they wish. The diversity of American culture is what has made it the strongest and most vibrant culture in the history of the world, and questioning the importance of genre, or misrepresenting music as a certain genre that it’s not can injure or destroy these important influences, and the distinct musical dialects that make American music so compelling to both the heart and soul of listeners.