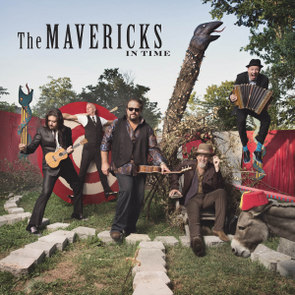 Take the West Coast country coolness of Dwight Yoakam, the haunting tremolo of Roy Orbison, the sweaty rhythms of Los Lobos, and what you get is Miami’s indescribable and enigmatic throwback old-school all-things-to-all-people house band for America known as The Mavericks.

The Mavericks are like some strange Central American fruit you purchase in South Texas that once you cut open the rind a bounty of greatness starts gushing out. Its taste is both exotic and warmly familiar, and its supple membranes are revitalizing to both the body and spirit.

Some bands like to espouse themselves “defying genre,” when many times this is just a front for lacking a musical compass or an original sound, hoping disparate elements will meld together simply from the uniqueness of the experience. That is not the case with The Mavericks. Every one of their songs is a country song. Every one is a Latin song. And every one is rock n’ roll, all the way through. It’s because their influences overlay each other in parallel layers instead of being haphazardly mixed together. They aren’t a blend of genres, they’re every classic genre all at the same time. The Mavericks’ sound means something to such a wide range of people by being able to tug at the music roots of listeners from a myriad of diverse backgrounds.

Looking at this album on paper, you almost don’t want to give it a chance. How much more could the Mavericks have left in the tank? Sure they did some good stuff in the 90’s, but then there was the 2004 split, and frontman Raul Malo’s solo career that has seen 6 albums no less. At some point every artist reaches their limit for creative output, and it’s not hard to surmise that a band like The Mavericks had their best days in the past. And In Time was released by the Valory Music Group, which is an imprint of Scott Borchetta’s Big Machine Records and the home of Taylor Swift, Rascal Flatts, etc. etc. Good, cool music can’t come from that barn, can it?

If In Time is any indication, yes it can, and it can still come from The Mavericks as well. This album isn’t just a good album from The Mavericks, it might be the best album in their nearly 25-year history, and its one of the best put out so far in 2013.

Back in the mid 90’s, The Mavericks were winning CMA Awards and putting out platinum-certified albums, despite not having one top 10 single and not really fitting in with the regular country crowd. But to get there they still had to somewhat play the game. Now The Mavericks have nothing to lose, nothing to prove to anyone, and this latitude allows the original idea behind the band to fully blossom. Raul Malo’s songwriting has never been better, and his voice never more laden with character. Where their 90’s material might feel somewhat dated to the modern ear, In Time feels timeless, with a classic sound, and a warm, analog patina enveloping the entire project.

This is not just a great album for The Mavericks, it is a great addition to the American songbook as an example of the melting pot of cultures that have come together to birth some of the most vibrant and compelling music heard by man.

Preview & Purchase Tracks from In Time