The People Who Read the New People Country Magazine

2014 is turning out to be the year of the celebrity crotch sniffer in country music. The word is out that country is fertile ground for advertisers and is a fast-rising subject in popular culture, so interlopers and carpetbaggers are rolling out the red carpet for country all over the place, and it’s getting quite stupid.

If you have anything to do with “media” the chances are you’re betting big on country music in 2014. Clear Channel’s trying to build a country music empire that would give Napoleon a stiffy, Cumulus has the brilliant idea of making country music food, paint, clothes, and furniture, Rolling Stone has even promised to get into the country music game, but the stoners at Rolling Stone got beat to the punch by none other than People Magazine, who has just launched their own dedicated country music website. Yes, how did we ever get along without this before?

I know, you’ve been wondering who’s going to broach such hot button, riveting, in-depth country music stories like “Luke Bryan Is the Kevin Bacon of Country’s Gang of Georgia Boys” (No, I didn’t make this title up), or “Third Child on the Way for Joe Don Rooney” (That’s the non weird-looking dude from Rascal Flatts), or “Dan + Shay: 5 Things to Know About Country’s Hot New Duo” (The only thing you need to know is their label have anointed them superstars because of their looks, despite not having the talent to even deserve a developmental deal). Well now we’re all in luck, because People CoUnTrY is HERE! 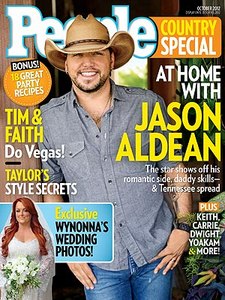 You can’t say that People Magazine hasn’t been on the country beat before though. Remember when they ran that story all about how Jason Aldean was the perfect husband and father …. the same week he was caught feeling up some American Idol castoff in L.A.? Now there’s a scoop.

Actually, I give People Country credit on this point: there’s so many country music outlets these days where the music is just an excuse to talk about people in the public eye instead of anything substantive, at least someone has the rocks to do it without pretense. Plus, I scored some killer makeup tips from their tour of Taylor Swift’s makeup drawer!

The fact the People Magazine now has a dedicated country wing proves the theory that people aren’t into popular country music for the music, but for the celebrity culture and image that surrounds it. They’re too busy fighting off the glare from Jason Aldean’s sparkling white teeth to pay attention to the fact that the music sucks. The only way I know how to solve this country music conundrum is to call in the Kinkster.