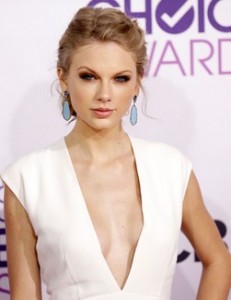 Tonight in New York City at the Lexington Avenue Armory, Taylor Swift will be the musical headliner for the Victoria’s Secret annual fashion show, set to air on CBS December 10th. No, it’s not likely Swift will be strutting around in any lingerie herself, though she has been known to sample their wares in the past, and previous performer Rihanna did get somewhat risque in her performance last year. But the decision still seems quite curious from Swift who has worked diligently to maintain her squeaky clean, girl next door image throughout her career.

As Yahoo Music points out while calling the Victoria’s Secret fashion show out of Taylor Swift’s “general zone”:

Love or hate her, nobody can deny Swift’s built an image around being a PG-rated role model…A lingerie show doesn’t really seem to jibe with the Swift we know, even the one who gets caught allegedly spending the night at Harry Styles’s hotel. It just seems too risquÃ© for this particular American Sweetheart, whose skimpiest costume of late was a retro polka-dot two-piece worn on vacation with the Kennedys…definitely not the kind of thing you see on the VS runway.

Then Yahoo points out what really seems to be at the heart of Taylor Swift’s Victoria’s Secret performance, saying, “Her appearance at the show, whether fans approve or not, seems to be yet another carefully considered move in her career and personal evolution.”

And this is what really seems to strike at the heart of the matter. It’s not necessarily how much skin will be on display at the show that is so alarming as much as the appearance seems like such a calculated assessment of Swift’s public perception and an attempt to recalculate it towards where they want it to be, instead of where it is. The “girl next door” archetype is not just one of not being flashy or provocative, but also one of being unassuming, honest, and uncaring of popularity or public perception.

The stereotype of pop music is that it wants to appeal to adolescents and teenagers, because they are the drivers of popularity and commercial success for pop music stars. Old people don’t buy albums, as Blake Shelton once famously said. But everywhere you look in the pop world, from Miley Cyrus and her recent VMA Awards antics, to Justin Bieber, Selena Gomez, Katy Perry, to now Taylor Swift, you see artists wanting to break away from their adolescent audience, and being willing to deal with a public backlash to do so. Is this because they want to grow as artists, or because in the end the adolescent/teenage demographic, however lucrative initially, also enacts a ceiling on an artist’s commercial success because it fulfills such a narrow niche of the market?

The next question is, what artists are replacing Miley Cyrus as she struts around with a foam finger, Justin Bieber as he gets busted from smoking pot, or Swift as she performs for Victoria’s Secret? Is there a new generation of pop stars that are appropriate for adolescents, or are adolescents following their favorite artists into the adult world prematurely? You have to give Taylor Swift credit for subtly at least. Where Miley Cyrus is swinging around naked on a wrecking ball, at least Taylor Swift, like Victoria’s Secret, leaves something to the imagination.

Taylor Swift struck such a nerve with the American public and filled a very underutilized niche in the pop music world by simply being herself. This approach was so refreshing, however calculated it was at the time, and adolescents, teenagers, and their thankful parents flocked to the Taylor Swift camp in droves, seeing her as just a well-meaning girl writing songs in her bedroom with her guitar.

Every woman should have a right, especially when they’re about to turn 24 like Taylor Swift, to explore their sexuality and image without fear of backlash or judgement from an uptight world. But there’s little justification or excuse for not being yourself. And whether it’s enlisting super producers from the pop realm to manufacture her mega hits, or playing the Victoria’s Secret fashion show to reshape her public perception, the continued evolution of Taylor Swift from that girl in her bedroom with a guitar to a mega entertainment franchise where every public move is calculated, is unfortunate.

**UPDATE (11-16-13): Apparently Saving Country Music and Yahoo Music weren’t the only ones who thought Taylor Swift was like a fish out of water performing at the Victoria’s Secret fashion show. Australian supermodel Jessica Hart let it be known during the show’s afterparty in New York that Taylor Swift “just didn’t fit.” Swift wore a sparkly silver dress and another outfit made out of the British Flag during two performances during the show.

WWD reports that at Tao Downtown in Manhattan, Jessica Hart said, “I think, you know what, God bless her heart. I think she’s great, but I don’t know, to me, she didn’t fit. I don’t know if I should say that.”

Later it was reported that Victoria’s Secret chief marketing officer Edward Razek said Jessica Hart was “wildly misrepresented,” but didn’t offer any clarifications on what she meant, or what she said.