The Reverend Horton Heat Is Back with “Rev”

It may not be possible to give The Reverent Horton Heat enough credit for his contributions to revitalizing the roots of American music. But since he never reached the mainstream level of success like a Brian Setzer for example, he never seems to get his proper due. To his loyal fans though, Jim Heath is nothing short of a guitar god (with his own signature Gretsch model to prove it). He’s arguably the biggest and most-influential name in modern day rockabilly/psychobilly music, was one of the first to expose the parallels between rockabilly, country, and punk, and deserves a pat on the back for bringing out opening bands like Th’ Legendary Shack Shakers, Reverend Peyton’s Big Damn Band, Hank3, and The Goddamn Gallows just to name a few. 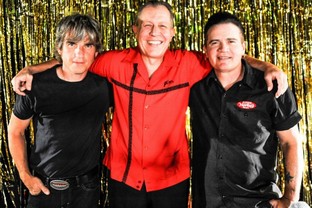 The 90’s is when The Reverend Horton Heat established himself at the forefront of the independent roots world. Out of the gate with the band’s debut album Smoke ‘Em If You Got ‘Em, they proved they were somehow cooler than the punks, and better players to boot, and as authentic as the honky-tonkers. Then when the swing era came in the late 90’s, The Rev was once again ahead of the curve, releasing It’s Martini Time in the middle of 1996 right before the revival took stride. The Rev’s most well-rounded album might have been 2000’s Spend A Night In The Box. Already established as an influential force in both the guitar, punk, and rockabilly worlds, Jim Heath showed he could also be a noteworthy songwriter with tracks like “It Hurts Your Daddy Bad” and the countrified “The Bedroom Again.”

But the 2000’s found The Reverend Horton Heat somewhat adrift directionally, despite reaching new heights in both touring and popularity. The Rev was finally gaining some recognition, bolstered by a prominent appearance of the signature song “Psychobilly Freakout” in the wildly-popular video game Guitar Hero. But maybe the money usurped some of the muster for the music, and studio offerings like 2002’s Lucky 7 and 2004’s Revival felt a little forced despite a few notable moments, like the music wasn’t flowing, and they were trying to reach for the magic they had captured the decade before by just trying to play fast and hard.

Long-time drummer Scott Churilla left the band in 2006, replaced by Paul Simmons formerly of The Supersuckers. Jim Heath started a side project featuring blues, jazz, and rock standards called Reverend Organdrum that was considerably more sedated than the Horton Heat experience, leaving some to wonder if the days of stage leaps off of Jimbo’s upright bass were over. Hey, our favorite rockers all have to age at some point. Crowds went from moshing punks to blue collars and teenagers who knew The Rev through Guitar Hero first.

So here it is in 2014, and though Horton Heat has already established himself as the King of Psychobilly and a god of the rockabilly world, there’s the sense that the music needed a new start. But if you venture too far away from the established sound, you solicit sideways looks from your core audience, similar to how if you keep on serving up the same sounds, the routine could become stale. 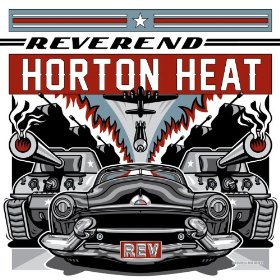 Helping to shake things up, Scott Churilla has resurfaced on drums, and instead of overthinking it, The Rev seems to just lay back with the band’s most notorious lineup, and tap into the magic that has made The Reverend Horton Heat one of the most entertaining roots bands in the last quarter century.

The new album Rev makes use of the dual meaning of the ‘rev’ term, and is a pedal down, screaming-tires good time from the start to the finish line. The album begins with two songs that seamlessly segway into each other—“Victory Lap” and “Smell of Gasoline”—in that way The Rev has been known for over the years, harkening back to that badass moment at the beginning of 1994’s Liquor In The Front that began with “Big Sky” and “Baddest of the Bad” back to back.

Though the band is well in their groove here, long-time Horton Heat listeners will recognize they go to some of the same wells they’ve been to in the past a few times in the album. Songs like “Zombie Dumb,” “Schizoid,” and the first single “Let Me Teach You How To Eat” seem to take older song concepts and just shake around the riffs and lyrics a bit. Rev also doesn’t afford you any of those cool, gear-shifting stripped-down countrified songs like “Bales of Cocaine” or “The Bedroom Again” that gave some of the classic Horton Heat albums that extra flavor.

But what Rev does have is an infectiousness and vitality that was missing in some of their more recent offerings. Though “Never Gonna Stop It” doesn’t give much lyrically, this is Horton Heat finding the infectious pocket of his sound. “My Hat” is a is a fun, quick little tune, and “Longest Gonest Man” shows off the capable lyricist we know Jim Heath can be.

Rev is probably not the place to start for someone who’s never heard The Reverend Horton Heat before; I would fall back on Smoke ‘Em If You Got ‘Em or Spend A Night In The Box. But it is a solid, entertaining offering nonetheless, an improvement from some of the other recent projects, and will serve the dedicated Reverend Horton Heat fan quite well.