The Story Behind Tom VandenAvond’s Wreck of a Fine Man 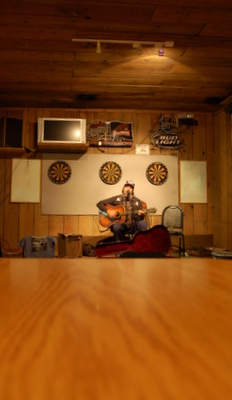 Even if he never made a dime doing it, even if nobody ever doted on him for it, Tom VandenAvond would still be out there traveling around the country playing songs for whoever he could get to listen. He’s unique to the music world in how there appears to be no ego. Instead the quiet, raspy-voiced troubadour is driven by the simple urge to share stories.

VandenAvond, whose originally from Green Bay, Wisconsin, lived in and around Austin, TX for about 8 years before moving to the small town of Oakdale in interior California to “be amongst the cowboys” with fellow songwriter Willy Tea Taylor. “Willy had an airstream open,” Tom explains.

Songs become timeless by having the uncanny knack of feeling relevant no matter when they are performed. The title track from Tom’s latest album Wreck Of A Fine Man falls into that lot. Last week when it was announced Darius Rucker would be the newest member of the Grand Ole Opry, “Wreck Of A Fine Man” seemed to be the best salve for the old soul struggling with the short-sightedness of today’s society.

“I was sitting around one afternoon, and I think I took a nap or something, but I was thinking about Hank Williams and if he was still alive.” Tom explained to me before his set at the Cattlemen’s Saloon in the small town of Rogue River, Oregon last Wednesday. “I think I actually had a dream that he was still alive, and I was kind of thinking about what his life would be like, if people would accept him today. I pictured him living outside of Nashville a little bit, out in the woods you know, kind of keeping to himself. So that was a big inspiration for that song.”

“Wreck Of A Fine Man” mentions the Ryman Auditorium, aka the “Country Music Mother Church” that was the home of The Grand Ole Opry for many years and where Hank Williams made his hay. VandenAvond went on to explain that Ol’ Hank wasn’t the only iconic country singer to inspire the song. James Hand, who has his own album Mighty Lonesome Man set for release on October 16th, also was an inspiration for the song.

“He reminds me of Hank Williams. If Hank Williams hadn’t of died, he would be James Hand. I used to see James Hand every Thursday in Austin at the Saxon Pub. I looked forward to those days. It helped me and my buddies through some hard times listening to that beautiful music.”

“Wreck Of A Fine Man” was featured in Saving Country Music “Best Songs of 2012 So Far” and barring the Mayan Apocalypse, will be on the end of year list as well.