The Tao of Jamie Lin Wilson and “Jumping Over Rocks”

It’s not exclusively the music from our favorite artists that inspires us. It’s how they’re gifted with the tenacity to pursue their dreams fearlessly, and with a willingness to sacrifice we all wish we had, or maybe we did have at one time before life got in the way. But they don’t let life get in the way. They get in the way of life.

There’s just something different about the makeup of Texas singer songwriter Jamie Lin Wilson. Where some would allow the presence of three young children at home to stifle their musical pursuits, Jamie Lin Wilson uses the challenge of balancing motherhood and music as fuel and inspiration. Where so many artists these days call on the inherent unfairness of the music industry to blame everyone else for their lack of success, Jamie Lin worries more about taking advantage of any and all of the opportunities bestowed to her, big or small. Where some may use the birth of their fourth child to slow down and step back from their careers, Wilson uses it as the springboard to release a new album.

Call it The Tao of Jamie Lin Wilson. It’s about figuring out a way to pursue your passions, regardless of the challenges. It’s facing adversity with a cheerfulness and perseverance until the walls in front of you come crumbling down almost automatically. It’s about making yourself available to finish a co-write, lend a backing vocal, or whatever else it takes to wiggle your way into the music scene with a smile and a willingness in your heart, just like Jamie Lin Wilson has been doing for years.

Possibly the greatest endorsement for the value of Jamie Lin Wilson is how revered she is by her peers. From Ray Wylie Hubbard and Wade Bowen, to Cody Canada and Evan Felker, she is often the woman they call on to finish a song, lend a vocal, or invite on stage to add some color to a live performance. Jamie Lin’s hustle would mean little if she didn’t have the talent and expertise to step into just about any musical scenario and make it better. Jamie Lin Wilson has become like the spirit animal of the entire Texas music scene, both as a songwriter to admire, and an inspiration for the type of attitude and approach you should bring to music, and life.

Jumping Over Rocks is Jamie Line Wilson’s second official solo release to go along with her early work with The Gougers, and later with the Texas music supergroup The Trishas. All that feels well in the past now though, similar to how referencing Jason Isbell as “The Former Drive-By Trucker” feels obsolete. Jamie Lin Wilson is Jamie Lin Wilson—The Queen of Texas/Red Dirt’s modern era. 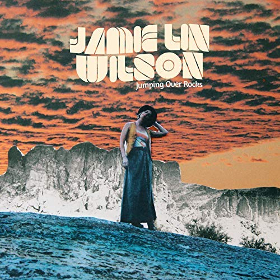 At times Jumping Over Rocks meanders a bit when it comes to the impression it leaves from a musical standpoint. It’s often hard to know what to do with pure songwriters and solo performers such as Jamie Lin since they don’t have a full-time touring band behind them to help establish a unique sound. The production of Jumping Over Rock labors mostly to get out of the way of the songs themselves, keeping things light, sparse, and nebulous to avoid pigeonholing Wilson in any specific sound or genre. This is a smart move. And though it succeeds at this task generally, it also struggles to leave any unique signature aside from a few specific moments in certain songs.

But the songs are what you come here for, and Jamie Lin Wilson delivers a masterful selection of them from start to finish. The crack of her voice in the opening song “Faithful & True” immediately makes the heart succumb to the swell of emotion this album contains, and illustrates why it’s not just her songs, but the strength of her voice colored by a unique warble that makes Jamie Lin Wilson a preeminent artist regardless of what specific scene you want to classify her in.

The solo-written “Death & Life” is nothing short of songwriting mastery, slaying all who listen with open hearts, feeling less like a country roots song, and more like some Eastern poem that unlocks the inalienable truths of life in a breathtaking efficiency of ink strokes on parchment. “Run” emerges as the hit of the record, giving the work some important tempo and texture, excellently written and performed with a superb piano solo and half-time chorus. “Eyes For You” gives the album its country moment, and the warmth of romance.

Fans of the Turnpike Troubadours will recognize the song “Oklahoma Stars” which Wilson co-wrote with Evan Felker, who appears on the record singing harmony. Jack Ingram makes an appearance on a valiant cover of Guy Clark’s “Instant Coffee Blues.” Ingram also co-wrote “Faithful & True.” Other co-writers who appear are Mike Ethan Messick and Brian Wright, but Wilson wrote half of Jumping Over Rocks by herself, including many of the marquee songs.

Maybe the most aching moment on the album comes from “The Being Gone,” which finds Jamie Lin Wilson pondering if all the effort she’s expended for her music has been worth it, including the long weekends away from her family. In no way can Jamie Lin be characterized as an absentee mother. Wilson often brings her kids with her to shows, including a recent tour she did with her newborn son. And though tours do necessitate her leaving town, they also allow her to stay home for long periods. If “The Being Gone” is a question of the value of the sacrifice, and Jumping Over Rocks is the result, then the answer if the effort was worth it is a resounding “yes.”

Jumping Over Rocks is not a default title; it’s perfect. It’s a testament to Jamie Lin Wilson’s dexterity as an artist, and as a human. She is a remover of obstacles, a doer of the demanding. They say you can’t be a full time mother and have a meaningful music career. You can’t give birth to a child and release a new record and hit the road a few weeks later. Try telling that to Jamie Lin Wilson. Just as her music bolsters our spirit, imparts important wisdom, and wets the corner of the eye, Jamie Lin Wilson’s personal story inspires us to pursue our own dreams and persevere, touching us just as much or more than any single note she may sing, or splendid line of verse she may compose. With Jamie Lin Wilson, it’s the full package that leaves you spellbound.

Purchase Jumping Over Rocks from Amazon