“The Waylon Fund” Set Up for Diabetes Research

On February 13, 2002, Waylon Jennings, one of the great country music Outlaws, passed away due to complications from diabetes. Now a Phoenix-based organization called The Translational Genomics Research Institute, or TGen, along with the Waylon Jennings Estate, have partnered to set up The Waylon Fund to support state-of-the-art investigations into the genetic and genomic origins of diabetes a disease that afflicts nearly 26 million Americans.

“What better way to honor the man?” says Dean Ballard, Assistant Director of Development at TGen, and one of the principals behind the idea. “For me, the inspiration really comes from the music first. Being a rock ‘n’ roll kid from Detroit, it was only a matter of time before my friends and I would discover the music of Waylon Jennings and his Outlaw cohorts. So, when the opportunity came to raise funds for diabetes research in honor of one of my heroes, I jumped at the chance. So, The Waylon Fund is a perfect marriage of my love for Waylon’s music and my job as a fund-raiser. It’s really been a dream come true for me to work with Jessi Colter and to actually become friends with her.”

The idea was first hatched in November of 2010, at a Shooter Jennings and Jessi Colter concert at The Rhythm Room in Phoenix that Dean Ballard attended.

“My friend, Bobby Emmett, who at the time played keyboards in Shooter’s band, sent me an email inviting me and my wife down to the show.  I first met Shooter, who’s a real down-to-earth guy. The conversation originally began with him about this idea of raising money for diabetes research in honor of Waylon. But, of course, Jessi had to give her approval, which she did right away and the process began.”

Many entities throughout the music world have already lent their support to the project, including Universal Music Publishing, BMI, The Center for Texas Music History, and lots of local record stores like the Ernest Tubb Record Shops, and Grimey’s in Nashville. There’s also plans in the works for some Waylon Fund benefit concerts. Saving Country Music is honored to throw our support behind the project as well.

Folks can contribute to The Waylon Fund Here, or get more information about it at www.thewaylonfund.org. 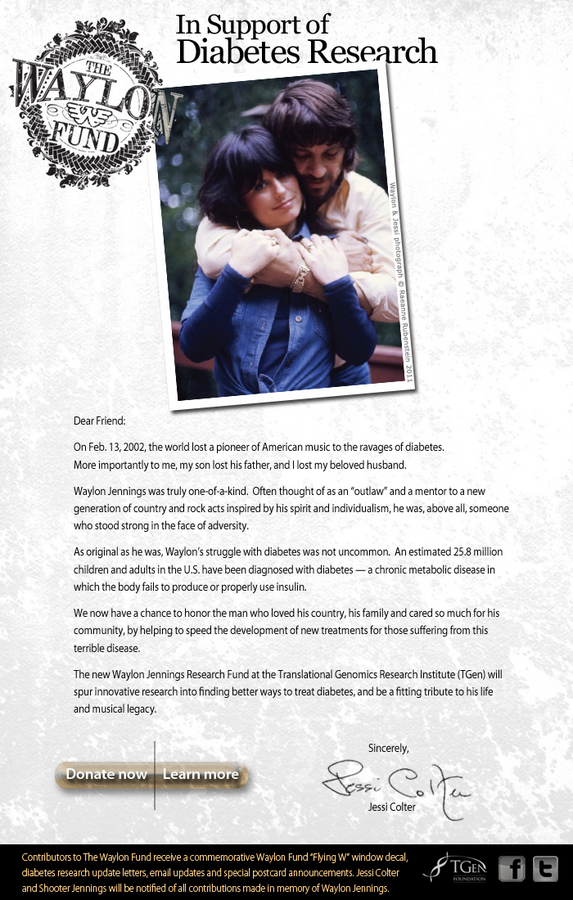 Leave a Reply to Vince Gill to Appear on QVC; Ryan Bingham Gets Psychoanalyzed; Bach on the Banjo - Engine 145 Cancel reply