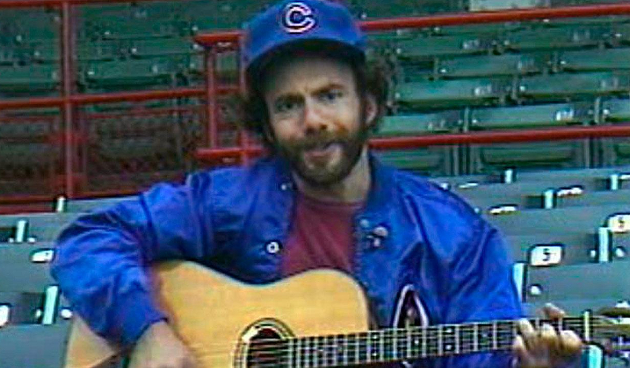 Even if you haven’t heard the name, you’ve most certainly heard the music. And if you’ve ever heard David Allan Coe’s country music classic “You Never Even Called Me By My Name,” you know that Steve Goodman (with an assist from John Prine) is the writer of this “perfect country and Western song.”

But to a Cubs fan, Steve Goodman is something else, and to Steve Goodman, the Cubs were much more than just a baseball team—so much so that when you see shots of Wrigley Field during the 2016 World Series and the Cubs are taking the field for their first appearance in the series in 71 years, a little bit (a very little bit … possibly) of Steve Goodman will be there.

Along with penning “You Never Even Called Me By My Name,” “City of New Orleans” made famous by Arlo Guthrie and Willie Nelson, and other enduring American classics, Steve Goodman wrote a number of songs that are still sung and loved by Chicago Cubs baseball fans to this day, most notably “Go Cubs Go,” which is played and sung by the crowd after every win at Wrigley Field.

Another is “A Dying Cubs Fan’s Last Request,” which chronicles the long suffering reality of Cubs fans and their postseason failings for the last many decades, culminating in a dying Cubs fan enumerating his final requests for his remains to be brought to Wrigley Field.

But this song wasn’t just hyperbole or fiction for Steve Goodman. Along with being a Cubs fan to the core, he was in the process of slowly fading away in life when he wrote it. Goodman was diagnosed with leukemia when he was 20-years-old, and his illness was like an ever-present foreboding in his music underneath is boyish humor and love of life. Goodman was quoted as saying he scheduled his tours “around chemotherapy and the baseball season.” He was an encyclopedia of baseball stats, and never missed a Cubs game when in town.

Steve Goodman never got a chance to see his Cubbies in the World Series. He died in 1984 at the age of 36. And taking instructions from “A Dying Cubs Fan’s Last Request,” plans were laid to scatter Goodman’s ashes on Wrigley Field.

But the Cubs organization would have none of it, and refused to give approval of the scattering of Goodman’s ashes. So Goodman’s remains were kept in safe keeping by Goodman’s business partner Al Bunetta for the next few years until just before Opening Day in 1988. Still without permission, a local songwriter named Harry Waller pulled some strings with Wrigley Field security, and allowed Steve’s younger brother David Goodman in to finally fulfill Steve’s final wishes.

“We stood along the wall, sang the song and let his ashes flow in a beautiful snow,” David Goodman says about the ceremony. “One problem, the wind was blowing in that day and instead of coming to rest on Waveland Avenue, Stevie landed just a little short, (on the) warning track under the 368 sign.”

Another portion of Steve Goodman’s ashes were also spread at the field in Cooperstown, New York where the Baseball Hall of Fame is located.

The Cubs and their fans have waited 71 years to return to the World Series, and even longer since last winning it in 1908. But when they take the field, there will be a little piece of Steve Goodman—Cubs fan, and author of the “perfect country and Western song”—smiling from the warning track under the 368 sign.