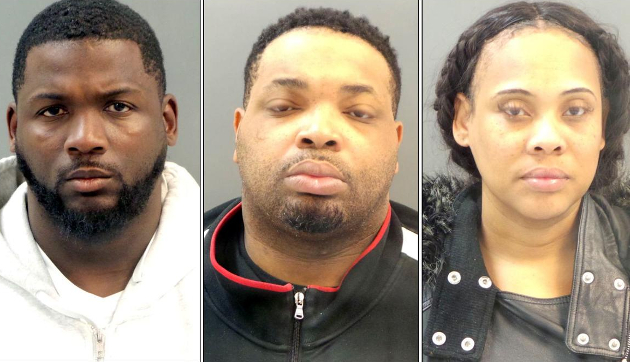 There’s nothing more unnerving for music fans to hear about than a musician having their livelihood potentially taken away at the hands of a petty thief. And there’s nothing more rewarding than to hear when those thieves get caught. For years Houston, TX was known as the Stolen Gear Capital, until a massive sting by the Houston Police Department in early 2016 nabbed criminals tied specifically to personal vehicle thefts, including thefts from multiple musicians. It was Texas music artist Zane Williams who helped expose the criminal network when his gear was stolen. Williams had a tracking device embedded with his gear that led police to the criminals.

Now another notorious hot spot for theft from musicians has conducted a similar operation that has recovered multiple pieces of stolen gear and nabbed the suspects. But in this case, the sting could have national implications after some of the stolen items recovered were discovered to be from crimes outside the city and state. This likely means police wrapped up a theft racket affecting multiple locations, and the musicians living there or traveling through on tour.

2014 is when St. Louis, Missouri first became known as a hotbed for musician thefts, with some bands swearing to never return to the city until the problem was solved. Whether during gigs, staying overnight in the city, or even when bands stopped at local restaurants to get a bite to eat, more than a dozen touring acts reported major break ins in St. Louis in 2014 alone. The indie rock band The Districts, a metal act called Yautja, Texas emo band Mineral, Iowa folk duo Field Division, hip-hop artist Spose, and many others reported major break ins during the time period, and all at different locations throughout the city.

The problem was so bad, a meeting was called between representatives from 10 separate music venues at a local downtown radio station, with a community outreach officer with the St. Louis Metropolitan Police Department present to discuss the epidemic. As the Riverfront Times reported, at the time police believed a single group was behind a majority of the thefts, and they were running down leads in the investigation. Unlike the thefts in Houston that seemed to focus on vehicles pulling trailers, the St. Louis thefts were unique because thieves seemed to focus solely on vans. This put touring bands right in the crosshairs of criminals.

It wasn’t  just the musical equipment being stolen. It was personal items such as laptops, cameras, phones, and even clothing and merch that left bands destitute on the road, and St. Louis with a bad rep among bands. “If you wanna see me perform in the future come to Chicago or something, cuz St. Louis is dead to me,” Spose said after his break in.

In 2015, the problem didn’t let up. The bluegrass band Love Cannon experienced a break in, and one of the most high profile thefts occurred with Ohio’s Two Cow Garage. When the band found some of their gear for sale on eBay in North St. Louis, questions were raised on just how aggressive the local police were being to attempt to solve the crimes, and monitor local merchants for stolen property. This began to put increased pressure on the police department to do something, but 2016 and 2017 saw similar theft incidents. It got to the point where bands and their booking agents we’re rooting acts around St. Louis to avoid any issues.

Now police think they have put a major dent in the problem.

“Our detectives here in the 4th District conducted a 6 to 8 week investigation where they served three search warrants on April 19th,” Captain Renee Kriesmann tells Saving Country Music. “There were three homes that they did the warrants in. There was property in each of the homes. There were lots of different kinds of property, but we have linked some of the recovered property back to a series of bands, including Two Cow Garage. They were able to get their bass guitar back this week. There were probably half a dozen incidents that include band equipment. Some that we’ve either returned or are in the process of returning, and some that we are still trying to identify.”

Three houses full of stolen property totaling some 800 items have necessitated the police department to set up a website with photos where victims of the thefts in the St. Louis area and beyond can claim and recover their items. Many of the items on the police department’s site are of a personal nature, but some still could have come from bands. Some of the band equipment recovered was able to be identified and returned to the rightful owner, and wasn’t photographed for the website.

“We returned some lights to Little Stephen and the Disciples of Soul this weekend, there are some guitar pedals that will be returned to a band called Mantis. We had a violin that was actually stolen from a school parking lot. One piece of equipment we’ve not been able to identify yet is a big cello. We are hopeful we will be able to find the owner,” Captain Renee Kriesmann says.

But the most intriguing part of the St. Louis bust is police were able to recover stolen property taken in crimes outside the state. “We have some property we’ve identified from a band break in from Atlanta, GA.,” says Krisemann. “We have property from a break in as early as 2014. We have property from break in from four different states, including Orange County, Florida, Charlotte, North Carolina, Atlanta, GA, and Chattanooga, TN.”

This means the criminals working in the St. Louis area were either traveling to other locations to participate in break ins, or were dealing in stolen items from crimes in other locales. Either way, the St. Louis sting could put a dent in band break ins and other non-musical thefts from automobiles not just in St. Louis, but in other areas. Meanwhile St. Louis venue owners, musicians, and bands looking to tour through the city are happy to hear that something has been done about the issue.

Lamonte Brown, Jason Holmes, and Khatira Hunt-Rogers are the primary suspects. They have been linked to more than 100 car break ins in the St. Louis area alone, along with thefts in the four other states. As stolen property continues to be recovered and the investigation continues, they could be linked to even more crimes. Lamonte Brown and Jason Holmes each face three counts of property crime and stealing, and Khatira Hunt-Rogers faces one count of stealing. A fourth suspect connected to the crimes, Eric Buckner, is charged with with unlawful possession of a firearm.

“We believe [these criminals] were part of the issue. It’s hard to tell whether or not they were the whole issue. But they certainly had equipment from several of the high profile band car break ins,” says Captain Renee Kriesmann. “We’re happy and excited that we got the equipment back, and that we’re able to reunite it with the bands because we know that’s a hardship for them. We hope that this helps this issue, and that when bands come to St. Louis they can feel safe, and their equipment is going to be safe while they’re here. The officers really stayed focused on this incident. They worked hard on it. They believed it was important to get these guys in custody, and we are hopeful we will have a good outcome for the victims.”

To check the pictures of stolen items looking to be recovered, go to the St. Louis Police Website. Bands who believe their equipment might be part of the bust can also email recoveredproperty@slmpd.org .