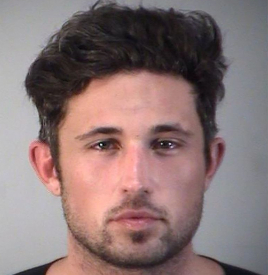 Pop country star Michael Ray—known for songs such as “Think A Little Less” and “Real Men Love Jesus”—was arrested 3 a.m. Wednesday (12-20) morning in Eustis, Florida for DUI and drug possession after he rear ended another vehicle in the drive thru at a local McDonald’s. Ray, who was driving a Jeep Wrangler, says his foot slipped off the brake pedal, hitting the car in front of him.

When police arrived, they noticed his eyes were bloodshot, and proceeded to give the singer a sobriety test. Along with being over the legal limit, police found weed oil in his possession. The 29-year-old whose full name is Michael Ray Roach, was booked into the Lake County jail, and held on $6,000 bond. Ray had recently played a show in Florida on December 16th in Ft. Myers, but is originally from Florida and was born in Eustis.

Michael Ray is considered an up-and-coming mainstream country star signed to Warner Music in Nashville, with a #1 hit “Kiss You in the Morning,” and a #2 hit with “Think A Little Less.” Michael Ray was discovered on the reality singing competition The Next: Fame Is at Your Doorstep, where he was mentored by Big & Rich.

UPDATE: Michael Ray has released a statement about the incident.

“I want to apologize to my fans, family, and my hometown community for placing myself in this situation. I am so very sorry for the disappointment these events have caused everyone. I know it will take time; however, I will do everything I can to rebuild your trust.”