This Blanco Brown & “The Git Up” Business 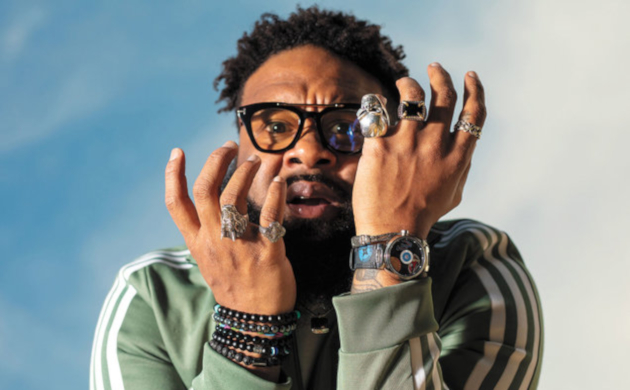 None of this is real ladies and gentlemen. From the fake controversies, to the gaming of the meme culture and social media to make 30-second snippets somehow compete with actual songs on charts, to the paying for streams to create false positives on breakout hits, the malfeasance in the monogenre space with country music as the heel has gotten so out of control and ridiculous, it’s almost not worth paying attention to aside from mapping the egregious infractions against fairness, common sense, and the truth for context, and studying the sociological impact of it all. This will all be judged very, very adversely by history, and the media and music industry are making messes for themselves that future generations will both laugh at, and be tasked to clean up. This is the steroid era in baseball on steroids. Stockpile your asterisks now.

I’ve been avoiding taking about Blanco Brown, and his #1 on top of the Billboard Hot Country Songs chart called “The Git Up” because ultimately it just doesn’t matter. Of course the song is indolent and without depth or value, and it isn’t country aside from containing a few surface level elements that should be considered more as stereotypical insults to country music as opposed to genre markers or authentic expressions.

But these truths are held so self-evident, the song is not even worth shitting on. In fact doing so with some scandalous rant or series of hot air think pieces would have only fueled its ascent to the top of the charts as the completely biased and stone blind media would have used it as fodder to incite faux controversy. I run the risk of this occurring even now simply by broaching the subject, but purposely waited for the song to fall out of its top spot on Billboard’s Hot Country Songs to do so. Blake Shelton, and his mega hit “God’s Country” has now overtaken Blanco Brown after his one week reign. What a massive, career-resurging single “God’s Country” has been for Mr. Old Farts & Jackasses is the real story mainstream country should be focusing on, even if “The Git Up” still sits out there to possibly retake the top spot in the future.

There famous and well-respected lawyer, consultant, and critic Bob Lefsetz said it best himself recently about “The Git Up.

It’s not number one.

There’s all these hosannas about Blanco Brown’s “The Git Up” going #1 on the “Billboard” country chart…BUT THAT’S NOT THE CHART THAT MATTERS!

Country is driven by radio. And “The Git Up” is not in the Mediabase Top 30, which means at best it’s a footnote in Nashville.

Forget the Mediabase Top 30. The best Blanco Brown could manage this week at radio was #56. It wasn’t even sent to radio until last week, after it had already spent a at #1 on the Billboard Hot Country Songs chart—one of the many signifiers about both the idiocy and malfeasance behind this song.

The comparisons to Lil Nas X’s “Old Town Road,” and the hypocrisy of including one song and not the other on the Billboard Hot Country Songs chart is naturally where a discussion leads. But there are some important differences between the two artists. First, if there was any question of whether Lil Nas X was a country artist beyond “Old Town Road,” that matter has been firmly settled by the release of his EP ‘7,’ which doesn’t include anything else resembling country, country trap, or any other country hybrid or offshoot at all. If you want to discuss whether “Old Town Road” should be considered country, that’s one thing. But it’s undeniable that Lil Nas X is not a country artist, with even many of his biggest proponents conceding this point in the face of the EP—which by the way, is dramatically under-performing compared to the continued success of “Old Town Road.” At this point, Lil Nas X is still very much a one hit wonder.

Blanco Brown on the other hand has deeper ties to country, or at least country trap. Blanco is signed to BBR Music Group, or Broken Bow as it’s best known, which is a Nashville-based country label that includes Jason Aldean, Randy Houser, Dustin Lynch, Granger Smith, and others on their roster. You may laugh that these artists are considered country too, but BBR is undoubtedly a big pop country label with multiple imprints. One of the contentions against Lil Nas X being included on country charts is that he purposely signed to a non country label, and ultimately the country charts are there to service country artists and the country industry, neither of which Lil Nas X qualifies for. Also, all indications are that Blanco Brown intends to release more of this “country trap” stuff, as opposed to a one-off effort like “Old Town Road” was. Lil Nas X’s manager admitted early on they only slotted “Old Town Road” as country to avoid the competition in hip-hop, not because they believe it firmly belonged there.

But Blanco Brown and “The Git Up” don’t belong on a country chart either, and it’s not because of “racism,” though this is the only reason much of the media will be able to cite in the incensed nature of today’s echo chamber. Billboard is presenting a double standard by including Blanco Brown and not Lil Nas X on country charts, though this is less about being exclusionary to Lil Nas X, and more about Billboard being completely clueless and without a compass of how it’s managing its charts at the moment. Billboard allowing Lil Nas X to slip in under-the-radar on the country charts is why the entire country music genre is being cited as “racist” in the first place, while somehow Billboard gets away Scott free when they were the sole arbiter of that fateful decision.

But furthermore, just like Bob Lefsetz said above, “The Git Up” has not proven its value in country music whatsoever. Even with his label pushing “The Git Up” to radio hard (the current issue of Billboard’s Country Update trade magazine has an unprecedented six total ads for it), it’s only managed #56 at radio. “Old Town Road” appeared at #50, and #53 on radio on different weeks without being released or promoted as a single at all.

So how did “The Git Up” get to #1 on the Hot Country Songs chart, and only six weeks after it first appeared when it usually takes country artists 20 or more weeks to crest the charts?

Once again, the app Tik-Tok—which was partly to blame for “Old Town Road”—is working for “The Git Up” too, with 130,000 videos featuring the song currently on the app at last count. Even still, this doesn’t account for the incredible amount of streams “The Git Up” is receiving. Amid the success of “Old Town Road,” BBR Music rushed “The Git Up” out to take advantage of the interest in country trap. But it was its preferred placement on massive playlists at Spotify and other platforms that have put the primary charge behind it, introducing the possibility, if not probability of streaming-era payola being involved. No previously-unknown artist with no chart, radio, or sales success has received such favorable country playlist placement as Blanco Brown and “The Git Up,” not even Lil Nas X and “Old Town Road.” The ridiculous amount of print ads BBR music has posted for the song in country radio trade periodicals proves they’re willing to throw mad money behind this track, looking to launch their own version of “Old Town Road.”

Of course the other driver behind this song is this idea that country music needs to be integrated with African Americans. But similar to Lil Nas X, instead of the industry, the media, and fans turning their gaze to the two dozen African American artists that currently exist in the country space and have devoted their lives to the genre—and have songs that are more than just idiotic dance ditties—they once again have allowed a mashup artist to hopscotch the field, shading out actual African American country artists and their contributions as opposed to helping to support them. That said, screaming too much about how Blanco Brown and “The Git Up” don’t belong in country will only fan its flames by inciting controversy, instead of allowing it to die under its own weight, which it eventually will.

As Bob Lefsetz said in his article about Blanco Brown and the tie-ins with “Old Town Road,” “At this late date, we can all agree that [“Old Town Road”] was built by two things…TikTok and a false controversy. This is the kind of thing Shep Gordon did in the seventies, create a false press story around Alice Cooper. But you’d think in the internet era that would be impossible, but not only are there multiple fact lanes in the straight news business, but media too!”

One of the primary reasons “Old Town Road” exploded like it did was due to the media outright lying about it. From Rolling Stone saying it was “country music” that changed its mind about the track instead of Billboard exclusively, to The New York Times, NPR, and a dozen others citing a false Twitter thread by now exposed Twitter troll Shane Morris lying about the racist nature of country music, to the switching of the timeline to say that country music purists had come out against the song before Billboard removed it.

Earlier this month, another article appearing in The Outline states,

It wasn’t until Billy Ray Cyrus, a country music icon and white man, collaborated on Lil Nas’ song that it was deemed “country enough” to be put back on the charts. Watching what happened with Lil Nas X didn’t surprise me; it just reinforced what I knew about being a non-white artist or fan in the genre.

This never happened though. “Old Town Road” was never added back to the country charts. And likely one of the reasons is because if they had added it back after the Billy Ray Cyrus remix, the calls of racism would have been exacerbated, not quashed. The above false presentation of facts proves this. Add the above quote to the reams and reams of falsehoods presented in defense of these country trap songs.

But if you’re worried about what Blanco Brown and “The Git Up” mean for the future of mainstream country, don’t. This is why it was so important to underscore why the Billboard Hot Country Songs chart rendered itself meaningless when another mislabeled track—Bebe Rexha’s “Meant To Be”—set the record for the longest-running #1 on the chart. Similar to Blanco Brown, there’s funny business going on behind-the-scenes when it comes to streaming data, and pulling interest from multiple genres with a song included in a genre-only chart gives it unfair advantage. Put it in pop where it belongs. The case study of Bebe Rexha and “Meant To Be” is another good example that Billboard has no idea what it’s doing. They added “Meant To Be” to the country charts because it was charting on country radio, and a country artist in Florida Georgia Line was involved. If everything was equal, “Old Town Road” probably should have been added back to the Billboard Hot Country Songs chart. But again, Billboard has no idea what they’re doing. All the more reason to render the Hot Country Songs index irrelevant, which it is.

Regardless of all the other factors, just like “Old Town Road,” “The Git Up” is just a bad song with nothing to offer except short-term infectiousness. Where it will end up on country radio and in the greater country music landscape remains to be seen. But bellyaching too much about it at this point is pointless, or could even be counterproductive. Because as Bob Lefsetz said, the Billboard Hot Country Songs chart “is not the chart that matters.”