This story has been updated. Tim McGraw has released a statement (see below).

On Monday (4-15), it was announced that country star Tim McGraw, along with scheduled openers Billy Currington and Chase Bryant would play a concert at the Infinity Theater in Hartford, Connecticut on July 17th, with 100% of the proceeds going to a charity organization called Sandy Hook Promise. Sandy Hook Promise was set up in the aftermath of the school shooting at Sandy Hook Elementary on December 14th, 2012 where 20 children and six adults were shot and killed by 20-year-old Adam Lanza.

Tim McGraw has some personal ties to the Sandy Hook story. Tim’s touring fiddle player Dean Brown is a long-time friend of Mark Barden, whose child was killed in the mass shooting, and who is also one of the founders of Sandy Hook Promise.

“Out of this tragedy a group was formed that made a promise to honor the lives lost and turn it into a moment of transformation,” McGraw said in a formal statement as part of the concert announcement. “Sandy Hook Promise teaches that we can do something to protect our children from gun violence. I want to be a part of that promise as a father and as a friend.”

The announcement of the Tim McGraw benefit concert blended in with all the regular country music news on Monday—a day usually reserved for the distribution of such press releases, until the conservative news outlet Brietbart picked up the story with the headline, Country Stars Tim McGraw, Billy Currington Headlining Gun Control Fundraiser. The story portrayed Sandy Hook Promise as a gun control group, and attributed a quote to Sandy Hook Promise’s Mark Barden saying that he joined the group “pledging to ‘dedicate the rest of his life’ to pursuing gun control.”

The posting of the Brietbart story was like a call to action to many gun control opponents who began attacking McGraw, Billy Currington, and Chase Bryant via social network, including country artist Travis Tritt.

Subsequently a barrage of angry tweets have been sent to both Tim McGraw and Billy Currington, including people accusing the two country artists of hating America and freedom, of being traitors and socialists, and multiple commenters calling for a boycott, including one with the hashtag “#newdixiechicks.” 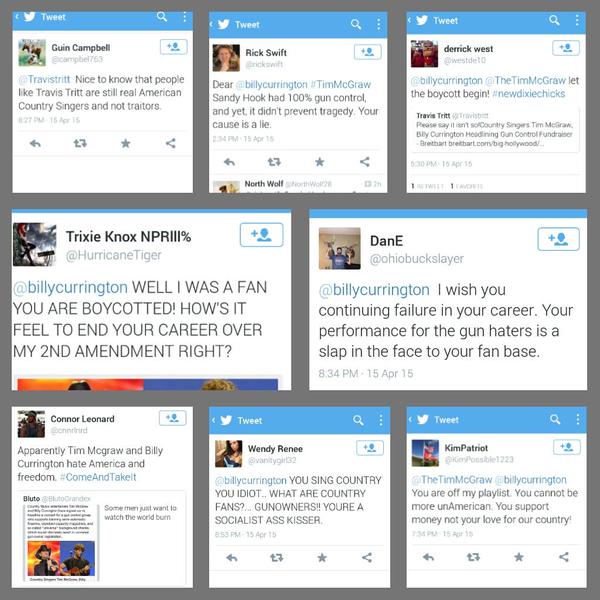 Billy Currington, who was booked as the opener for Tim McGraw on the tour but apparently had no prior knowledge of the charity concert, fired back at one commenter with:

Beyond the question of whether Tim McGraw, or even Billy Currington are alienating their fan bases by playing a charity concert for Sandy Hook Promise, there seems to be lots of questions about the nature of the advocacy Sandy Hook Promise is engaged in. Though Brietbart characterizes them as a “gun control organization,” the mission statement and other information from Sandy Hook Promise appears to be focused more on dealing with the mental health issues surrounding the gun violence phenomenon—an issues that is seen as common ground between groups like Sandy Hook Promise, and gun rights organizations like the NRA.

Sandy Hook Promise is also focused on gun safety—making sure guns are secure so children and individuals with mental health issues do not have access to them. This is where some may characterize the organization as advocating for gun control, but the stance of the organization appears to be more broad based than attempting to pass gun control laws.

The terms “gun safety” and “gun control” could be considered different shades of nomenclature for the same thing in what has become one of the most contentious and divisive issues in the United States. However Brietbart’s characterization of Sandy Hook Promise solely as a gun control organization smacks of polarization and click baiting. The quote attributed to Sandy Hook Promise’s Mark Barden saying that he joined the group “pledging to ‘dedicate the rest of his life’ to pursuing gun control” is a chopped-together and presumptive quote that blurs the actual sentiments of Mr. Barden and Sandy Hook Promise.

The actual quote from MSNBC from Mr. Barden reads,

Mark Barden, whose son Daniel died in the shooting, last year said he had the option to do nothing, or to do something. At the recent event at Helen Mills Theater in Manhattan, he said his family remains “shattered,” but that he will dedicate the rest of his life to reducing gun violence.

“If we can do anything to prevent other families from going through this, and we know we can, we need to get the message out there,” Barden said. “I know that we are on the right track.”

The “dedicate the rest of his life” quote did not come from Mr. Barden, but from MSNBC. Furthermore, the terms “pledging” and “gun control” were never used, but glued together by Brietbart to fan the flames of the divisive gun issue.

Gun control renders law-abiding citizens defenseless, but it does nothing to stop criminals from carrying out their treachery. Because of this, the money McGraw and Currington raise will ultimately succeed in making it harder for law-abiding citizens to acquire and carry the guns they need for self-defense.

However the Mission Statement and other information about the work of Sandy Hook Promise appears to be much more broadly based.

Our sole purpose is to protect children from gun violence by providing and empowering parents and communities with mental wellness and gun safety programs that help identify, intervene and stop at-risk individuals from hurting themselves or others so no other parent experiences the senseless, horrific loss of their child.

Furthermore, in the MSNBC article that Biretbart cites, it clearly states that Sandy Hook Promise is a,

Gun-safety advocacy group that focuses on parents’ love for their kids rather than on politics; that each gun death whether a homicide, suicide, or mass shooting is preventable.

It appears that Sandy Hook Promise is doing what it can to break through the contentiousness of the gun safety issue to find common ground where gun violence, especially perpetrated by people suffering from mental health issues, can be prevented, and not doing so through the passing of laws, but through community organization and awareness.

Saving Country Music reached out to Sandy Hook Promise to clarify if they considered themselves a gun control organization, and were provided this statement:

Sandy Hook Promise supports the 2nd Amendment and is not anti-gun. We recognize an individual’s right to bear arms and support millions of law-abiding citizens in the United States who own firearms. Our primary focus is preventing children from being harmed by gun violence. Our programs encompass things like community-based prevention, supporting social and emotional learning in schools, teaching Mental Health First Aid, teaching kids how to be inclusive at school, and helping people to know the signs of someone who may be in a mental crisis. We also believe in gun safety, which you can see in our program “Keep It Safe and Secure”: http://www.sandyhookpromise.org/keep_it_safe_and_secure.We support policy that helps identify, intervene and stop at-risk individuals from hurting themselves or others. And, we support laws that will help to keep firearms out of the hands of dangerously ill people and criminals, as well as out of the reach of children to prevent unintentional shooting deaths and injuries that have become much too frequent.

Regardless if you want to characterize the work of Sandy Hook Promise as gun control, or you happen to be an advocate for gun control yourself, the thought of repeating the same pattern of behavior that saw The Dixie Chicks black balled from the country music community is something that country music should not wish to repeat, especially in this particular instance where so much grey area exists. Brietbart exploited the contentiousness of the guns rights issue and interjected politics into the country music realm where it’s at the least questionable if it belonged, if not outright inappropriate, especially when the matter is so personal to the people involved.

Americans have the right to bear arms under the 2nd Amendment, but they also have a right to support whatever organizations they so choose under the 1st Amendment. That doesn’t insulate individuals like Tim McGraw or the Dixie Chicks from public outcry if they choose to support an organization or issue that is unpopular amongst a certain demographic of people. But in this particular situation, to characterize Sandy Hook Promise as a “gun control organization,” and Tim McGraw and Billy Currington as gun control advocates just for playing a charity concert, regardless of how you feel about their music, seems like and effort to incite as opposed to inform.

Tim McGraw released a statement through The Washington Post due to the ongoing controversy.

Let me be clear regarding the concert for Sandy Hook given much of the erroneous reporting thus far.  As a gun owner, I support gun ownership. I also believe that with gun ownership comes the responsibility of education and safety most certainly when it relates to what we value most, our children.  I can’t imagine anyone who disagrees with that.

Through a personal connection, I saw first-hand how the Sandy Hook tragedy affected families and I felt their pain. The concert is meant to do something good for a community that is recovering.

The Washington Post also reports that the NRA briefly tweeted about the issue with a link to the Brietbart story, but deleted it shortly after.

Travis Tritt also later tweeted out a link to The Washington Post story with the caption, “Decide for yourselves.”