Tim McGraw’s long battle with independent label Curb Records is now coming near an end. After a court win on Wednesday that allowed McGraw to be able to record new music and pursue another label, Curb has apparently capitulated their previous stance that the music on his album Emotional Traffic is not “topical,” and has decided to finally give the album a release date of January 17th, 2012. 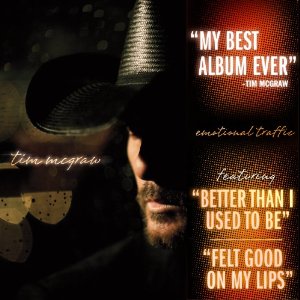 Curb has been holding the album back for over a year, claiming the music was recorded too soon after his previous album, and had been seeking for McGraw to record a new album above the 5 album deal he signed when he joined the label. Less than two hours after the court decision, Curb released a new single from the album called “Better Than I Used To Be.” In a statement, McGraw also iterated he will be releasing a new Christmas song, “Christmas All Over The World,” something he would have been unable to do while still under the heavy constraints of his Curb contract.

I fought very hard for the release of Emotional Traffic, it’s an album full of music of which I am very proud. It’s extremely unfortunate that it wasn’t released earlier this year in conjunction with the Emotional Traffic tour but all I want to do now is focus on the positive and look to the future. I’m really excited about the new music I’m recording. Next week I’m putting”¦ out a holiday song I’ve just recorded called “Christmas All Over The World.” After the first of the year I’ll have a brand new single which I can hardly wait to share with everyone. I am so appreciative of the support I’ve received over the years, and I’m looking forward to this next chapter of my career.

Wednesday’s court ruling was only a preliminary finding in a much larger lawsuit and counter-lawsuit between Curb and McGraw. The full trial to determine if McGraw violated his contract with Curb, and if so, what the penalty will be, is set for July. Curb was under no obligation from the preliminary court ruling to release Emotional Traffic.

“Emotional Traffic” is available for pre-order through Amazon