Tim McGraw’s “Lookin For That Girl” (A Rant)

Trigger Down with Pop Country 127 Comments 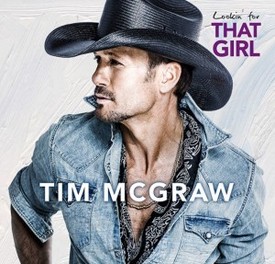 What kind of fresh hell has Tim McGraw unearthed here? Apparently the once high-flying country star has been inadvertently inoculating himself with inebriating bronzer agents from his incessant chemical tan treatments that have now seeped into his blood stream. And combined with an undiagnosed eating disorder that has rendered McGraw’s figure to that of a 55-year-old Venice beach female body builder succumbing to a lifetime of melanoma, Tim has robbed precious nutrients from his gray matter, stupefying him into such an absolute scientifically-infallible vacuum and void of self-awareness that physicists want to employ it to see if it is the ultimate key to tabletop fusion. “Lookin’ For That Girl” isn’t a cry for relevancy, it is a barbaric yawp, a banshee scream, a cacophonous ode to the onset of monoculture and wholesale mediocrity.

The lyrics of “Lookin’ For That Girl” read like a “How To” manual to date rape, which is similar to how this song maliciously violates your earholes with such unwanted and violently barbed penetrations that you find yourself overwhelmed with such desperate loathing for your situation you pray for nothing less than the sweet release of death itself.

Though this song is supposed to be urban and hip, it comes across as the cries of an introverted internet masturbator who never matured past a middle school mentality. Funky Cold Medina? “Hold my dream in her blue jeans, oh my!” are you fucking kidding me? This song makes me hate sex, and is simply a smattering of ultra-stereotypical urbanisms chased by countryisms trying to apologize for itself and accomplish the widest possible splash zone of victimhood with its catchy pap like when a hippo turns his hind quarters towards the herd and scats the hell out of anything and everything aided by a helicoptering tail.

The icing on this urine-drenched urinal cake topped with cigarette butts, spent gum, and used inside-out prophylactics oozing their venereal slurry out on the diarrhea-infested floor is the fact that through the entire drum machine-driven song Tim McGraw is singing through an Auto-tune filter turned to 11. T-Pain, eat your top hat-wearing heart out. I’ve been saying for years now that Tim McGraw is more machine than man, but not even I could have predicted this unmitigated rejection and headlong flight from anything analog or authentic. Hell, why do we even need a human to sing this fucking song? We should just have one of those iRobot floor cleaners sing it. At least that way it would be on hand to swab up the hurl this monstrosity will invariably evoke from enlightened music listener’s disgruntled guts. And like an iRobot incidentally, “Lookin’ For That Girl” will also freak the everliving shit out of your dog.

What made Tim McGraw one of the greatest country music performers for a generation wasn’t his singing necessarily, though he’s a gifted and inspired vocalist without question. It wasn’t his songwriting. And it wasn’t his unique or creative approach to performance. It’s that Tim McGraw could somehow out of the massive crush of song material every artist must sift through, select the very best compositions that would invariably become the soundtrack to so many people’s poignant, life-changing moments. “Don’t Take The Girl,” “Live Like You Were Dying”—these songs inspired millions, and spoke straight to the heart of people looking for meaning and solace in the desperate throes of human emotional frailty. And now we get “Truck Yeah,” and “Lookin’ For That Girl” that makes a two-time Country Music Association Male Vocalist of the Year sound like Stephen Hawking reciting middle school sex ramblings.

The worst country song ever? I’d add the addendum that since there’s really nothing here that is even remotely close to “country”, ingratiating it by calling it the worst “country” song might be inadvertent flattery. And also, we are so early in 2014, this may be an unfortunate signifier of where we’re headed and could be toppled at any moment. But except for these qualifying points, sure, let’s sleep on the idea for a little bit, but I won’t put my dukes up against anyone who would assert that Tim McGraw’s “Lookin’ For That Girl” is the worst song in the history of country music.