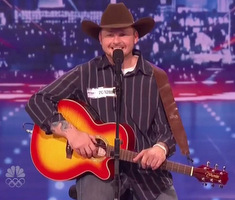 For years corporate country has been commercially exploiting military sentimentality amongst the masses by offering a incessant and mawkish parade of tribute songs and tripe that is shielded from most mainstream criticism because people are afraid of being chastised for not supporting the troops, when in reality many of these “tributes” are even more of an insult to the troops than saying nothing because of the deceptive motivation behind them.

However some of these country music tributes are heartfelt, and many country stars big and small have given of their own time and money, thrown benefit concerts, and have flown all around the world to entertain and give back to the service members who are willing to lay down their own lives.

Unfortunately it was the exploitative version on display this Monday (6-4-12), ironically from a former service member himself.

This week NBC’s reality TV show “America’s Got Talent” showcased a country singer named Tim Poe. Poe claimed to be an 14-year military veteran who had been injured by a rocket propelled grenade in Afghanistan, suffering a broken back and brain damage that gave him stuttering disorder that could only be controlled when he sang.

“There was a guy who came up with a rocket-propelled grenade. I saw it coming down, and by the time I turned and went to jump on top of my guys, I yelled ‘grenade’ and the blast had hit me,” said Poe who got all positive grades from the judges and received a standing ovation after singing Garth Brooks’ “If Tomorrow Never Comes” Monday night.

The problem is, according to numerous reports, Tim Poe’s story is a sham. Rickey.org, a reality show blog first reported that according to a statement from Tim’s superior officer Lt. Col. Kevin Olson, he only served 9 years in the Minnesota National Guard instead of 14, and was not injured in his tour in Afghanistan in 2009, never received a Purple Heart, and never reported an injury. Since then The Associated Press has followed up finding no record of the claimed injury, and his ex-wife in Texas told the New York Post she never heard him stutter and, “There were no combat injuries. I think he developed a ‘feel sorry for me’ stutter.”

NBC filmed a detailed feature on Tim Poe in Austin, TX delving into the details of his military injury story that aired before his performance, but apparently never checked up on his back story. At this point, NBC has offered no comment on the controversy, but Tim Poe swore to TMZ that it is all still true, though has offered no evidence to corroborate his claims.

6-7-12 – TMZ has discovered the combat photo of Tim Poe NBC used in their setup story is not him, but Staff Sgt. Norman Boone of El Paso, TX. The same picture can be seen archived on the Department of Defense website, clearly marked as Boone, and not Tim Poe. “First thing that came to my mind was ‘Why would this lying son of a bitch do this?’ I’m absolutely furious. Been seeing red all day.”

Norman Boone has reached out to the military’s legal department to explore his options. Meanwhile Tim Poe and NBC have offered no further comment.

6-8-12 – It has now been revealed that Tim Poe only served 1 month in Afghanistan before leaving due to an ear infection. He is also back-pedaling on some elements of his story, blaming them on memory loss due to the head injury which still has not been verified by the military, or people close to Poe. He told E Online:

It may not have happened exactly like I said it did. I really do not remember a lot of things since the accident. I would like to take the time to tell the American people how truly sorry I am that they had to endure the incomplete facts. I understand how they feel.

According to Howie Madell, one of the show’s judges, Poe will not be removed from America’s Got Talent, but will be allowed to continue and face an anticipated firing squad for being a liar. “I was blown away that I was totally taken in,” said Mandel. “I’m really angry with the guy.”