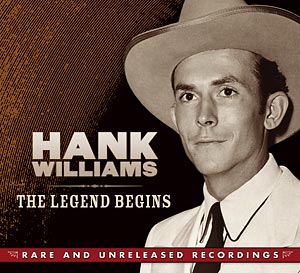 Time Life and the Hank Williams estate have announced the release of another collection of rare recordings from the Hillbilly Shakespeare, Hank Williams: The Legend Begins due out September 13th on a 3-disc set.

The first CD called “Rare & Unreleased” includes the earliest recordings of Hank Williams, from 1938 when he was only 15-year-old, and 4 renditions of classic American songs Williams recorded in 1940: “Freight Train Blues”, “New San Antonio Rose”, “St. Louis Blues”, and “Greenback Dollar”. The second and third CD’s were compiled from Hank’s first syndicated radio show in 1949 called “The Health and Happiness Show” (sponsored by patent medicine Hadacol), and a March of Dimes program from the early 1950’s featuring several songs and “touching monologue” from Williams.

Unlike the Mother’s Best recordings of Hank Williams that circulated for years as bootlegs before they were officially released last year by Time Life, many of the recordings on Hank Williams: The Legend Begins have never been heard before by the public.

“Talk about a discovery!,” exclaims Hank’s daughter, Jett Williams. “The first recording of my dad when he was fifteen was given to me decades ago, and then the 1940 home recordings followed a few years later.  My husband Keith and I finally got up the nerve to get with the best sound people in Nashville to see if we could salvage these extraordinary recordings.  It worked! We did it! What a special treat for music lovers around the world to listen to the talent of an evolving genius.  These recordings are a God send and very special to me and Hank’s fans.”