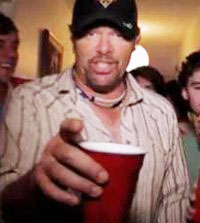 72 hours have passed since Toby Keith delivered a drunken performance at the Klipsch Music Center just outside of Indianapolis on Saturday Night, and angry fans, some of which spent upwards of $300 for tickets, have still yet to receive any apologies or explanation. Though the complicit country music media has completely avoided this story, many major local news outlets in Indianapolis and elsewhere, including CBS WISH Channel 8, WTHR Channel 13, The Indianapolis Star, and KFOR-TV in Toby’s home state of Oklahoma, have been talking about the Toby Keith concert debacle today. Live Nation and the The Klipsch Music Center continue to refuse to comment on the situation, and there still has been no official word from Toby Keith himself.

Jeff Wagner of CBS WISH in Indianapolis did however speak with Toby Keith’s publicist, but not much explanation was given, and there certainly wasn’t an apology. “She told me she’s seen hundreds of his shows, and that he’s never had too much to drink. But she admitted, she didn’t attend this specific concert,” Jeff Wagner says in his report (see below). Later in the report Wagner says that Keith’s publicist told him, “‘All concert goers are entitled to their opinion,’ and that she’s seen a large amount of positive reviews to go along with the negative ones across social media.”

But many others tell a much different story, including Ashley Mayhew, who was one of the concert goers who tweeted out that Live Nation, the Klipsh Music Center, and Toby Keith should at least acknowledge what happened after the concert. “A lot of people have said ‘Well he sings about bars, he sings about drinking, and that’s what he represents.’ But I kind of feel like Jimmy Buffett sings about drinking and partying, but he doesn’t show up to his shows wasted away in Margaritaville … People make mistakes, but this was an entire concert of slurred words, eyes closed, it was just a disappointment.”

If Toby Keith would simply say something like, “Sorry folks, had a little too much to drink Saturday night. I apologize if I ruined anyone’s good time and I promise next time I roll through town I’ll make it up to you,” then this issue would go away. But with Live Nation and Toby Keith refusing to address this situation, fans are feeling even more disrespected than they were on Saturday night. As concert attendee Ashley Mayhew said, “We all make mistakes.” But if Toby Keith refuses to acknowledge his mistakes, and his publicist is saying, “he’s never had too much to drink“—clearly an incorrect assessment of Saturday night—what confidence do fans have that this won’t happen again at another concert, or that Keith’s state-of-mind and drinking habits are in order?

The attendees to Toby Keith’s Klipsch Music Center deserve an apology, if not a refund. And ignoring the problem at this point has only made it worse.