About this time last year, every website and periodical that regularly does these type of things put out their “Best of the Decade” lists. Problem is, they were all wrong. All of them. And not just for country music. For ALL of music, and for movies, TV shows, whatever. Why? No, not because I’m a raging culture snob, because officially the decade does not end until tonight.

It’s true. Google it. A decade is 10 years. There was no 0 AD, there was 1 BC and then 1AD, and if you count up from there, it means THIS is the end of the decade. So when Nostradamus said that in the year of the millennium the man in the blue turban from the house of Sauud would send missiles into The New City and start a great war, he was right! 2001. Except the blue turban part, but that was just some crazy crap to throw us off the scent, because he knew people would focus on the easy to understand qualifiers, because after all, humans are intellectually lazy. Hence all the decade ending lists released prematurely.

But the lovable, huggable Triggerman will not wrong you like that my friends, so I have compiled my own decade list.

Please take into consideration a couple of factors before reading and commenting: 1) This does not include any of the albums for Album of the Year for 2010. You can go ahead and assume that whoever wins that, would be included in this list. And this has been such a great year, that if the decade list was expanded to 14, they would all be there, but since they are so young and their significance uncertain, I think it would be unfair to include them. 2) When I say “Albums of the Decade” I don’t just mean the ones I enjoyed the most. MANY factors play into this, including impact, significance, popularity, accessibility, originality, and influence.

From my 2009 Album of the year Review— “Justin Townes Earle has done an awesome thing with this album; he has figured out a way to unite all the displaced elements that make up the alternative to mainstream Nashville country, while still staying somewhat accessible to the mainstream folks as well. You might even catch the bluegrass folks nodding their head while listening to it. Folkies like it, and there’s a few tunes blues people can get into. This isn’t just the REAL country album of the year, it is the “Alt-country” album of the year and the “Americana” album of the year.”

From my 2008 Album of the Year – “In a time when hippie newgrass pseudo folk bands control the genre, this album is straight forward REAL bluegrass. The .357 String Band has done to bluegrass what Hank III did for country. These are top notch musicians and excellent songwriters in the essence of their craft. This album is also the emergence of Joe Huber as one of the best bluegrass songwriters I’ve heard. I put these boys up with the greats of bluegrass music.”

Sonically, lyrically, and stylistically, this was not a breakthrough album. What is remarkable about it is that an ugly man that writes his own songs and has a fairly traditional sound was able to break through all the protocols of the pop country world and gain airplay, attention, and awards from the country music oligarchy. Maybe Jamey’s success is Music Row’s way of pacifying the traditionalists. Maybe the jokes on them, as Jamey was able to parley the influence of writing a joke song about women’s backsides into a formidable solo career. Either way, and however you feel about his music, it would be unjust, and render this list a sham, if it was not included here. And this is the right pick above the double disk The Guitar Song, whose good tracks are buried under so much chaff that it renders the whole project mild.

That’s right. Don’t rub your eyes. The Dixie Chick have made this list, and this is right where they belong. I’ll spare you my rant about how The Dixie Chicks are honorary Outlaws by fighting for creative control from their label Sony and built up tons of street cred for 8 years as a bluegrass band. And I would never recommend anyone get to excited about their first two big releases beyond the song “Wide Open Spaces” or their “comeback” album Taking The Long Way, which in my opinion was a travesty and Rick Rubin’s worst work to date. But Home is a home run, and a remarkably written and produced album with serious taste and attention to traditionalist values and tones. Tight three part harmonies, and excellent songwriting complimented by beautiful instrumentation makes this one of the best albums of the decade hands down, regardless of what their politics are. In fact maybe this album is too good for the mainstream. Maybe that’s the reason people turned on them, not some innocuous comments about Bush. If you won’t listen to this music or any other because of politics that are not even conveyed in these songs, you’re a fool. Because Home is as good as it gets for females writing, playing, and controlling their own music. Never understood their fashion sense though.

This is it folks, Dale comes out on stage and starts slinging guitars, cutting classics, and speaking the truth. Before Dale was the hometown boy and house band for Austin, he was pissed off and willing to sing about it. “Real Country Song” “Nashville Rash” and “Country My Ass” can all be found here, but this isn’t all pissing and moaning. Songs like “Ain’t That Livin'” showed off Dale’s superlative voice and suave style. This remains the best album in Dale’s collection, and one of the best of the decade.

Without question, BR549 and Wayne “The Train” Hancock created the neo-traditionalist movement in the mid 90’s and will always be the kings of it, but Hank III was the one to carry it into the oughts and introduce it to a brand new crop of fans. After his first album, III was unleashed and able to showcase his own songwriting, heavily influenced by “The Train” and his grandfather, but still all his own. His voice was wickedly pure with a heart wrenching yodel and commanding range. The songwriting was simple, but powerful. This is a masterpiece, and essential title of the neo-traditionalist era.

The style and grace of a queen of country music was never so well refined as it was in this album. Why is country always so quick to throw out the old and roll in the new? Loretta Lynn along with producer Jack White proved the folly of Music Row’s ways with a powerful performance that will stand the test of time and side by side comparisons with any of Loretta’s other works, or Jack’s for that matter. This also put Jack White on the radar as a force in the greater music landscape, much beyond just The White Stripes world.

This is the album that busted out of the burgeoning music scene on lower Broadway in Nashville and showed the world what kind of mayhem could be created by mixing country, blues, and punk music together without compromising taste and soul. This is the one. It is the album which acts as a guidepost to the eclectic, yet intuitive and inter-related mix that you will find being covered on Saving Country Music: honest to goodness appreciation to the roots of American music, with a punk attitude and approach. And Joe Buck played every note on this one my friends.

Good albums are fun to listen to. Great albums change lives. This album, and the others in the American Recordings series, have literally saved people lives, and in many different ways, including Johnny Cash’s. I feel like an idiot sitting here right now trying to convey to you in words the impact of this album, and in all likelihood it is a redundant pursuit, because unless you have been stuck in a mine shaft for the last 8 years, you know first hand how important this album is, even if you don’t consider yourself a connoisseur of country music. This album is Johnny Cash immortalized. Nuff said. I’m sure some will have a different favorite from the American collection, but let this 2nd spot of the decade be filled with whichever Johnny Cash American album you wish. But with the cover of Trent Reznor’s “Hurt” and songs like “Personal Jesus” and “I’m So Lonesome I Could Cry,” this one is hard to top.

We miss you Johnny.

This album isn’t our generations Red Headed Stranger. It isn’t out generation’s Honky Tonk Heroes. It is both. It is the album that both was a novel concept, a breakthrough sonically and lyrically, AND had a massive impact on the business side of music, for artists winning control of their music and inspiring and showing artists how to do it themselves. Look at this picture. They knew what they were doing. They were putting the power of music back into the hands of the artists. 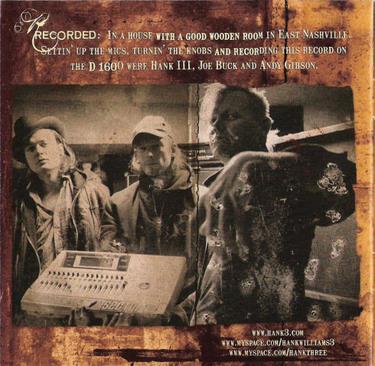 David had slayed Goliath. The deposed son of country music royalty had taken on a major Nashville label, and won, and all while being one of the first to successfully bridge the energy and approach of punk and heavy metal music with traditional country, all while keeping the music solidly country in nature. In future albums III might have gone a little too far, but in this one, the mix was right. And then with the non-linear 2nd disc, he re-wrote the book on album making again. It was the first album to be put out through the CMA with a Parental Advisory sticker. It was the first to ever be recorded outside of a traditional studio setting. Of course only a select few were paying attention, but it broke through many barriers that to this day have changed music in significant ways, sonically AND behind the scenes, and will remain the standard bearer for the hard-edged, drug and obscenity-infused music that would create and underground movement for country music and dominate it sonically for the second half of the decade.

The approach also had wide-ranging impacts outside of underground country and country music in general, to rock music and punk and heavy metal, inspiring thousands of rock kids to put down their electric guitars and AC/DC records, and pick up banjos and Johnny Cash records. The impact on mainstream music may have not been seen, but it was felt, and just like all great albums, it’s legacy will grow and be more appreciated and understood as the future unfolds.