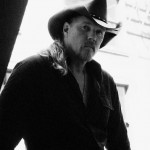 You know how McDonald’s targets children by putting plastic toys in their garbage meals to train their eating habits so when their old and obese they have to lop off infected limbs just to stay alive until they die of a diabetic coma? Well this is the approach Trace Adkins has taken with his dumb song “Brown Chicken Brown Cow.”

When I first roasted this song, a lot of people thought I’d gone too far. That I was tilting at windmills. That I was being some sort of ultra-moralist by pointing out the sexual nature of the song. Some thought it was a stretch to say it was targeted towards kids, and putting clips of children reciting an innocuous joke that had nothing to do with the actual song was a way for me to bend facts to fit my assertion.

Well now my friends, the Trace Adkins camp has shown their complete hand, and without question, it is your kids they are after. And through what vehicle? Sexualized puppets. That’s right. As Trace put it to CNN:

We wanted to do a video that kept the innuendo, but at the same time is ‘G’ rated so kids can watch it, and their parents don’t have to worry about them seeing something–so we’re using puppets.

Now you may watch the video and not see anything that looks too bad, but the CNN story also says, “Over in puppet wardrobe, designers are laying out a doll sized negligee and bra. So clearly something’s goin’ down somewhere–probably in that big red barn.”

That’s right boys and girls, if you’re from the South, or from the West, or live in the country, or enjoy country music, this is what they have done to your culture: relegated it to innuendo and puppet sex.

Unlike Joe Camel of Camel Cigarettes, or Spuds MacKenzie for Bud Light, whose creators were steadfast that they were not targeting children with their products meant for adult consumption, Trace Adkins & Co. are telling us that is exactly who they are targeting, our children, and are going out of their way to make sure it is an appealing environment for their brains to be stunted and their creativity and art appreciation stultified by this unapologetic money-driven filth.

I’m actually for talking to kids at a younger age candidly about sex, about ending the age-old stigmas about discussing sex so kids are better prepared to deal with it when they come of a sexual age. But that is not what this is about. This is about priority. You know how I found this story? I went to CNN.com to verify what I already knew, that the nation’s lead online outlet for news would be completely mum on the passing of Charlie Louvin. And what did I find instead? Sex, and puppets, and Trace Adkins.

This is the state of country music in 2011. They have replaced soul with puppets. Taylor Swift save us all!