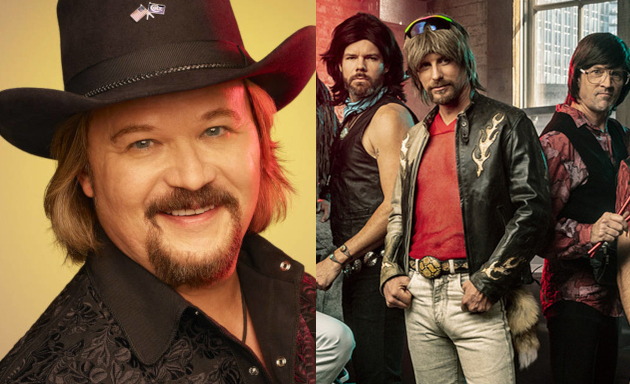 You’ve already been warned that Dierks Bentley’s side project “Hot Country Nights” is getting real in its effort to return actual country music to country music, and after one week it has already had an impact in a tangible way. Travis Tritt has returned to the country radio charts for the first time in 13 years due to the debut single from Hot Country Knights called “Pick Her Up,” even before it officially goes for “adds” on the format. The song prominently features Tritt who is a recognized member of country music’s “Class of ’89,” and is a staunch supporter of country’s roots. He’s also referred to by Hot Country Knights as their “spirit animal.”

“Pick Her Up” debuted at #41 on on the Billboard Country Airplay chart during its first week of play as the 4th most-added song. This marks the first time since 2007 that Travis Tritt has been featured on a charting radio single when his song “You Never Take Me Dancing” hit #27. That’s quite a feat seeing how the Hot Country Knights single isn’t officially impacting country radio until February 3rd. Nonetheless, eager DJ’s are getting in with it early, giving us a very good sign that “Pick Her Up” could be a big hit.

Part of of the reason for Travis Tritt’s absence on country radio is his own fault, and not stylistic changes at country radio. It’s been since 2007 and Tritt’s album The Storm that he’s released new studio music. This puts Tritt past Jamey Johnson for being due for a new album. Some of this is probably due to Tritt not seeing the point of putting out new album with the direction mainstream country music has taken, but “Pick Her Up” could put Tritt back on the radar of many, and put a jolt into his own creative output.

“Pick Her Up” is off to a good start, but it’s where it finishes that will really tell the tale. UMG Nashville is pulling out all the stops though, putting a full page ad this week in Country Aircheck with the tag line, “Actual Real Country Music!” and bullet points like, “The Hot Country Knights are the 2nd or 3rd best country band out of Murfreesboro, TN.”

Where the comedy ends and the seriousness begins still remains to be seen. But if steel guitar and fiddle find their way back into the country format, it can’t be a bad thing. Speaking of, Jon Pardi’s “Heartache Medication” is likely to make its way to #1 on country radio next week as well. All of a sudden, the future prospects for country on the radio are not looking so bleak.