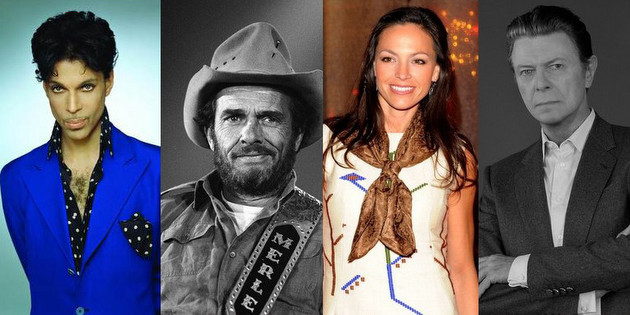 Usually it’s only once or twice a year that music media is faced with the dilemma of how to adequately and respectfully cover the passing of a high profile music celebrity. In 2016, it has been more like once or twice a month. In fact the frequency of seismic music deaths has been a story unto itself. And with each tragedy, where the line is between honoring a music legend and delivering important information to the public, and exploiting the situation for web traffic continues to become harder to define.

As soon as a major music celebrity passes away, there are certain media formulas that are immediately implemented by major news and entertainment outlets. First come the obituaries. Some major newspapers that employ professional obituary writers will already have drafts in place for celebrities whenever the news breaks, especially if it’s an older artist, or one known to be ailing. But many outlets don’t have such foresight, and when a death is unexpected, the result is sometimes hastily-written and factually-challenged obits posted as quickly as possible to take advantage of the viral nature a death story takes on.

Then you invariably have the onslaught of reposts of old, archival stories about the music celebrity that are pushed out via social network to hopefully capture some of the interest in the death. Next you have the stories that aggregate the reactions of other celebrities on social network into one place; the “Prince Dies / The Internet Reacts” stories. These are easy to slap together by embedding posts from Twitter and other social network feeds without having to actually reach out to the individuals themselves to get a perspective that is more insightful and informative than 140 characters. You don’t need a professional journalist to put such stories together; put an intern on the case since they take little to no writing skills or in-depth research.

Similarly, as other artists pay tribute to the fallen star by performing cover versions of their songs or saying something poignant to people at a concert, a series of articles is composed to take advantage of this extension of the death story by embedding videos from YouTube into articles and passing it off as original content. But the dilemma here for news outlets is if this is really news? Is a grainy, figgity cell phone video taken from 20 rows back uploaded to YouTube by a fan really the basis for a feature article? Or is it something that would be just as easy to push out with a simple link to the video through a media outlet’s social network channels? Sometimes there’s a back story that needs to be told, and an article is necessary. Many times there isn’t, and writers are forced to regurgitate facts or already-known details to flesh out such posts.

Right now online media is under siege like never before. More and more, internet users are relying on social networks to curate their internet experience as opposed to the landing pages of major news outlets and bookmarks of favorite websites. Facebook is especially making major gains, putting standalone websites at the risk of extinction similarly to the implosion of print media during the advent of the internet. Now that Facebook, and even Google are strongly developing “Instant Articles” meant to be placed right into social network feeds, this dilemma is soon to be exacerbated. But why would internet users seek alternatives to their social network feeds from legacy media brands when much of what outside media is doing is regurgitating the content that they already see on Facebook and Twitter? Crafting thoughtful, well-researched, and involved content is how online media can remain relevant in an increasingly Facebook-dominated landscape.

But when it comes to celebrity music deaths, it presents a whole different set of problems for publishers. It seems certain grieving music fans believe media outlets are either crossing bounds and not respecting the sanctity of the individual when it comes to the death, or not doing enough to show respects. This is not an envious position for editors and website owners to be in, and there are no easy answers on where the boundaries are, or the best way to handles these situations. It’s a judgement call by the journalists, and the grieving fans.

Just like with tweets and fan videos in the aftermath of a celebrity death, perhaps the best question to ask is if the information can be found somewhere else, and is it better to just link to the original source? For example, in the case of country artist Joey Feek of the duo Joey + Rory, who passed away earlier in 2016 after a long battle with Cancer, her husband Rory Feek was keeping incredible detail on her failing heath and final days for fans who chose to follow along. Rory Feek showed a professional aptitude for using detail, flow, and story arc in his writing that many journalists could have learned from, and all while suffering himself through the grieving process of losing his wife.

Nothing more was needed to be said about the death of Joey Feek than what her husband was writing. But this didn’t stop music and celebrity media from picking up every heartbreaking detail and regurgitating Rory Feek’s words for their own publications, and usually in a much less-refined style. No media outlet was ever going to be a better source for information than Rory. But as some readers were lapping the Joey Feek coverage up due to the emotional nature of it, other readers were attacking the outlets for being exploitative. The reasons the posts were being published is because they were popular, and because peer pressure in the media marketplace made outlets feel like they had to keep up with the story, or fall behind their competition.

Of course the case of Rory and Joey Feek was an exceptional one. When country legend Merle Haggard was ailing and experiencing his final days, the media was left completely in the dark. Merle Haggard’s funeral was promoted as a “private” affair. This seemed to be a request to the media to leave the details to those involved, but funeral information made it out through popular media anyway. Meanwhile, if you didn’t pay enough attention to Merle Haggard’s passing, you may be criticized for not being respectful enough to a music legend.

Complicating matters further is the new arrival of viral content farms who work primarily through Facebook since their content is so low brow and misleading that Google and other search engines would never populate it in search results, and no other media outlets would ever link to it. Sites like NewsBake and SocialMediaMorning don’t just exploit celebrity music deaths, they exploit everyday health news from stars with clickbait titles fooling Facebook users into thinking their favorite celebrities are on death’s door. This isn’t just part of what these sites do, it is their sole purpose to rack up clicks through exploitation of concerned fans. This has put other fans on high alert for anyone they believe might be using a tragedy to their financial benefit.

The same goes for corporate brands and businesses who want to pay tribute to fallen music stars. When Prince passed away recently, certain institutions changed their logos to incorporate the Prince symbol, or colored their logos or buildings or backdrops purple in tribute. Whether this financially benefited these companies, or they just wanted to pay their respects as grieving fans themselves, is in the eye of the beholder. Some of these tributes were well-received, but others were responded to with anger, especially since Prince was pretty outspoken against the corporate control of music.

“Everyone is climbing on the death wagon, and that’s understandable because that’s where the audience is, that’s where the clicks are,” says Patrick Hanlon, founder and CEO of the global branding company Thinktopia to The Hollywood Reporter. “But it’s disingenuous, and it’s borrowed interest. Cheerios and Prince shared the same city but not the same values. These companies are borrowing from the shared passions, good will and shared sorrow of Prince’s brand community. And after the second and third and fourth corporation, don’t think that the grieving community doesn’t see through that.”

The passing of a beloved music artist is good for the media. And trying to get readers to a website is the job of every media outlet. The media is a business just like any other, and if they can’t create interest in their content, they will pass away as well. This, and the difficulties of knowing where the lines are between showing tribute and taking advantage of the situation, is something mourning fans also must take into consideration before sending barbed messages or unsubscribing from websites because someone thinks they covered a celebrity death all wrong.

But the media has a responsibility to the public too, and a responsibility to the fallen artist and their family to make tough decisions about where the lines are, how to show respect and inform the public, but make sure not to make a tragedy into a token moment to exploit. And many of these decisions must be made on the fly, and in the new media environment where the rules of the road as still being determined.