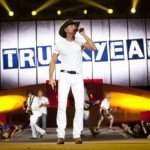 An outright street fight of mammoth proportions is breaking out on Music Row in Nashville, the legendary stretch of asphalt where many of country music’s major labels hold their headquarters. The brawl is pitting two of Music Row’s heaviest hitters against each other, Mike Curb of Curb Records, representing the old guard and the heavy-handed restrictive way of handling artists, and the up-and-comer, Scott Borchetta, the Country Music Anti-Christ.

The two Nashville-based record labels, located mere blocks from each other are lobbing competing Tim McGraw radio singles at each other like grenades, a very unique and virtually unheard of scenario in music. McGraw, who was signed to Curb for some 20 years, signed with Borchetta’s Big Machine label last month. At the press conference announcing the new McGraw signing, Borchetta hinted competing singles may be released, and today made it official when Big Machine announced that they will release “Truck Yeah” from McGraw on Tuesday, July 3rd.

Curb, who had been holding back McGraw’s last album Emotional Traffic in hopes to indefinitely extend his contract, immediately began releasing singles from the album as soon as they lost a key court battle that allowed McGraw to record with another label. McGraw has a current single from Emotional Traffic “Right Back Atcha Babe” out right now, climbing the charts. Now the two singles, the two labels, and the two men, Borchetta and Curb, will be competing for the attention of the general public.

This development is very significant for Music Row, a usually tight knit fraternity of music business colleagues. Now you have arguably the two most significant Music Row citizens duking it out. Many major labels have satellite offices on Music Row, but are based in other cities like New York, LA, or London. Curb Records and Big Machine are the two major Nashville-based, independently-owned labels that call Music Row home.

“Truck Yeah” also marks a significant change in Tim McGraw’s style. Aside from his first major single, the controversial “Indian Outlaw”, McGraw has been known for more serious material, sometimes labeled as the adult contemporary star of country music. “Truck Yeah” with it’s heavy guitar smacks of the arena rock, laundry list songs that have become so popular over the last couple of years in mainstream country music.

Who will win this battle we will have to see. But the most significant development to take away from this is that Music Row now is not only battling the forces from the outside–illegal downloaders, traditionalists mad at the direction of country, artists wanting more freedom, etc.–it is now fighting itself.