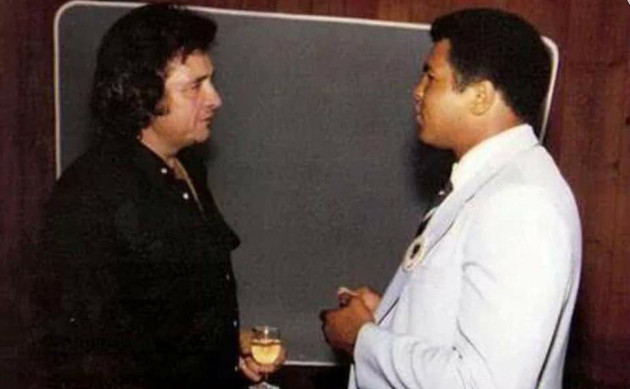 Muhammad Ali, who passed away on Friday, June 3rd, is known for many things, though music is not the first worldly pursuit you would associate with the World Champion boxer and humanitarian. But he was close friends with people all over the music world, including in country music, and especially with the four men that some consider the Mount Rushmore of country music, otherwise known as the supergroup The Highwaymen comprised of Willie Nelson, Waylon Jennings, Kris Kristofferson, and Johnny Cash.

All four men were close with Ali, and were introduced to him through Kris Kristofferson, who was a boxer himself, and a friend of Ali’s for many years.

“He was absolutely the same person on stage that he was off,” Kris Kristofferson told Rockcellar Mag in 2013. “He was a beautiful human being and a really sweet man, and all his life he was doing beautiful things for people. And I admire him not just for his fighting, but for the way he’s handled his incapacity as he’s never felt sorry for himself. I remember when Waylon Jennings wanted to meet him, and Waylon wasn’t impressed by anybody. But Waylon was impressed with Ali, and they also became good friends.”

Ali and Waylon became such good friends over the years, Ali was in attendance for the christening of Waylon’s son Shooter Jennings, and Ali showered Waylon with gifts over the years.

“I thought he was too smart-ass for his own good when I first heard of him,” Waylon said in his autobiography with Lenny Kaye. “But after I realized what he was doing, he left-hooked me quick. Muhammad talked about himself with a grand sense of humor, but it helped that he was probably the most gracefully flamboyant boxer of our lifetime.”

Willie Nelson was also a friend of Muhammad Ali. “A year or so ago, he gave me a pair of his boxing gloves,” Willie told Uncut in 2015. “I met him a few years back. I’ve always been a fan, all the way back to when he was Cassius Clay. I was really glad to get to meet him. He came on my bus one time. I’ve got a punch bag in the back of the bus and I got him back there punching my bag. I was thrilled to be able to know him.”

When it came to the fourth member of The Highwaymen, the friendship manifested into music. When Johnny Cash met Muhammad Ali, the boxer presented Cash with a poem called “Truth.” Cash valued the poem so much, he kept it locked away in a vault for years, but not before setting it to music in a piano tune, and recording it in the studio.

The song, and the story behind it are regularly mixed up with another Johnny Cash song called “What Is Truth” which carries a strong, anti-war message that is easy to associate with Muhammad Ali. “What Is Truth” was released in 1970, eventually peaking at #3 on the country charts. But the Ali-inspired “Truth” was never released, until it found its way onto the compilation Johnny Cash: Bootleg Vol. IV: The Soul of Truth released in 2012. The song was likely recorded in January or May of 1979, with Jack Clement and Jack Routh acting as producers. Johnny Cash envisioned it as a Gospel tune.

Johnny always believed that Muhammad Ali had written “Truth” for him, and probably died believing such. But when researching for the 2012 Bootleg Vol. IV compilation, producer Gregg Geller discovered that “Truth” was actually written by a teacher of universal Sufism named Hazrat Inayat Khan who died in 1927.

Nonetheless, Muhammad Ali’s gift to Johnny Cash resulted in a beautiful and inspired piece of Gospel music from Cash, and exemplifies just how far the touch and impact of Muhammad Ali went throughout the country and world.