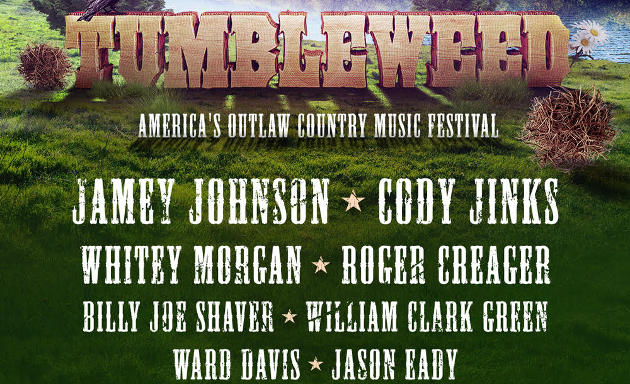 Not since maybe Willie Nelson’s Fourth of July Picnic in 2015 have we seen this beefy of an assemblage of true, hard-driving country music talent compiled in one place for the public’s listening edification, and this may even top that event. It’s called the Tumbleweed Festival, and with this lineup, they live up to the self-appointed title of “America’s Outlaw Country Music Festival.”

You’ve got Jamey Johnson, Cody Jinks, and Whitey Morgan, who just might be the 1, 1A, and 1B of authentic country music currently living and breathing at the moment. Then you have the essential ingredient of a true country legend in Billy Joe Shaver, and one that isn’t presented as a museum piece, but a guy that comes out swinging (literally!) when he puts on a live show. Then you have an essential selection from the Texas country scene with William Clark Green, Jason Eady, and Roger Creager, as well of three of the hottest up-and-coming names in true country at the moment, Paul Cauthen, Colter Wall, and Ward Davis. Round it out with Mickey Lamantia and Damien Gunn, and this lineup is so good it’s stupid.

It’s all set to go down at La Benite Park right on the Missouri River in Sugar Creek, MO, just outside of Kansas City on July 28th and 29th, 2017. Camping is available on site as well, and there will also be fishing, guided canoe river trips, and helicopter rides as part of the festivities.

“Tumbleweed creates an unbelievable escape from reality, where everyone is your best friendand relationships are established for life,” says Tumbleweed organizer Doug Bordegon. “The camping experience is like none other. Campers at Tumbleweed relax and party along the Missouri River in one of the most spectacular settings in the country. Attendees have coined the campgrounds ‘TentCity’ where thousands of attendees enjoy the best of country music, with campsites just feet away. There isn’t a better place to appreciate life with your friends and family; Tumbleweed is truly a spectacular experience.”

Plus there will be additional performers and up-and-coming talent for the lineup and the fest’s late night stage to be announced soon. “Tumbleweed has actively supported female country artists in the past and feels strongly about the importance of a balanced gender presence in all forms of art, including country music. We made many attempts to secure outstanding female musicians for Tumbleweed 2017 and can assure our fans that future artists announcements for this year’s festival will include highly respected female musicians.”

Seriously, if you can get to the Kansas City area in late July, don’t screw this up. Kids under 10 are free. Two-day passes start at a reasonable $69 and can be purchased at tumbleweedcountry.com. 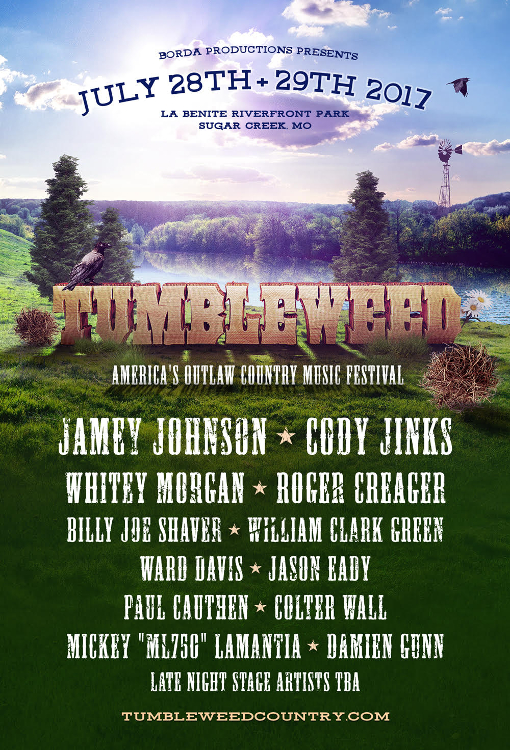