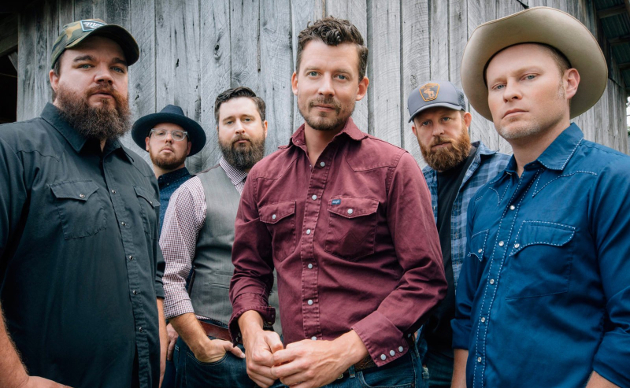 The boys from Tahlequah, Oklahoma known as the Turnpike Troubadours traveled down to Houston on Saturday (3-2) to take advantage of their first ever berth on the biggest stage in Texas—the star-shaped one in the center of the NRG Stadium as part of the annual Rodeo Houston production. A big opportunity for any band, it’s especially big for Turnpike who unlike most of the other Rodeo Houston performers such as Luke Bryan, Tim McGraw, and Kane Brown, aren’t signed to a major label, and don’t receive any mainstream radio play.

Nonetheless the seats were packed for their set, drawing 66,715 to the stadium Saturday night, and they entertained the crowd with a straightforward Texas/Red Dirt country show, free of frills or fancy production like many of the other performers, but just as entertaining for many in attendance. “Thank you for being so nice to us, ladies and gentlemen,” frontman Evan Felker said in one of the few moments of banter during the evening.

The Turnpike Troubadours wasted no time launching into their two most signature songs right off the bat, “Every Girl” and “7 & 7.” The 15-song set was one straightforward performance after another, finishing with “Bossier City” and their well-known rendition of the John Hartford classic, “Long Hot Summer Day.”

How does 66,715 stack up against previous attendance numbers? Native Texan Kacey Musgraves, who just won the Grammy for Album of the Year and opened the rodeo season this year, drew 53,031 on a Monday night. Superstar Cardi B, who played the night before, set an all-time Rodeo Houston attendance record with 75,580. Comparing the numbers with other independent artists who’ve taken the Rodeo Houston stage, Aaron Watson drew 51,000 in 2017, and Cody Johnson drew 60,011 that same year. So overall, the Rodeo and the Turnpike Troubadours have to be happy with how many folks showed up.

Now Turnpike is off to the Midwest where they will play shows at the Blue Gate Theatre and The Bluebird in Indiana on March 7th and 8th, and then a show in The Caverns in Tennessee with American Aquarium on March 9th.