Kentucky-born resurgent country artist and fast-rising star Tyler Childers is now a major label country artist. As first reported by Saving Country Music on Wednesday (5-16), and made official during a video premier early Thursday morning, Tyler Childers is the newest signee to RCA Records, a division of Sony. The video premiered was for the song “House Fire” (see below), which had also populated through popular music sites. A new album was also announced called Country Squire coming August 2nd. It will be released through Tyler’s own imprint on RCA called Hickman Holler Records.

Those worried that Tyler Childers signing to a major label will mean a major shift in his traditional-oriented, strong Kentucky songwriting style will be sorely disappointed. Similar to the deal struck by his producer and mentor Sturgill Simpson, only with guarantees of creative freedom and a healthy signing bonus was Childers willing to sign his future to a major music outfit. Unlike Sturgill, at least for the moment, Childers has kept the strong roots influence in his music. Sturgill has returned to produce Tyler Childers for the upcoming RCA release. Just like his previous record, it was recorded at the Butcher Shoppe in Nashville, and features musicians Stuart Duncan, Miles Miller, and Russ Pahl.

Tyler Childers was previously singed with Thirty Tigers, which will continue to service his back catalog of his breakout album Purgatory from 2017, as well as the re-release of his Live on Red Barn Radio albums.

The 27-year-old from Lawrence County, Kentucky started playing music when he was 13, and learned how to sing in the church choir. After graduating from Paintsville High School, Childers attended a few semesters at a community college while pursuing a music career, releasing his first record at 19 called Bottles and Bibles. Appearing throughout Kentucky and West Virginia, Childers became a regional phenomenon, and was given a major boost when the drummer for Sturgill Simpson, Miles Miller, introduced the two. Soon Childers was signed to Thirty Tigers, and became one of the fastest-rising artists in country music. Childers regularly sells out live appearances, and will be headlining numerous festivals in 2019. 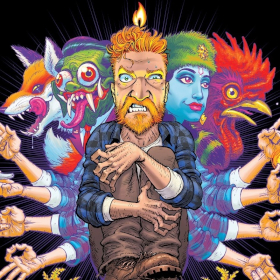 Tyler has also announced a new tour leg as part of an upcoming “Country Squier Run” tour October through December. The nine tracks from the new album will include many long-time Tyler Childers fans have heard live or seen in YouTube videos previously, including “House Fire.” Casey Campbell from Buffalo Wabs and the Price Hill Hustle appears in the “House Fire” video.

As you may have guessed, we have some big news coming out today. We’re happy to announce that Hickman Holler Records is teaming up with RCA Records to release my new album, Country Squire. Link in bio pic.twitter.com/PYnxlkJZXT