Tyler Childers Snaps Back at Detractors with T-Shirt 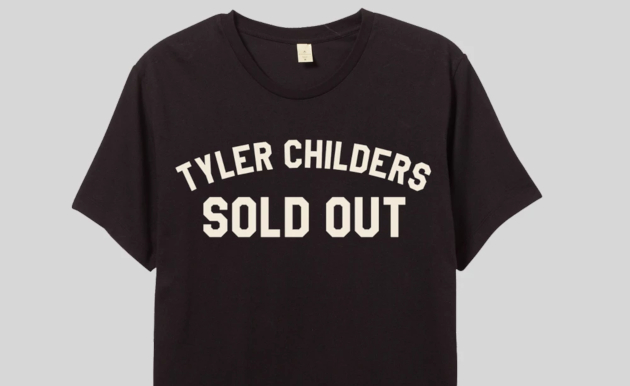 One of the biggest adversities to a grassroots artist is success. As Chris Stapleton once said after he’d risen out of obscurity, “I have completely no street cred anymore.” Though it comes with a healthy dose of new fans, recognition, and financial support for your music, some of the independent fans that rooted for you when you were the underdog all of a sudden decide you’ve sold out and gone corporate, even if nothing has materially changed in the approach to your music or career.

Tyler Childers is the perfect example of this. He released his latest album Country Squire earlier this year, and it’s fair to consider it one of the best country records released in 2019. Yet a small but boisterous contingent of former Tyler Childers fans love to grouse on about how he changed significantly once he signed to Sony’s RCA label, even though all the songs on the record are ones Tyler had been performing live before any major label was involved, and he recorded Country Squire before he signed his deal. Approaching RCA with an album in hand was one of the ways Childers assured his creative autonomy, along with the record being released via his own imprint, Hickman Holler Records.

Then of course there’s the chorus of voices who hate anything that involves Sturgill Simpson these days, and they’ll swear that Sturgill as producer ruined Tyler Childers and Country Squire, even though many were singing Sturgill’s praises when he produced Tyler’s breakout record Purgatory from 2017. It’s fair to wonder what Country Squire or Purgatory might have sounded like if Tyler had used his backing band The Foodstamps in the studio as opposed to musicians selected by Sturgill, or perhaps other production decisions are fair to second guess. But it’s some of Simpson’s political outbursts, and the fact he released a non country album himself in Sound & Fury that have put Sturgill on the wrong side of some people, not any fundamental problems with Country Squire.

Tyler Childers will be opening for Sturgill Simpson on the upcoming “A Good Look’n Tour” in 2020, and one of the T-shirts that might be at the Tyler Childers merch stand will be his newish “Tyler Childers Sold Out” shirt. A playful jab at the folks shaming Childers for having the audacity to achieve a sustainable level of success, the shirt features all of the tour dates Tyler Childers has sold out on the back, which is enough you have to get a magnifying glass out to read the font. The run of sold out Childers shows is one of the reasons the upcoming tour with Sturgill Simpson is being booked in arenas instead of clubs and theaters.

Of course there can a little frustration or resentment when an artist you first saw with 30 other people in some bar blows up to arena-level status. But instead of being bitter, understand that their success is your success too. As an independent artist, it wasn’t just their talent, it was your grassroots support that helped make their career possible, and allowed them to be able to record and release music their way by attending those intimate shows, and purchasing merch like a Tyler Childers T-shirt. Now that they’ve reached the top, don’t be afraid to share that joy of their music with others.

No doubt there are some artists that after finding even a small amount of success, it’s sent right to their heads. But Tyler Childers seems like the kind of guy that understands this concern fundamentally. This is why he hasn’t moved to Nashville, and instead returns to his native dirt in Kentucky when he goes off tour to keep himself grounded and connected to the influences of the music. Oh and by the way, Purgatory released on Thirty Tigers has still sold better than Tyler’s “sellout” record Country Squire. Same goes for Sturgill’s Metamodern Sounds in Country Music compared to his major label releases.

Did Tyler Childers “Sell Out”? Your damn right he did. He sold out so many shows that opportunities opened up for him that he chose to take advantage of, and did so without compromising his integrity, or the authenticity behind his music.

And if you want a “Tyler Childers Sold Out” T-shirt, they can be purchased online.