For years the top tier of country music coverage was simply a cloistered and closed-minded exercise in recycling the same already-established names in puff pieces proselytizing the virtues of pop country and very little else. As independent music as a whole continues to gain market share from the mainstream, it’s becoming more and more pertinent for big news outlets to pay attention to the rising tide of independent music, and the renewed interest in legends of the genre. CMT created CMT Edge to cover Americana, bluegrass, legacy artists and other independent acts, and other outlets have stepped up their independent coverage in one capacity or another. But that one mainstream outlet that really gives equal footing to artists regardless if they have the big money of a major label behind them has remained elusive…at least in country music’s traditional stomping ground of the United States. 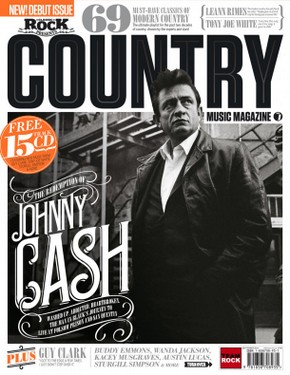 Once again the Europeans out class their cross Atlantic counterparts with the newly-launched Country Music Magazine from Team Rock—the same people who’ve brought the UK the long-running and widely-distributed Classic Rock Magazine. Despite the generic name, this magazine is anything but, with 132 extra wide (8 ½” x 12″) glossy full-color photo-showcasing pages, accompanied by a free, 15-track CD with music from the likes of Sturgill Simpson and Guy Clark.

Amongst its content is a full 60 pages of in-depth features on folks like Johnny Cash, Tony Joe White, Kacey Musgraves, Sturgill Simpson, steel guitar player Buddy Emmons, Kris Kristofferson, Guy Clark, LeAnn Rimes, Steve Martin, Wanda Jackson, and many more. There’s also a rundown of “69 Must-Have Classics of Modern Country” and smaller features on Fifth on the Floor, Austin Lucas, Jack Clement, and others. The last 30 pages of the mag are dedicated to dozens of album reviews and a buyers guide of releases and re-issues complete with ratings from a wide swath of the country music world. Even the few, unobtrusive ads in the mag are for cool country folks like Daniel Romano and Laura Cantrell. Both the current and archival photos for the respective artists are astounding in their full page context.

When I first heard about this magazine and saw the lineup of who they were planning to feature, I was interested to see how it would all play out once it went to print. It sounded almost too good to be true, but Country Music Magazine seems to be determined to do right by the country music name.

And to be fair, the mag doesn’t ignore bigger, mainstream artists. There’s album reviews for Florida-Georgia Line, Blake Shelton, and Brad Paisley because they’re part of the country music community too. But the reviews for these big names are right beside reviews for people like Bill Kirchen and Patty Griffin. And it can’t be stressed enough how much content is here. It’s a magazine you can’t put down, but seems to take forever to get through because past every page turn is something you want to read, and read again.

About the only base that maybe wasn’t thoroughly touched was the Texas/Red Dirt side of country, but from mainstream to Americana and independent country, they have it all covered. Another concern would be that they set the bar so high with this inaugural issue, it will be interesting to see if they can match it at quarterly intervals. Nonetheless, this is the country music magazine we’ve all be waiting for.

Country Music Magazine is edited by Ed Mitchell, with contributions by Grant Moon, Emma Wicks, and Max Bell. Comes shipped in an outer protective cover that includes the magazine and free CD. The magazine costs £7.99 in the UK, £9.99, which is roughly $15.00 US to have it shipped to the States.