Unknown Hinson Is Back From The Dead With New Tour 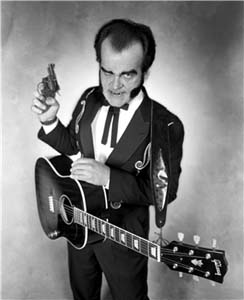 That’s right ladies and gentlemen, Unknown Hinson, aka the King of Country and Western Troubadours, aka the voice of Early on the Cartoon Network’s Squidbillies, is back, and is embarking on a big tour this fall.

On November 15th of 2012, Unknown Hinson’s internet peeps posted that he had played his last tour dates in public, “period,” cancelling a few previously-booked shows and blaming the rising price of touring for having to call it quits after 18 years. But apparently the hillbilly vampire has been hit yet again with the traveling Jones, and has posted 14 new tour dates so far with “MUCH more to come,” and signed,

“Thank you, my friends for your support. I hope to see you all soon. Sincerely, Stuart Daniel Baker ‘UNKNOWN HINSON'”

Unknown Hinson is the alter ego of Danny Baker, a guitar teacher and studio musician from North Carolina. Reviving the sounds and modes of country music from its golden era with a Gothic and comedic twist, Unknown Hinson has garnered a devout cult following over the years from his entertaining songs, hilarious persona, and blazing guitar licks.