Valerie June is “Pushin’ Against A Stone” No More 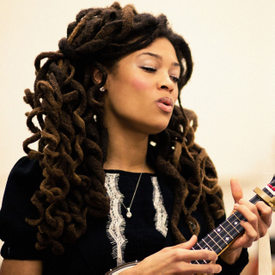 I know very little about Valerie June, and aspire to keep it that way. A natural mystery swirls around this woman similarly to the tresses emanating from her topside like a living, organic crown. Valerie June seems more apparition than woman—vanishing and appearing in the most random moments like a mythical character born in the mind of an early European troubadour that goes on to become a seminal player in mythology. She’s like a damsel in the middle of some struggle pitting man vs. Gods for the right to sit in audience with her siren melodies; the Gods coveting the beauty of her tone, but the claim belonging to man since the vessel of such beauty is a mortal. The imagination Valerie June can evoke is a greater audio enhancement than any studio magic can muster, and is one of her music’s greatest attributes.

At the same time, Valerie June is as real as wood. If cut, she would bleed Memphis blue. Valerie’s first high stakes effort to leave her musical mark on Earth comes in the form of the new album Pushin’ Against A Stone. In the past, the songstress has moved so smoothly between so many different versions of American music that this new album could have taken us in many different directions. She could have gone down a country road, or pursued a blues or bluegrass sound, and done any of these with adeptness.

Instead what we get is a record that is easier defined by geography than genre. Pushin’ Against A Stone is the sound of Memphis if it could ever be defined by one album. It is the sound of the city expressed through this native Memphis girl in the form of sweaty horns and soul, mournful, bellowing lyrics, and a spirit of defiance. It is like the streets rising up in a blue collar orchestra, expressing pain and struggle, and a yearning for redemption and victory.

I hate to break it to country fans, but the twangy moments in Pushin’ Against A Stone are fleeting, though there are a few. More present is this classic, AM-dial, analog, tube-like film that rests upon Valerie’s music like a layer of lounge smoke. There are a few outright Phil Spector moments on this album, drawing very heavily from the 60’s vibe to give character to Valerie’s simple, but soul-drenched tunes. 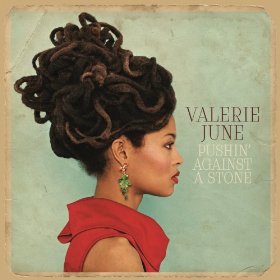 The album starts off with the sweaty “Workin’ Woman Blues.” Valerie’s supple tone comes piercing through immediately, setting the table for the rest of the album, and when the horn section joins in, the song sits down in one of those deep grooves whose rhythm can only be outmatched by the human heartbeat. Organ, fiddle rise up to accompany Valerie in the dreamy “I Need Somebody.” “The Hour” takes you directly back to Memphis-inspired Motown. The dark and sparse “Twined & Twisted” is one of those songs that sounds so vital and classic, you swear it is from a century ago.

The funky “Wanna Be On Your Mind” stands with “Workin’ Woman Blues” as the album’s most robust and accessible tracks. “Tennessee Time” is where Valerie finally tunes into her country roots, while “Trials, Troubles, Tribulations,” evokes Valerie’s background in Gospel. Then it’s back to rock and roll in “You Can’t Be Told.” “Shotgun” is the album’s sleeper track, allowing Valerie to stretch her wings both vocally and artistically. It’s murderous storyline is helped along by an avant-garde tempo that both rushes and relaxes to enhance the story, while the space is filled with pain and a sawing slide guitar that is wielded like a weapon of revenge.

One concern is that Pushin’ Against A Stone works too hard to define itself through production instead of letting Valerie June stand on her own. As mentioned earlier, Valerie June before this album was like a mound of clay who could have become anything. Now the Valerie June sound has defined edges with help from producer Kevin Augnuas, though admittedly the space between those edges is quite vast and filled with great creativity. And of course pre-defined ideals of what you expect from an artist are meant to be broken, but I do think the production effort came across here a little too heavy, though in the end it is still one of the album’s positive assets.

Valerie June named this album Pushin’ Against A Stone to symbolize the struggle she has gone through to get her music to a wider audience. With this release has come the wide attention of the roots world, and it couldn’t be more deserved. Congratulations Valerie June, that stone is now rolling.

Purchase Pushin’ Against A Stone from Valerie June